The James Bond movies have by now taken on the discipline of a sonnet or a kabuki drama: Every film follows the same story outline so rigidly that we can predict almost to the minute such obligatory developments as (1) the introduction of the villain's specialized hit man; (2) the long shot that establishes the villain's incredibly luxurious secret hideout; (3) the villain's fatal invitation to Bond to spend the night; (4) the moment when the villain's mistress falls for Bond; (5) the series of explosions destroying the secret fortress, and (6) the final spectacular stunt sequence.

Connoisseurs evaluate the elements in a Bond picture as if they were movements in a symphony, or courses in a meal. There are few surprises, and the changes are evolutionary, so that the latest Bond picture is recognizable as a successor to the first, "Dr. No," in 1962. Within this framework of tradition, "Licence to Kill" nevertheless manages to spring some interesting surprises. One is that the Bond character, as played now for the second time by Timothy Dalton, has become less of a British icon and more of an international action hero. The second is that the tempo has been picked up, possibly in response to the escalating pace of the Rambo and Indiana Jones movies. The third is that the villain has fairly modest aims, for a change; he doesn't want to rule the world, he only wants to be a cocaine billionaire.

I've grown uneasy lately about the fashion of portraying drug smugglers in glamorous lifestyles; they're viewed with some of the same glamor as gangsters were, in films of the 1930s. Sure, they die in the end, but they have a lot of fun in the meantime. In "Licence to Kill," however, the use of a drug kingpin named Sanchez (Robert Davi) and his henchmen (Anthony Zerbe, Frank McRae) is apparently part of an attempt to update the whole series and make it feel more contemporary.

There are still, of course, the obligatory scenes. The film begins with a sensationally unbelievable stunt sequence (Bond and friend lasso a plane, then parachute to a wedding ceremony). But then the action switches to the recognizable modern world in and around Key West, Fla., where the British agent finds himself involved in an operation to capture Sanchez and cut his pipeline of cocaine.

Like all Bond villains, Sanchez has unlimited resources and a beautiful mistress. His operation uses an underwater shark-nabbing company as its cover, and keeps a few sharks on hand so they can dine on federal agents. After Bond's friend, Felix Leiter, is mistreated by the bad guys, 007 begins a savage vendetta against Sanchez, which involves elaborate and violent stunt sequences in the air, on land, and underwater.

He is aided in his campaign by the beautiful Pam Bouvier (Carey Lowell, introduced as "Miss Kennedy, my executive secretary"), and saved more than once by Sanchez' beautiful mistress, Lupe Lamora (Talisa Soto). Both women are as beautiful as the historical Bond standard, but more modern - more competent, intelligent and capable, and not simply sex objects. This is no doubt part of the plan, announced before Dalton's first Bond picture, to de-emphasize the character's promiscuous sex life. Compared to his previous films, 007 is practically chaste this time.

My favorite moments in all the Bond pictures involve The Fallacy of the Talking Killer, in which the villain has Bond clearly in his power, and then, instead of killing him instantly, makes the mistake of talking just long enough for Bond to make a plan. The fallacy saves Bond's life two or three times in this movie - especially once when all that Davi has to do is slice his neck.

"Licence to Kill" ends, as all the Bond films do, with an extended chase and stunt sequence. This one involves some truly amazing stunt work, as three giant gasoline trucks speed down a twisting mountain road, while a helicopter and a light aircraft also join in the chase. There were moments when I was straining to spot the trickery, as a big semi-rig spun along tilted to one side, to miss a missile aimed by the bad guys. But the stunts all look convincing, and the effect of the closing sequence is exhilarating.

On the basis of this second performance as Bond, Dalton can have the role as long as he enjoys it. He makes an effective Bond - lacking Sean Connery's grace and humor, and Roger Moore's suave self-mockery, but with a lean tension and a toughness that is possibly more contemporary. The major difference between Dalton and the earlier Bonds is that he seems to prefer action to sex. But then so do movie audiences, these days. "Licence to Kill" is one of the best of the recent Bonds. 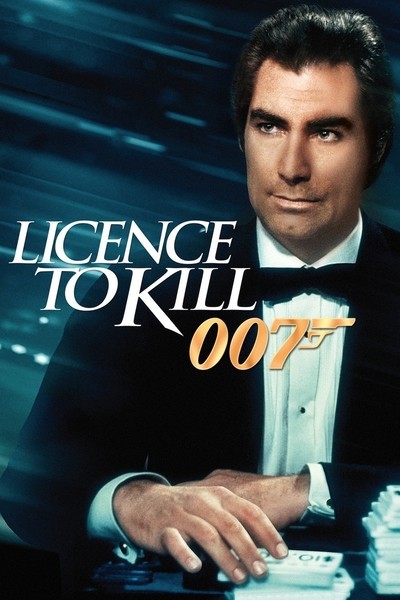