Darn right, I wanted to yell at the pigtailed animated 3-D character who tries to pass herself off as the endearing Midwest farm girl we know and love in "Legends of Oz: Dorothy’s Return," a charmless and mirthless travesty of a sequel to the 1939 classic "The Wizard of Oz."

To be honest, I have not read the book—"Dorothy of Oz," written by original Oz author Frank L. Baum’s great-grandson, Roger Stanton Baum—that this present-day movie is based on. But judging from the summaries online, I am pretty sure that it was the filmmakers who decided that Dorothy (overloaded with Young-Adult literary heroine spunk by Lea Michele of TV’s "Glee") should randomly wear cowboy boots, Glinda the Good Witch (an ill-used Bernadette Peters) should sound and look like an anesthetized Barbie doll and the Winged Monkeys should sport distracting neon-hued Mohawk hairdos. Instead of being the very essence of creepy this go-round, these hench simians are little more than hairy gnats just asking to be swatted away.

None of these additions compensate for the rather rote narrative, off-putting characters, awful jokes (do we really need to see Toto eye a fire hydrant with potty-time intent?) and a middling mish-mash of song styles that includes rock, love ballads and show tunes. The quality of the animation is passable, with only one memorable use of 3-D, but the vocal acting feels to be heavily under the influence of the louder-is-funnier school of inferior Saturday-morning cartoons. Given that directors Will Finn and Dan St. Pierre are both Disney veterans, they should know better.

Of course, it is futile to think this effort, which picks up the story on the day after Dorothy’s first trip to the Emerald City as she awakens in her tornado-battered Kansas homestead, would ever live up to the timelessly enchanting MGM musical with Judy Garland. I tried to keep an open mind, despite being disappointed previously in varying degrees by such Oz-influenced movie spin-offs as "The Wiz," "Return to Oz" and the recent "Oz the Great and Powerful." (Probably the only way this long-running curse will be broken is if and when they ever do a film adaptation of Broadway’s "Wicked," although the similar "Frozen" has already stolen some of its thunder.)

But it did not take too long to feel disheartened by what was happening onscreen, especially when the radiant symbol of Dorothy’s hopes and dreams that are beyond her reach is suddenly demoted to a pedestrian form of transportation known as a “rainbow mover.”

Dorothy is summoned back by her three faithful friends from before, the Scarecrow  (Dan Ackroyd), the Tin Man (Kelsey Grammer) and the Lion (Jim Belushi), to once again restore order in the fantasy land that is now under the command of an evil Jester, the Wicked Witch of the West’s harlequin-costumed brother (Martin Short, stuck in much-too-much mode).

Now that each member of this trio has been previously granted a gift by the Wizard  (who smartly kept out of this picture), the supposition is that they are totally different personalities. The Scarecrow with his brain is now an overbearing know-it-all, the Tin Man with his heart is even more of an overly sensitive drama queen and the Lion with his courage is a brash brute bordering on a bully. What’s lost from the original "Oz," however, is the idea that the threesome had these strengths all along and just didn’t know it. Now they seem like super-sized versions of their previous selves and not all that pleasant to be around.

The device of having characters in the Kansas sequences that later re-appear in an altered guise in Oz is used again, most notably with the Jester. In the real world, he is known as the Appraiser, an opportunist in a long purple coat who forces the citizens of Dorothy’s rural community out of their storm-damaged abodes while claiming the condemned properties for himself. As Aunt Em and Uncle Henry complacently pack up to leave, Dorothy nervily questions this interloper’s authority, asking, “Are you with the government?”  The Appraiser replies with a sneer: “We’re government adjacent.”

This exchange as well as the ending of the movie suggests some sort of hidden political agenda is afoot, although what it is exactly is not clear.

Once Dorothy arrives in Oz, she proceeds to basically repeat her previous journey by following the Yellow Brick Road, although with different stopping points—Candy County, Dainty China Country—and new companions. They include a chubby owl named Wiser (Oliver Platt), a kindly marshmallow guard (Hugh Dancy), a china doll princess (Megan Hilty of TV’s "Smash," who at least sings heartily) and a talking tree (Patrick Stewart) who generously allows himself to be used for a boat.

Meanwhile, the Jester employs his sister’s broom and crystal ball to change various Oz VIPs into marionettes and imprison them in boxes, including Glinda. It’s only a matter of time before the good guys save the day—under 90 minutes, thank goodness.

I am guessing toddlers who have yet to be exposed to "The Wizard of Oz" will be the only satisfied customers, although the little ones in my audience barely made a peep throughout the running time. This is one of those movies that parents will have to ask themselves if they love their child enough to sit through it.  At least "The Nut Job" is off the hook as the worst indie-made animated feature of the year. 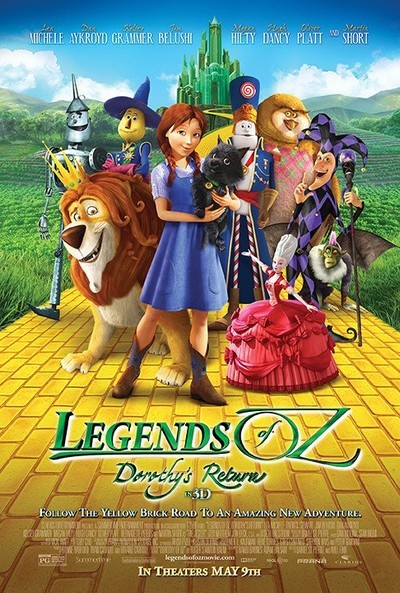 Rated PG for some scary images and mild peril

Martin Short as The Jester (voice)