When news hit that French cinema master Jean-Luc Godard chose to end his life via assisted suicide in Switzerland just weeks ago, many interpreted it as the act of an iconoclast dying on his own terms. Given his artistic stature, the decision was perceived as the ultimate statement on the same freedom that characterized his filmic oeuvre.

Yet, as proven in Ondi Timoner’s unbelievably personal, profoundly bittersweet, and occasionally disquieting documentary “Last Flight Home,” having agency over one’s final departure isn’t exclusively reserved for those existing in conflict with the status quo. Her father, Eli Timoner, no less remarkable than Godard to his loved ones, was resolute on exercising California’s End of Life Option Act—only available to terminally ill adults.

But while several European nations protect this course of action within stringent limitations, on this shore—where even the right of pregnant people to an abortion elicits irrational reactions from religious sectors of the population—the topic remains controversial. Only 11 states in this country permit what’s known as “medical aid in dying.”

Timoner, however, doesn’t concern herself with any ideological debate over the morality of her elderly dad’s chosen passage into the afterlife. Instead, she illustrates the value of people having this resource through her family’s first-hand experience. For her, the subject transitioned from theoretical talking point to a hard-to-face reality. Still, the lack of big-picture context on the issue ultimately comes across as a missed opportunity to inform.

Once Eli, bedridden and in need of around-the-clock care, demands the countdown to his death start with an initial doctor’s assessment, he never changes his mind. The last 15 days leading up to the event provide “Last Flight Home” with a built-in structure to which the filmmaker attaches multiple interviews with her siblings: Rachel, a rabbi, and David; as well as their mother Lucy at different stages in the ordeal of confronting mortality.

As clear as the project's arc is, Timoner’s assembly of the interviews, minimal archival elements, and footage of Eli tends to be disjointed with unflattering editing choices—particularly the transitions between each of the days we witness and even within each of the segments per a single day. The overall aesthetic of this effort is more akin to that of an episodic reality television series than inventive storytelling.

It’s only once we are acquainted with the nuclear family, one third into this explicitly finite story, that Timoner shares details on Eli’s 1982 stroke that left him partially paralyzed for the next 40 years and of his once successful professional career as a higher-up at the now defunct air carrier Air Florida. But the bulk of the images immortalize Eli as he lovingly and lucidly interacts with in-person visitors and loved ones over Zoom to say goodbye despite his weakened state.

Besides the impressive number of encounters, it’s the warmth and sincerity in all of them—including longtime friends and former employees—that communicates the kindness that characterized Eli. There’s a soothing luxury, it may seem, to knowing when your last day will be because it allows time for making amends and unhurried farewells.

Even as the chapters in "Last Flight Home" turn slightly repetitive, it’s nearly impossible not to be moved at the displays of preemptive grief and flares of joy on days when Eli seems the most present. His efforts to engage as effusively as possible with those around him feel like selfless acts to protect his family’s hearts from the inevitable pain that his chosen fate will soon cause them. He tries to be there, truly till the end.

Among the most heartsick sequences are those between Eli and Rachel, on double duty as mourning daughter and spiritual guide. The latter hopes to free her frail father from his long-held belief that his financial failures after the accident rendered him a perennial burden. Such is Eli’s desperation to do right by his children and wife that he makes plans to look over them consistently from wherever his soul finds a home elsewhere.

Eventually, the closer the announced resolution gets, the more insular Timoner’s narrative becomes. She tries to capture every single exchange between Eli and his grandchildren. And she exhibits frustration at her mother’s lack of urgency to spend time with her life partner. Under such strenuous personal circumstances, one would understandably expect anyone to become overwhelmed with emotion. Filmmaking should become secondary.

At its best, “Last Flight Home” unfolds as a celebration of Eli’s life while he still can enjoy the testimony of the strong impressions he left on others over more than 90 years. That in your final moments on this plane you can see the scale of your life tip towards love and not resentment is a privilege he undoubtedly earned. But as much as one feels honored to be let into the innermost pain of a group of strangers, perhaps some moments should remain sacred and only for the eyes of those directly involved. 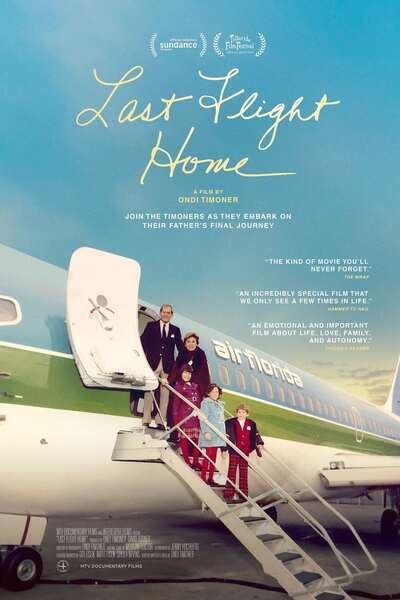