Robin Wright’s directorial debut “Land,” premiering this weekend at the Sundance Film Festival, is a confident drama about multiple forms of isolation. Edee (Wright) is isolated emotionally by a horrible tragedy and the lingering grief that has made her suicidal. Almost as if she’s trying to mirror how alone she feels on the inside, she isolates herself physically too, going to a remote cabin and trying to live off the land. Wright’s film is a lyrical character study about two deeply pained people who find purpose in one another. Even as the vast landscape around them seems to recall the insignificance of one person against the beauty of Mother Nature, “Land” suggests that isolation isn’t the answer and connection is what matters. It’s a smart, moving piece of work, hampered a bit by a rushed final act that feels somewhat manipulative but confidently acted throughout.

Wright does a great deal of character work in the film’s first half-hour with almost no dialogue. The long opening credits find Edee driving to a remote cabin in the mountains. When she tells the man who guided her there to come and get the rental car when he can, he suggests that it’s safer to have a vehicle up here. Edee doesn’t care about safety. There’s a lack of preparation for what’s about to face Edee that almost leans into the flashbacks that hint at her suicidal nature following an undisclosed tragedy. It’s as if Edee is fine with the Earth reclaiming her. She doesn’t know how to hunt or trap; she doesn’t have enough supplies; winter is coming. If she dies out here, so be it. It's almost like watching someone slowly drown, hundreds of miles from the ocean.

Writers Jesse Chatham and Erin Dignam withhold the details about what has driven Edee to a place that almost feels built by Mother Nature to kill her other than brief flashbacks to a sister named Emma (Kim Dickens) begging Edee not to commit suicide and glimpses of a man and a boy, who it becomes clear are Edee’s lost family. At its core, “Land” is a story of unimaginable grief, the kind of pain that reshapes the landscape. Imagine something so horrible happening to you that the world around you looks entirely different—why not change your setting as extremely as moving from the city of Chicago to the Rocky Mountains? As a performer, Wright smartly imbues Edee with what almost feels like constant pain in the film’s first act. It’s such a stark, gloomy story that we start to feel Edee’s non-stop sadness with her.

And then “Land” shifts gears by introducing a hunter named Miguel (Demián Bichir) and a nurse named Alawa (Sarah Dawn Pledge). Not only do they save Edee’s life, Miguel becomes an unexpected ally and even teacher. He promises not to tell Edee anything of the outside world, maintaining her self-isolation, and he doesn’t say much. He’s going to give her the tools to survive, and then be gone. And he has some trauma and grief of his own to bring on the hunting trip.

As a director, Wright and cinematographer Bobby Bukowski (“99 Homes”) strike a nice balance between lyrical shots of the gorgeous backdrop and close-ups that reveal their characters’ trauma. It’s a beautiful film that also never loses its sense of danger. There's a shot late in the film in which Edee is standing near the edge of a cliff and I was convinced she was going to fall. "Land" has a finely tuned balance between the beauty of this world and the fact that that beauty hides so many aspects that can kill you, from bears looking for food to brutal winter snowstorms to, yes, cliffs. Anne McCabe & Mikkel E.G. Nielsen’s editing deserves praise for finding this balance too.

However, “Land” works best as a performance piece for two excellent actors. Wright nails every aspect of this character, particularly the way she internalizes her grief and uses that empty pain to push herself to survive. Bichir matches her with a very different performance that’s no less powerful. Neither character gets much to say—and the dialogue is often the weakest aspect of the film in that it’s sometimes a bit too unrealistic—but that allows Wright and Bichir to do a great deal of physical acting. Most importantly, they sell how these two people end up needing each other without resorting to melodrama. They have chemistry as two fully believable, three-dimensional characters unexpectedly sharing the same space.

Some of the final scenes of “Land” feel unearned, and I found the film far more effective in its silence than its dialogue. A simple shot of a man sitting on a porch with his eyes closed, the sun on his face, can be more powerful than an overwritten monologue.

The song “Everybody Wants to Rule the World” by Tears for Fears becomes a recurring joke in “Land” as Miguel sings it a few times, and it’s tempting to pull apart the lyrics and how they reflect in the story of the film. After all, it does feature the lines “Turn your back on mother nature” and “It’s my own design/It’s my own remorse,” both of which could sound explicitly like they’re about Edee’s story. However, there’s a line in the chorus that is also important to remember when it comes to depression and grief, emotions that can sometimes feel like they’ll never end: “Nothing ever lasts forever.”

This review was filed in conjunction with the world premiere at Sundance on January 31st, 2021. It will open in theaters on February 12th, 2021. 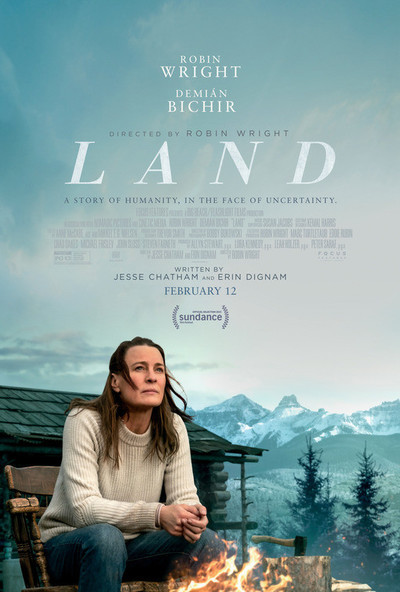