The fourteen-hour Argentinian movie "La Flor" is a theoretically interesting, but consistently unrewarding formal experiment. Writer/director Mariano Llinas appears onscreen early on to set up the film’s unusual narrative structure: six story fragments (four without an ending, one without a beginning, and another without a start or finish), none of which are overtly related to the other beyond the recurring appearance of actresses Elisa Carricajo, Valeria Correa, Pilar Gamboa, and Laura Paredes. Each vignette is (basically) representative of a different genre: Episode 1 is a horror film in the style of “American B-movies,” Episode 2 is (kind of) a musical, Episode 3 is a spy-thriller, etc.

Llinas uses these incomplete, semi-deconstructed sketches to over-stress the tyranny of story-driven movies given the general shallow-ness of (movie) genre tropes and (cinematic) character development. There’s even a story about a filmmaking crew that struggles to make a movie about trees, as if Llinas were desperate to underscore how much fun it is to not see the forest for the eucalyptuses. If only his boring meta-comedy conveyed the joys of exploratory rambling instead of just being the arthouse cinema equivalent of strung-out Quality TV dramas like “Lost” or “Westworld:” I am impressed by how much space it takes up and never want to see it again.

Divided into four parts, “La Flor” is an event film whose ideas and pleasures are ostensibly revealed while you watch. In “Episode I,” we get a tale of the supernatural that’s seemingly about the pleasure of waiting for something to happen, though an ancient mummy does eventually transfer its gluttonous, flesh-eating spirit from its desiccated human body to a feral cat and then a hapless scientist. “Episode 2” is less straight-forward, thanks to its momentum-crushing reliance on banal flashbacks and scads of expository dialogue: a group of frustrated musicians, who are struggling to collaborate on a project, explain (at length) why that project isn’t quite coming together, until all their talking finally paves the way for a transformative musical performance. This song number (the highlight of “La Flor”) is presumably allowed to resolve some of the movie’s otherwise unresolved narrative tension, because “La Flor” is more about performance and collaboration than narrative utility, or something (ie: it’s beautiful in a purely ornamental way, as Llinas explains in this characteristically unfocused, academic Cinema-Scope interview).

“La Flor” starts to become more overtly about what it’s about—improvisation and exploration for its own sake—in “Episode 3,” a hideously distended spy thriller that’s divided into three interminable parts. Episode 3 is basically a bad shaggy dog joke, except the joke is about the perfunctory and unrevealing means by which most story-tellers try to appease viewers’ interest in understanding and relating with fictional characters—in this case, a group of spies who converge on an airfield while they wait to escape and/or be killed—through flashbacks, voiceover narration, and tangential backstories. But Llinas often seems to be joking at viewers’ expense given how deliberately frustrating, unfocused, and/or meaningless his stories are. The difference between Episodes 1 and 2 and 3-6 is that after a while, Llinas explicitly lets viewers in on the joke: he doesn’t care about linear, neat stories, and neither should we. I mean, ok, that’s definitely the premise for a film and/or a college exam. But can it be compelling unto itself, too, please?

Sometimes, I guess. Llinas’s characters often repeat themselves to each other—as in Episode 2: “Do you know the story?” “The story?” “Our story. The story.”—but their ping-ponging dialogue has no snap, just a restless energy. And most of the movie’s deliberately overheated voiceover isn’t very interesting, like when a narrator from the third part of “Episode 3” observes that one spy “didn't look like an assassin or a guerrilla woman. Rather, she looked like a little girl who had got a couple of scratches riding her bike." Even the film’s funniest jokes are distracting for how shapeless they are: Llinas’s actresses are clearly talented and work as an ensemble, but they’re also obviously just riffing on some ideas without a clear goal in mind. That high-wire act can be impressive for a while (on an intellectual level, anyway), but is eventually just belabored and monotonous. We get it, you act.

Llinas treats viewers to some of his movie’s most beautiful images towards the end of “La Flor,”especially in “Episode 5,” a silent homage to Jean Renoir’s “A Day in the Country”: two couples flirt with each other and enjoy an afternoon idyll together. But by this point, watching “La Flor” is like being on the last legs of a road trip with a group of people you’ve grown increasingly alienated from. Look at the happy artists, they’re having fun playing with themselves; good for them, can I go home now? 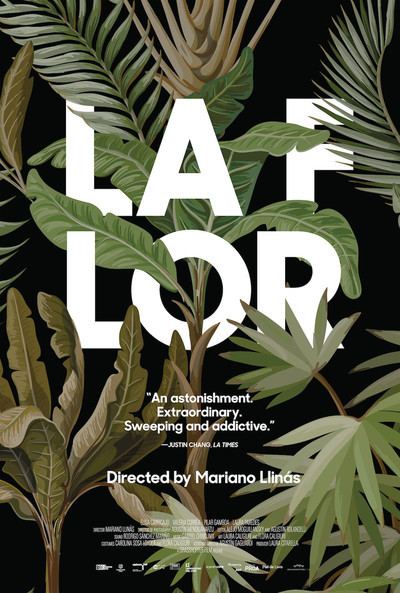