I was initially put off by the sometimes crass, sometimes glib tone of "Knife+Heart," a French period thriller that sometimes feels like a dumb tribute to Italian gialli, the kind of sleazy thrillers that (in the 1970s and 1980s) combined elements of whodunit mysteries and slasher horror movies. I often rolled my eyes at the kitschy, broad humor that "Knife+Heart" director Yann Gonzalzez (who co-wrote the film with Cristiano Mangione) sometimes used to characterize his sexually active queer characters. Partly because I knew that "Knife+Heart" follows sexually active gay characters and is set in Paris just before the AIDS crisis of the 1980s.

But mostly because the movie begins with a joyless and gross murder: a mask-wearing killer ululates like a wounded animal while he repeatedly stabs his young lover with a black, dildo-shaped dagger. That scene's glib tone carries over into almost every scene where the movie's protagonists—who are all, in some way, involved with the making of gay male-on-male pornography—either film or exhibit their own dirty movies. These movies within the movie are a little too kitschy, and that makes it difficult to sympathize with the protagonists' heavy concerns: Is it ok to seek out romance, to be sexually active, and to be openly gay at a time that we now know was dangerous for queer lovers?

In their movie's better moments, Gonzalez and Mangione's refuse to soften up Anne (Vanessa Paradis), an emotionally volatile, but basically sympathetic producer of low-budget gay porn. Which is saying something since Anne is pretty desperate when we meet her. She's just been dumped by reclusive film editor Lois (Kate Moran) and isn't too proud to beg Lois to be taken back. Multiple times, even. Paradis, as Anne, pleads with a raw intensity that carries over into crying, touching, and other forms of unsolicited clinginess. Her character is also clearly turned on by Nans (Khaled Alouach), a young construction worker whose stand-out features are completely superficial: he's young, un-self-conscious, and very ... familiar.

To Anne, Nans looks just like Fouad (also Alouach), the star of some of her favorite older productions. But Fouad is long gone—or so we're told—and Nans isn't exactly what Anne wants him to be. Though she does, essentially, seduce him when she asks him to star in her films. Not an easy task since Nans isn't dumb enough to roll over when Anne assures him that she only sometimes produces gay porn. He hesitates to agree to anything, so she half-taunts, half-challenges him: "I pegged you as more modern." After this brief encounter, Anne returns to her car with a big smile: even if Nans says no, she'll find new talent for her films, just by scouring the nearby work-sites.

Meanwhile: Anne's friends are systematically being murdered by the above-mentioned masked killer. Though honestly, most of these guys aren't Anne's friends—they just party with her and have unsimulated sex in her movies. Gonzalez and Mangione never out-right accuses Anne of exploiting her randy actors, but the implication often hangs over her head, like when she watches one of her older movies, or when she tries to get handsy with Lois.

And in time, even Gonzalez and Mangione's broad application of gallows humor makes sense, especially when you think of Anne's porn as an extension of the dream-like scene where she watches a grisly cabaret act at a gay night club. The other attendants—all smoking, well-dressed, drinking—laugh along with the scene's on-stage performers: two older women, both in fish-net stockings, one of whom begs the other (dressed in a cabaret-friendly bear costume) to maul her. The bear complies and claws at her lover with her extra-long nails. In this grand-guignol-style setting, the victim understandably over-performs her own eulogy: "Yesterday, we came. Tomorrow, we die." I don't buy Anne's fantasies, but I do believe that she's real. 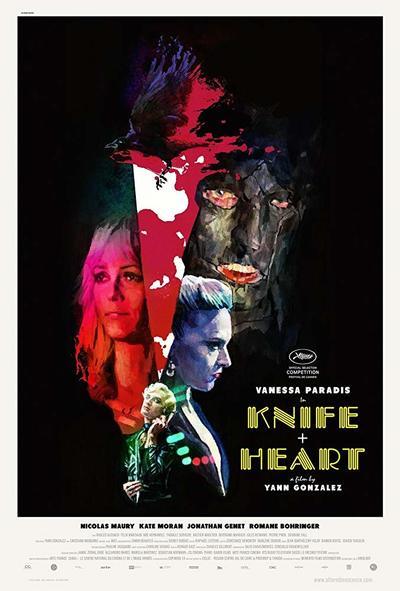