The indie sci-fi film "Kill Switch" is the worst kind of science-fiction film: the kind that coasts on a central gimmick instead of delivering visceral or intellectual thrills. The gimmick in this case is that we navigate an alternate Earth as it's experienced by personality-less cypher Will Porter ("Legion" star Dan Stevens), a former astronaut on a mission to save Earth from an evil mega-corporation.

Director Tim Smit's extensive use of subjective, first-person photography is nothing new if you've played recent video games, many of which present events from the lead character's perspective. But action movies like last year's "Hardcore Henry," and a recent rise in the prominence virtual reality technology have (presumably) given viewers a growing curiosity for more video-game-like media. The thrill of exploring a completely foreign world as if you are actually there is still novel. Unfortunately, "Kill Switch" is not only cobbled together from other, superior films—it also fails to articulate what makes those other movies/ideas interesting.

Will makes bad judgment calls throughout "Kill Switch" that, if you watch enough movies, might make you question just how much time co-writers Charlie Kindinger and Omid Nooshin spent writing the film's screenplay. Will's myriad tactical errors will also make you question the character's limited personality, let alone his sanity. After all, what kind of man signs on to work with Alterplex, a megalithic, mysterious company that promises to draw energy from an alternate Earth in order to power our planet in perpetuity? Doesn't that sound like something a bad guy would promise? Yes, they also promise to take care of Will's family ... should he agree to take on a mission that is never explained in great detail.

Granted, there are elliptical gaps in our knowledge of what Will has experienced before he wakes up on an alternate Earth. Many of these gaps are filled by flashbacks that slow down what little momentum the film has. But let's deal with what we do know: Alterplex is represented by Abigail (Berenice Marlohe), a chilly company shill who withholds whatever information she must ... until she winds up stuck in the line of fire with Will. Will wakes up on what he surmises is an alternate Earth. He is immediately attacked by giant Alterplex drones and friendly colleague Michael (Tygo Gernandt), now an anti-Alterplex freedom fighter. Will, armed only with a glowing black box that everybody seems to want, must travel back to Alterplex's main structure. Along the way, he dodges the above-mentioned flying killer robots, plus giant airplanes, freighters, and other ships that haphazardly fall from the sky.

It doesn't take a rocket scientist to figure out that Will is working for bad people. Which is a shame, because apparently Will is not that smart. His struggle to make sense of how he could have been betrayed is laughably silly. It also doesn't reveal much about the world we live in. Will's ignorance and selfish desire to protect his own family above everyone else really doesn't say much about him. The whole point of this story is to realize that you can do the wrong thing for the right reasons simply by assuming you are being altruistic when in fact you are making other people's problems all about you.

Will ultimately does learn that he has to make a sacrifice in order to make things right. But his road to self-abasement isn't very eventful. He gets shot at a lot. And he meets up with rebels that he immediately assumes must be bad. And he thinks about his family.  But at no point does Will tell us who he is beyond a blind will to get from plot point to plot point. He is to expository dialogue what Pez dispensers are to crummy fruit-flavored candy.

Much of "Kill Switch" feels like an excuse to try out a new style of storytelling. If I were more cynical, I'd call this movie a calling card film, a klutzy attempt at jump-starting a movie career with nothing but gimcrack special effects, and low-budget ingenuity. Unfortunately, "Kill Switch" usually feels like a series of encounters you might find much more entertaining if you were controlling Will in a video game. You might have fun in that context because at least you would have the illusion of free choice, and could therefore enjoy the navigating an alien world at your own pace. "Kill Switch" is, by contrast, limited to the story that Kindinger, Nooshin, and their collaborators chose to tell. Pez dispensers are fine for what they are. I just can't imagine them becoming the latest way to experience a movie. 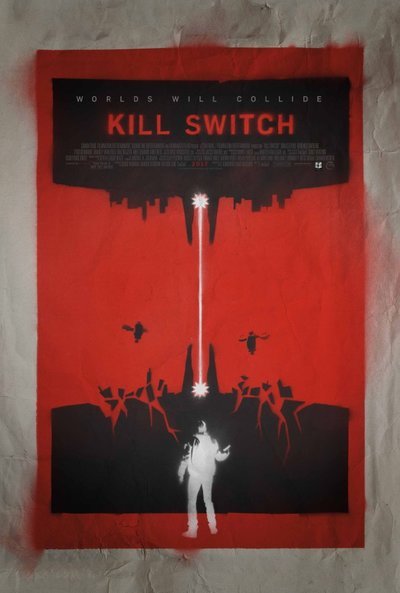 Dan Stevens as Will Porter