A riveting documentary about a young Hungarian neo-Nazi leader whose life is upended when he discovers his Jewish roots, Joseph Martin and Sam Blair’s “Keep Quiet” would be valuable and important if it only told of one man’s journey from bigotry to repentance. But this expertly made, highly dramatic film achieves must-see status for the inevitable light it sheds on the persistence of toxic racial hatreds not just in Hungary but worldwide.

If you believe one leading Nazi, though, Hungary is something of a special case. According to Adolf Eichmann, the Germans had an easier time rounding up and exterminating that nation’s Jewish population because it had so many willing local accomplices. One memorial we see in the film shows replicas of shoes next to the Danube, marking the spot where numerous Jews were killed by a single bullet: the one victim was roped to others who were dragged to their deaths when he fell in the river.

Cut to the 21st century and, almost unbelievably, that kind of hatred is enjoying something of a revival. As the film chronicles briefly in its opening minutes, a bad economy led to the rise of nativist right-wing parties such as Jobbik, one of whose leaders was a burly, charismatic firebrand named Csanad Szegedi. Although another extremist organization he helped found, the Hungarian Guard, was so blatantly fascist the government outlawed it, Szegedi personally enjoyed a rapid political rise, being elected to the European Parliament in 2009 at the age of 27.

The Jobbik belief system includes forthright anti-Semitism, with its depressingly familiar web of canards about Jews controlling finance and media worldwide so as to oppress innocent, patriotic white Christians. While no one openly advocated the revival of the Nazis’ extermination policies, Szegedi and his cohorts regarded the official histories of the Holocaust with a mixture of disbelief and derision.

So it was more than a minor blow when one of his right-wing comrades, a gnarly, twitchy farmer who deserves his own David Lynch movie, confronted him with proof of his Jewish ancestry. We hear a tape recording of their conversation, and it’s clear that Szegedi’s whole identity will almost instantly be blown to smithereens. And so it is. His political career in Jobbik is over. One can’t help but wonder how he saw his options at this point. Surely he could have just retreated from public life but retained his beliefs.

Instead, he underwent a rapid conversion, looking into his family history and embracing the Jewish faith. A key person in his life is his grandmother, who said nothing about being Jewish when he was being raised and then becoming a leader in anti-Semitic organization. Somehow he never saw the number tattooed on her arm that identifies her as a survivor of Auschwitz. She is a lovely elderly lady when we see her in conversation with Szegedi, who moves her emotionally by having her mother’s grave restored.

In discovering Judaism, Szegedi finds an invaluable ally, friend and champion in Rabbi Baruch Oberlander, who instructs him and oversees his embrace of various rituals incliding circumcision. A wry, articulate man, the Rabbi evidently never doubts Szegedi’s sincerity, but other Jews do. At gatherings in Berlin and Montreal, he tries to make public confessions of his hate-filled past and new faith, but some denounce him as a fraud. No doubt the apparent ease and rapidity with which he replaced one identity with another can’t help but engender suspicions.

After his grandmother dies, Szegedi makes a pilgrimage to Auschwitz with an elderly Holocaust survivor. This woman’s recollections are some of the most vivid and moving I’ve ever encountered. She recalls how some Jews arriving from distant locations had no idea what was about to befall them, while others from nearby knew full well and were pushed into the gas chambers screaming. She remembers being separated from her parents and brothers, whom she never saw again.

Given how recent such horrors took place, it’s disturbing in the extreme to see young Europeans today—like Szegedi as a Jobbik leader—embrace the same kind of bigotry that led to them. In some ways, this provides a chilling reminder that anti-Semitism of the European variety has roots that stretch back many centuries if not millennia. Americans might find a small bit of comfort in the fact that it has never been as prevalent or deeply rooted here; yet other forms of hatred surely have, and this film can’t help but resonate with those who’ve been discomfited to see a presidential election won by a candidate who appealed to fears about Mexicans and Muslims.

The film’s title, incidentally, comes from Szegedi’s grandmother. She says she’s sure that pogroms like the one she endured will visit Hungary again. What, she’s asked, should Jews do to avoid being targeted again? “Keep quiet,” she says. Fortunately, it’s advice that her grandson and this film’s makers don’t take. 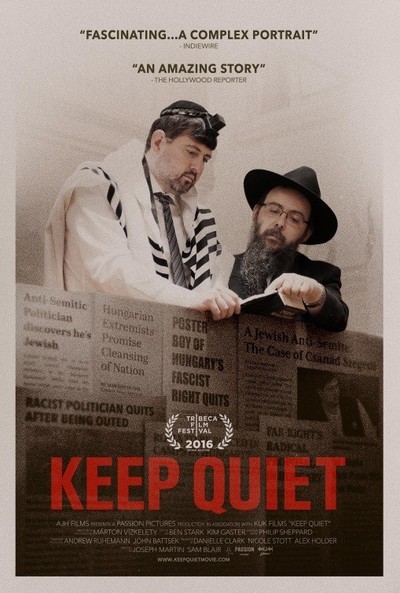