Keep on Keepin' On

“When you hear Clark, you hear his life. Only a master can do that.”
—Herbie Hancock

Clark Terry is more than just a jazz legend. He’s more than just the guy who mentored Quincy Jones, and who Dizzy Gillespie and Miles Davis thought was the best trumpet player who ever lived. In Alan Hicks’ “Keep On Keepin’ On,” Clark Terry becomes something greater than just a Grammy Lifetime Achievement Award winner; he becomes an inspiration, a man who could teach us all a thing or two about craft, dedication and dealing with life's tragedies. Hicks avoids the traditional bio-doc route by turning “Keep On Keepin’ On” into more than just CT’s story, chronicling how the legendary musician continues to inspire young artists to this day, most notably an incredibly-talented blind piano player named Justin Kauflin. There is something of a sense that “Keep On Keepin’ On” doesn’t quite have the material to justify a feature-length documentary running time, and that this would have made one of the best “60 Minutes” segments ever, but Terry’s story resonates emotionally enough to make that a minor complaint.

Hicks spent five years with Terry, experiencing his 90th birthday with the remarkably open man and hearing his life story. He grew up in poverty, building his own trumpet from parts of metal he found in his neighborhood. It created such an abhorrent sound that his community rallied to get him a real instrument. And a musical legend was born. Everyone who matters in jazz music seems to have crossed paths with Terry at one point or another, most notably Quincy Jones, who was mentored by the trumpet player. He was the first black staff musician at NBC. I wish Hicks included even more about Terry’s influence on jazz history. Hearing CT (as his friends call him) reminisce about missing Duke Ellington and Count Basie, both of whom he played with, has incredible power for jazz fans. Terry may not have the household name status of his peers, but this film argues that he should.

However, that’s not Hicks’ focus. He spends much more time on 23-year-old Justin Kauflin, a blind piano prodigy who met Terry through one of the programs the trumpet player runs for young musical talent. Kauflin went blind when he was in sixth grade. No playing with friends. No video games. He sat down in front of a piano, and something beautiful came out. Kauflin’s story is one that falls into what I like to call the “perspective documentary genre.” If you think you’re having a rough day or can’t escape from whatever hole life has dug for you, Kauflin’s worldview should give you a little perspective. He simply never lets his situation get him down (at least on film). His ringtone is “Don’t Worry, Be Happy” for God’s sake.

Kauflin and Terry make a fascinating pair. Terry has diabetes, and his health worsens throughout the film. Meanwhile, Kauflin’s star is rising, which means performances that have to be faced despite his debilitating stage fright. These two men, 70 years apart, still inspire each other, and that inspiration can be infectious. “Keep On Keepin’ On” is the kind of film that should push those who have achieved master status to pass it on to another generation, and encourage those in need of guidance to find the men or women they want to be and ask them how they got there. As Terry says, it’s desire that separates masters from amateurs. And it’s nice to see two people with such desire for their craft.

Advertisement
If I’m being critical, I might argue that all of these insights are pretty crystal clear early in the running time of the relatively short “Keep On Keepin’ On.” Hicks ends his personal/jazz history of Terry relatively early, leaving us with pretty much just the dynamic between legend & prodigy to fill out most of the running time. As much as I love these guys, I couldn’t help but feel there’s a stronger, tighter TV special or short-form doc in their story. To be honest, one only needs to hear a bit of their stories or feel the passion in how they play to be moved by them. 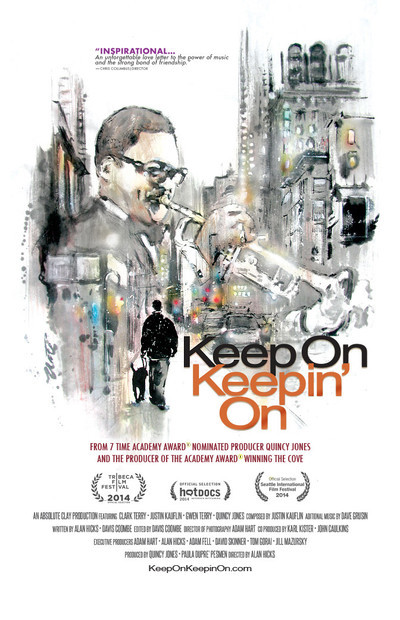