"Kagemusha" is a samurai drama by the director who most successfully introduced the genre to the West (with such classics as "The Seven Samurai" and "Yojimbo"), and who, at the age of seventy, made an epic that dares to wonder what meaning the samurai code -- or any human code -- really has in the life of an individual man. His film is basically the story of one such man, a common thief who, because of his astonishing resemblance to the warlord Shingen, is chosen as Shingen's double.

When Shingen is mortally wounded in battle, the great Takeda clan secretly replaces him with the double -- so their enemies will not learn that Shingen is dead. Thus begins a period of three years during which the kagemusha is treated by everyone, even his son and his mistresses, as if he were the real Shingen. Only his closest advisers know the truth.

But he is not Lord Shingen. And so every scene is undercut with irony. It is important that both friends and enemies believe Shin-gen is alive; his appearance, or shadow, creates both the respect of his clan and the caution of his enemies. If he is unmasked, he is useless; as Shingen's double, he can send hundreds of men to be killed, and his own guards will willingly sacrifice their lives for him. But as himself, he is worthless, and when he is unmasked, he's banished into the wilderness.

What is Kurosawa saying here? I suspect the answer can be found in a contrast between two kinds of scenes. His film contains epic battle scenes of astonishing beauty and scope. And then there are the intimate scenes in the throne room, the bedroom, the castles, and battlefield camps. The great battle scenes glorify the samurai system. Armies of thousands of men throw themselves heedlessly at death, for the sake of pride. But the intimate scenes undermine that glorious tradition; as everyone holds their breath, Shingen's double is tested in meetings with his son, his mistresses, and his horse. They know him best of all. If they are not fooled, all of the panoply and battlefield courage is meaningless, because the Takeda clan has lost the leader who is their figurehead; the illusion that he exists creates the clan's reality.

Kurosawa made this film after a decade of personal travail. Although he is often considered the greatest living Japanese director, he was unable to find financial backing in Japan when he first tried to make "Kagemusha." He made a smaller film, "Dodes'ka-den," which was not successful. He tried to commit suicide, but failed. He was backed by the Russians and went to Siberia to make the beautiful "Dersu Uzala" (1976), about a man of the wilderness. But "Kagemusha" remained his obsession, and he was finally able to make it only when Hollywood directors Francis Ford Coppola and George Lucas helped him find U.S. financing.

The film he finally made is simple, bold, and colorful on the surface, but very thoughtful. Kurosawa seems to be saying that great human endeavors (in this case, samurai wars) depend entirely on large numbers of men sharing the same fantasies or beliefs. It is entirely unimportant, he seems to be suggesting, whether or not the beliefs are based on reality -- all that matters is that men accept them. But when a belief is shattered, the result is confusion, destruction, and death. At the end of Kagemusha, for example, the son of the real Lord Shingen orders his troops into a suicidal charge, and their deaths are not only unnecessary but meaningless, because they are not on behalf of the sacred person of the warlord.

There are great images in this film: Of a breathless courier clattering down countless steps, of men passing in front of a blood-red sunset, of a dying horse on a battlefield. But Kurosawa's last image -- of the dying kagemusha floating in the sea, swept by tidal currents past the fallen standard of the Takeda clan -- summarizes everything: ideas and men are carried along heedlessly by the currents of time, and historical meaning seems to emerge when both happen to be swept in the same way at the same time. 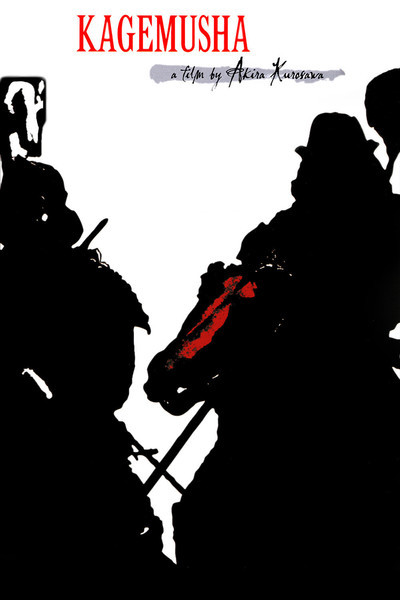 Tatsuya Nakadai as Shingen and Kagemusha