If you believe Twitter, then Justin Bieber is retiring at the age of 19. He made the announcement the day before his new movie, "Justin Bieber's Believe" opened, so we can take it all with a pound of salt. Cue the agonized screams of millions of his fans. But they've been screaming anyway, and will continue to do so, because when tween and teen girls latch onto a figure like Bieber, nothing will tear them asunder. "Justin Bieber's Believe" is directed by Jon Chu, who also directed Bieber's most recent tour, which explains its uncritical attitude towards the young star. The whole thing is obviously part of the propaganda arm of the Bieber PR machine. Incidentally, and importantly, the propaganda element of the film (showing us how hard Bieber works, how he put the "Believe" tour together, performances from the tour itself) is the best part of the whole thing. It's infectious, as a matter of fact: the enthusiasm of the entire team is infectious. And the fans? Well, they could power the entire Eastern Seaboard with their excitement. This film is for them, clearly, and so the fact that Bieber is not asked tough questions about some of his tabloid-worthy shenanigans is not a surprise. It makes the film a strangely uneven experience, and you sense that there may be some really interesting questions that could be asked and answered, if everyone could stop being so in awe of the young pop-music god in their midst.

The film opens with a casual closeup of Bieber messing around at the piano, making comments to someone offscreen, but also engrossed in his improvisation. Next we see him hanging out in a dressing room, with a wall of his shoes filling the frame, and an assistant-type is saying to him, "Do we want to shave your mustache?" First of all: the peach fuzz on his upper lip is barely visible. Second of all, the "we" is accidentally eloquent, showing the collective atmosphere of being a hugely managed superstar. By the end of the film, after seeing so much footage of Bieber hanging around aimlessly in his big house with a bunch of people, all of whom are a good 15 years older than him, and all of whom work for him, you get the sense of the isolation that fame like that creates.

The pressure of fame and its accompanying anxiety is the theme of the film, presented in a phony "suspenseful" sort of way: How will Bieber not only top himself with his "Believe" tour but how will he handle being seen as the next train wreck, that it is just a matter of time before he goes off the rails? He speaks about this with a naiveté that is both disarming and calculated (don't try that at home): when asked about becoming "a Lindsay Lohan", he says that he already knows that that is a danger, and since he knows it, then he can choose to not go down that path. The people prompting him with these questions are, again, his employees, Chu included, so Bieber's banal platitude answers are greeted with a rapt silence. Nobody digs deeper. We are shown an altercation between Bieber and a heckler in England that almost gets violent. Bieber says of the moment later, to the camera, with a soft expression, "I'm a human being with a heart." Nobody is denying that, but there's a missed opportunity in the film to really examine the stresses of fame and how Bieber is actually handling it.

It is worth considering, though, who the film is for. It's for the fans. And on that level it works. Onstage, Bieber is an appealing, exuberant and friendly presence, which is all that matters to the fans who lose their minds upon seeing their first glimpse of him, flying in above the stage attached to huge metallic wings made up of different musical instruments. He's all in white, wearing sunglasses, and as slight as his frame still is, he seems gigantic and mythic. His performances have an intimate "it's you and me in this together" thing going on, as he reaches out to the fans up front, sometimes pulling one out of the audience to sing to her. Chu films it all with a vitality that gives you the feeling that you are there. The footage of the audience is exciting, little girls sitting on their dads' shoulders, teen girls hugging and crying and holding up their phones, everyone singing along to the lyrics. Whatever his offstage antics may include, onstage Bieber is the perfect teen idol.

There are really fun scenes of the huge dance auditions held for the tour. We meet the dancers. We see the rehearsals, we see Bieber in collaboration with others. The film includes clips of home video footage showing young Bieber fans flipping out over receiving concert tickets. One girl crouches on the living room floor sobbing over her tickets and a family member says anxiously, "Those are tears of joy, right?" There's an insane shot of a girl screaming at the top of her lungs, holding her tickets, as someone off-camera keeps saying, "Okay, that's enough." But teen girls need to scream, and teen girls are the most powerful demographic on earth. Loyal, too. Make fun of them at your peril.

There's a weird "tense" section meant to be a cliffhanger of sorts, where they basically court Chu to direct the tour, all with "wacky" comedic music underneath, and we're told how everyone wants Jon Chu, Bieber wants Jon Chu, Jon Chu finds it impossible to say "no" to Bieber, and it's all a bit much considering Jon Chu also directed the film.

Justin Bieber started out as a YouTube phenomenon. It's one of the most interesting aspects of his story, because this was, from the start, a fan-driven (as opposed to industry-driven) success. Bieber is aware of that and speaks in interviews about the early days, before he was even signed, about how his fans would show up at his local concerts, pumping up the excitement about him. The fans who have been on board from the start feel a sense of ownership in Bieber. Many of them were tweens when he first "hit" (as Bieber himself was), and so they have grown up with him. Marketing teams try to manufacture that sort of fan-loyalty with the young stars they manage, but they rarely succeed, at least not to the level of the organic phenomenon that is Bieber. You never know where lightning will strike, and when it appears to strike on its own, the results are so powerful that it leaves the industry itself gasping to catch up.

In his famous "Village Voice" obituary for Elvis Presley in August, 1977, Lester Bangs said, of Elvis fans, "I mean, who's left they can stand all night in the rain for?" Bieber is 19 years old, the same age as Elvis when he became famous. But the world is so different now than it was in 1956 that the comparison between Bieber and Elvis doesn't withstand the slightest scrutiny. However, I thought of Lester Bangs' words when looking at the huddled cold fans sleeping on the sidewalk waiting for tickets to be on sale. Spending time in Bieber's presence in the interview sections of the film do not give me confidence that he has the strength or intellectual capacity to withstand the onslaught of fame at the level he has achieved, but time will tell about that. The Bieber fans aren't going anywhere. And "Justin Bieber's Believe" is best when it shows us why. 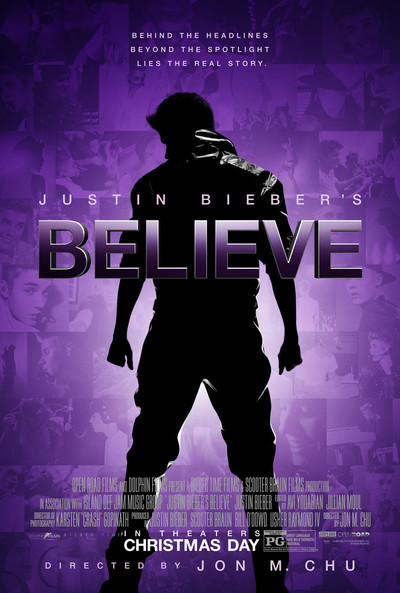 Justin Bieber as Himself

Scooter Braun as Himself

Ryan Good as Himself

Pattie Mallette as Herself

Jeremy Bieber as Himself

Mike Posner as Himself