“Just Cause" starts out strong and then, boy, does it jump the rails.

It's the kind of movie where you look at the screen and start imagining the push-pins holding the 3-by-5 cards to the cork board in a Hollywood office, as the filmmakers try to keep the plot straight.

When the movie's over, you realize that the first hour only seemed convincing: The whole movie is made out of thin air.

As the movie opens, a Harvard law professor named Armstrong (Sean Connery) is attacking capital punishment in a campus debate.

Then an elderly black woman (Ruby Dee) hands him a letter from her son, who is on Death Row in Florida for a murder he says he didn't commit. Armstrong tries to hand the letter back, but she looks him fiercely in the eye and says, "No, no, you keep it. It's got your name on it." This is the best scene in the movie.

Armstrong goes home, where his wife, Laurie (Kate Capshaw), is masterminding a party for their young kids. She reads the letter.

Then she encourages him to take the case, even though he hasn't practiced law in 25 years: "Every once in a while, you gotta get a little bloody. It's good for the soul." This seems curious. Not many mothers of small children encourage the other half of a May-December marriage to take complicated pro-bono cases on Florida Death Rows.

Later, her words make sense - or at least they are explained.

Armstrong flies south to meet Bobby Earl, the prisoner (Blair Underwood), and we get flashbacks showing how Bobby was arrested on suspicion of the kidnapping, rape and murder of a little girl. In a harrowing scene, a local black cop named Tanny Brown (Laurence Fishburne) beats a confession out of him, at one point clicking a pistol in Bobby's mouth in a version of Russian roulette. Armstrong's investigation shows that Bobby Earl was railroaded, that the forensic evidence doesn't hold up and that he got a pathetic defense from a local attorney (Ned Beatty), who whines: "I lost half of my business defending that SOB - and he got the chair! Can you imagine what it would have been like if he'd been acquitted?" By now we feel we're on pretty sound ground. We are not, although I must be cautious not to give away plot details, since this movie is, finally, all plot. There are a couple of good clues early on that everything is not as it appears. For example, the movie illustrates the Law of Conservation of Star Power, which teaches, "In a thriller, a star who receives second billing to the hero, and whose role seems clear at the end of the first hour, will be revealed as the opposite of what he seems." The movie also makes good use of the Tangled Web Syndrome, which is found in thrillers where all of the events of today are revealed to have their roots in long-ago events.

But enough. Most people will want to see this movie because of the presence of Sean Connery in the leading role, and on that score, if on no other, they will get their money's worth. When it comes to expressing quiet wrath, Connery is an actor like few others, and here, where he is a mild-mannered law professor and family man, he keeps his action side well concealed until an absurd climax that has him all but wrestling alligators. I especially enjoyed the scenes where he moseys through a hostile Southern town, keeping his cool while the local crackers insult him, and always remembering to thank them "for your time." If his role is the strong center of the film, none of the other actors have an easy time of it. That's because the corkscrews of the plot prevent them from being consistent from beginning to end.

Reflect, after you see the film, about how hard it must have been for a couple of the actors to describe 180-degree turns in their motivations. The movie depends on an audience with a short attention span, since if we remember some of the events of the first 30 minutes clearly, we will be asking tricky questions long after the movie is over.

My basic complaint with "Just Cause" is that it's simply an exercise in plot manipulation. Take out the violence and perversion, take out the nasty serial killer in the next cell (played by Ed Harris with Hannibal Lecter's lighting and camera angles), take out the police brutality and the victimized children, and what you're left with is pure Agatha Christie. There is no psychological depth, no real motivation, no human values to weigh, just characters jerked here and there like puppets in an arbitrary plot. I was serious about those 3-by-5 cards. They're what writers and directors use to keep everything straight in a movie like this. The audience could use some, too. 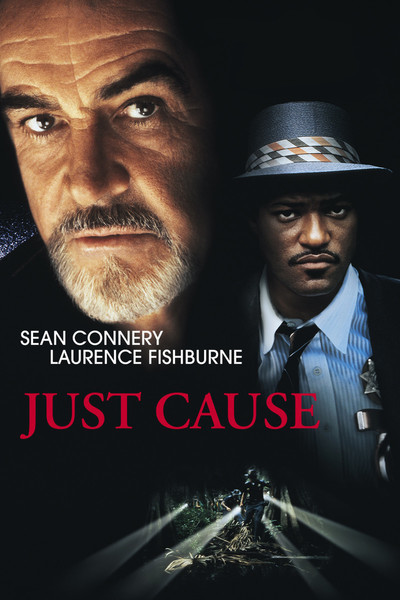 Ruby Dee as His Mother