The comedian Pauly Shore and I would find ourselves in agreement on one thing: The characters he plays are obnoxious. We part company, alas, on whether they are funny. I say they are not.

And after "Encino Man," "Son-In-Law" and now "Jury Duty," I am pretty much at the end of my curiosity about further experiments.

"Jury Duty" is another entry in the national Dumbing It Down sweepstakes, giving us a character who likes jury duty because, hey, when you're sequestered, the room and board are free. After Jim Carrey in "Ace Ventura: Pet Detective" and "Dumb and Dumber," after Adam Sandler in "Billy Madison," after Chris Farley in "Tommy Boy," here is another character whose appeal rests on rudeness, stupidity and the ability to make loud bathroom noises.

In this business one becomes a connoisseur. I can now see that Carrey is a virtuoso, Farley is at least hard-working, Sandler is hopeless and Pauly Shore bypasses all categories to achieve a kind of transcendent fingernails-on-the-blackboard effect. His appeal must be limited to people whose self-esteem and social skills are so damaged that they find humor, or at least relief, in at last encountering a movie character less successful than themselves.

The movie's plot shows us Shore as an unemployed layabout whose mother (Shelley Winters) coddles him. She's glad he didn't get a job as a milkman, because she hears the job is dangerous. His macho father (Charles Napier) takes another tack, announcing that the free lunch is over until Pauly gets a job. That's why the summons to jury duty is so welcome: Hey, it's food and shelter.

Shore's purpose in life becomes simple: He needs to prolong the murder trial of the "Drive-Thru Killer" as long as possible. His strategy seems curious, since (as all students of the Simpson trial know by now) almost everything he does in the movie would get him thrown off every jury in the country. No matter. He is obnoxious to his fellow jurors, makes unwanted advances on a beautiful jury member (Tia Carrera), and muscles into the judge's sidebar conferences.

The screenplay, by Neil Tolkin, Barbara Williams and Samantha Adams, has some good lines, of which my favorite is, "Oh, to be young and on Death Row!" There are also many uses of anatomical terms, the usual toilet jokes, and ridicule of tabloid TV types who are, and I quote, "bottom-feeders who suckle on the juice of human tragedy." I'm not sure the makers of this film should include themselves out. 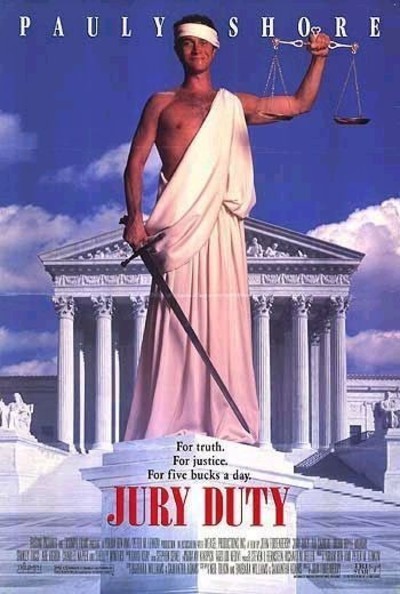