Jacques Rivette’s 1994, two-part film on Joan of Arc is absolutely one of the director’s masterpieces. It was such when it first played in the U.S. decades ago, when it was shown in a version that excised almost an hour and a half from its total five-and-a-half hour running time. The movie, now in a restored and untruncated version, is having a U.S. debut this week in New York and will be available on home video in short order. It’s essential cinema.

Why? Firstly, at least as far as its immediate accessibility is concerned, it contains one of the great performances by Sandrine Bonnaire as the French warrior-saint. This film exists in an entirely different context than Robert Bresson’s “The Trial of Joan of Arc,” which made a cinema icon out of Florence Delay. In the Bresson picture Joan is circumscribed as falsely accused, tormented. Rivette’s film puts Joan in a variety of situations. She’s a pious teenage girl, she’s a determined persuader/politician, she’s an inspired leader whose mere presence compels men who mocked her before meeting her to immediately acknowledge her saintliness. Bonnaire inhabits all of these modes with breathtaking immediacy.

Rivette was a critic before he was a filmmaker, and others have observed that this film shows its consciousness of prior major films about Joan — by Dreyer, by Preminger, by Bresson — by minimizing repetition of the events depicted in those. The two parts “The Battles” and “The Prisons” concentrate not only on events not treated by other films, but on the spaces between the most famous events of Joan’s life. Rivette applies a cinematic style that’s both impassioned and elegantly simple and rational to Joan’s inner and outer life, using long takes and brilliantly considered camera movements throughout.

While my experience of the truncated version was still a profound one, finally seeing the uncut version made me a little angry. In the shortened version, some of the excisions were, if not excusable, at least coherent. Lifting one entire abortive attempted journey to find the Dauphin makes some sense. Cutting off Joan’s dictation of her famous Holy Week letter to the King of England, on the other hand, now seems inexcusable.

The director’s cut also features a device entirely removed from the prior version. Here, supporting characters directly address the camera to fill gaps in the narrative of explain their relationship to Joan and their motivations for helping her. This takes the film out of the realm of the pure period piece, to be sure.

Yet Rivette’s execution of this device is so credible that the effect is less postmodern than it is magical realist — you will believe there were film cameras in the fifteenth century. 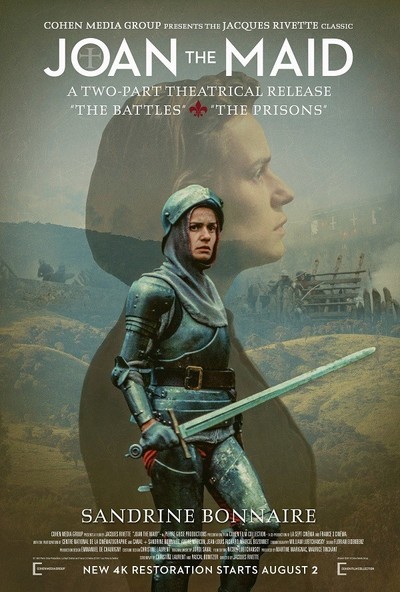