The stalwart English-born director Ken Loach has stated that this picture, set in Ireland in the 1930s (for the most part), will be his final fiction feature. Loach’s matter-of-factness as both a person and an artist is reflected in the reality that, for better or worse, there’s nothing about “Jimmy’s Hall” that suggests a swan song or a grand summation. It’s just another solid Loach film, an affectionate realist portrait of individuals fighting against state and religious oppression. In this case the setting, as it was for his 2006 Cannes Film Festival Palme d’Or winner “The Wind That Shakes The Barley,” is Ireland.

The opening credits, however, show 1920s newsreel footage of New York City, and is accompanied by the warm scruffy sound of American jazz on 78 rpm records. The post-credits cut to a particularly beautiful Irish landscape—a narrow winding road between a grassy ridge and a similarly green but suppler hill—is a bit of a shock. All becomes clear soon. The movie’s protagonist, Jimmy Gralton—the  Jimmy of the title, played with quiet charisma and conviction by Barry Ward—is back in his home in Ireland’s County Leitrim after a ten-year exile, and while away he’s been working in New York, and soaking up the culture. That culture is some of what he imparts to the community when he’s inspired to reopen a meeting hall he helped create ten years before.

As it happens, it was that hall, called Pearse-Connolly Hall, opened during the Irish Civil War, which played a part in Jimmy’s self-imposed exile. And now that he’s back in a cozy cottage with his mum (who, we learn, was a self-starting educator herself back in the day), he’s a local legend to the kids, who, starved for both entertainment and enlightenment, beg him to reopen the hall. The main entreater happens to be Marie O’Keefe (Aisling Franciosi) the teenage daughter of  one of Jimmy’s oldest enemies, an army commander played by Brian F. O’Byrne.

“Does it break your heart or does it fill you with hope?” So asks one of the film’s characters, discussing Yeats’ “The Song Of Wandering Aengus,” at one of the hall’s casual reading groups. The conclusion is that it does both, and that can be said about a great deal of Loach’s own cinematic output, particularly his 1969 masterpiece “Kes,” a movie about childhood that’s right up there with Truffaut’s “The 400 Blows” for honesty and empathy and sadness. Written by Paul Laverty, “Jimmy’s Hall” has a more sedate tone overall, even as Gralton and his companions face all manner of opposition from powerful forces, beginning with Father Sheridan (Jim Norton—not the comedian, for heaven’s sake, but the Dublin-born character actor) a shrewd cleric who tries to shame his parishioners out of attending any events at the hall, decrying the jazz bands that play the dances there on predictable lewd-and-licentious grounds. Sheridan’s one of the most interesting characters in the film: a very bright man who sees Gralton as a threat to his institution on a very particular level, a person who may well be relatively tolerant in his own mind but understands that his power does not reside in tolerance.

In a reflection of what Robert Christgau has called “the tragicomedy of leftist sectarianism,” certain politically minded commentators have noted that this based-on-true-events film soft-sells the fact that the real Jimmy Gralton was, besides being a community organizer, an unapologetic Stalinist. Oh well. This movie, as it happens, smooths out quite a bit of material in order to make its story points and moods conform to that of a relatively conventional Inspiring Narrative. Jimmy is given a lost-then-refound love whom his innate sense of nobility inhibits him from reclaiming, for example. The conventionality, in fact, every now and then flirts with the trite, and the movie is bereft of the rough edges and surprises that were still evident in “Barley.” On the other hand, the proceedings are conducted with both intelligence and compassion prominently placed, and the acting all around, particularly from Norton, is first-rate. So while it may not represent entirely accurate history, it depicts a set of values and actions the filmmaker clearly holds dear, and does so with commendable engagement. Enough that a viewer might wish for Loach to change his mind with respect to his semi-retirement. 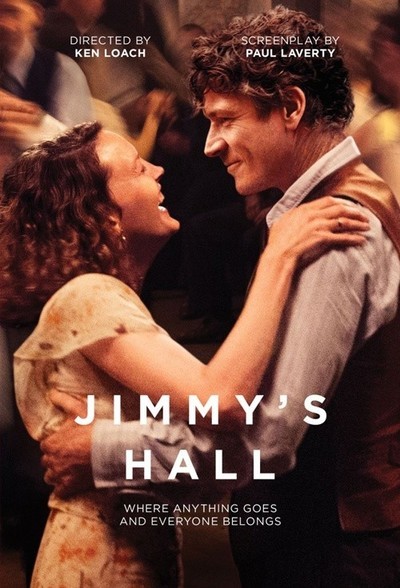 Rated PG-13 for language and a scene of violence