Jim & Andy: The Great Beyond

There were rumors for years about Jim Carrey’s behavior on the set of Milos Forman’s “Man on the Moon”—stories that he never broke character, either as Andy Kaufman or his alter ego Tony Clifton. Twenty years after the production of that film, Chris Smith (“American Movie”) has directed a very unique behind-the-scenes study that doesn’t just offer insight into the making of that film, but the entire careers and almost parallel personalities of Carrey and Kaufman.

Rather than produce a standard press kit for "Man on the Moon," Carrey asked Kaufman’s girlfriend Lynne Margulies and collaborator Bob Zmuda to handle filming him in his trailer and on set as Kaufman/Clifton. Reportedly, Universal then demanded that the footage be buried because they were worried Carrey would “come off as an asshole.” They had reason to be concerned. Or did they? It will vary as to exactly when, but there will likely come a moment for each of you when you question exactly how much of “Jim and Andy” is 100% accurate. Did Carrey stay in character constantly, or just in these bits, filmed by Andy’s ex and writing partner? The blurring of that line between performer, reality, and fiction adds another layer to “Jim and Andy” that Kaufman would have adored. And Carrey likely does too.

Adding to the suspicious nature of “Jim and Andy” is the fact that Carrey is the only interview subject in the film (meaning we don’t hear collaborating stories about his on-set behavior from Forman, Paul Giamatti, Danny Devito, etc.) Carrey is a forthcoming, interesting interview subject, surprisingly willing to share his own history and demons. The on-set footage of Carrey/Kaufman and Carrey/Clifton berating people is only interesting for so long, and actually gets a little tiring before the film is half over, but Carrey the interview subject keeps the film going.

The career parallels are relatively obvious. Both Carrey and Kaufman broke down comedy standards and expectations. Carrey speaks about going on stage and just making sounds to see what people respond to, and we see footage of a startling appearance on “The Arsenio Hall Show” that I had forgotten if I ever saw it. He speaks of his own personal Mr. Hyde coming out on stage, taking over for Jim, and that’s a loss of control that Kaufman seemed to like in comedy as well. There are also some emotional memories of his father, a man who taught him a lesson about going for success by failing in a way. Carrey is open and brought to tears a few times. The genius of Andy Kaufman has been well-reported (and clear in Forman’s film) but this movie works as a testament to the ability of Carrey more than the man he played. Whatever you may think of his acting chops or comedic skill, the man gives his all to his work, something that he expresses as something almost out of his control—the films, the roles, the characters come to him through something akin to destiny. Again, this could all be bullshit. Or it could be pure and true. I think Kaufman would have liked that we’ll never really know.

Ultimately, “Jim and Andy” works best as a reminder of the skill level and commitment of its two title performers. There’s some footage of “Eternal Sunshine of the Spotless Mind” and “The Truman Show” that really reminded me how much I love those movies (and made me want to watch them again). And there’s no denying Kaufman’s fearlessness, which is what it feels like Carrey wanted to channel most of all in his “Man on the Moon” performance. What’s more fearless than never leaving character and demanding people refer to you as Andy or Tony? The only problem with “Jim and Andy” is that you’ll get most of this in about half of the film’s running time. It doesn’t quite justify a feature, and would have worked phenomenally as a tighter doc short. Of course, Tony Clifton never would have allowed a film about him to be anything less than feature length. 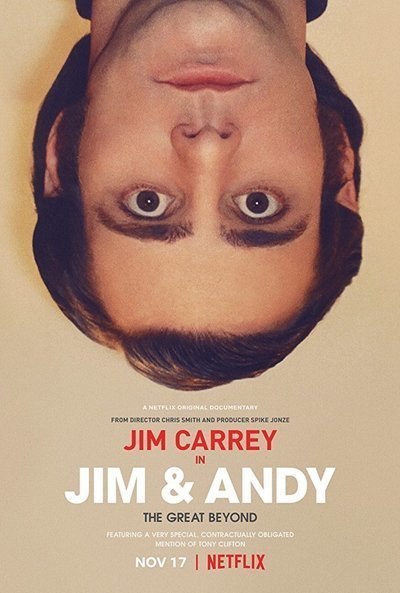