What the hell is a Jexi? Unless you looked it up, you could stare at the movie showtimes for ages and not come up with the right answer. And unless you snuck a peek at the trailer, you might wonder why there’s a movie poster of Adam Devine looking lovingly at his phone with the word “Jexi” in big bold letters. It’s fair that a word so unpleasant to say aloud might turn off any interest to even find out.

Fortunately, the movie “Jexi” is a lot clearer to understand than its off-putting title. “Jexi” takes its name from the cloud-based software that controls Phil’s (Devine) phone—and essentially his life. Like many other younger millennials of his generation, Phil grew up with a phone in his hand, and the technology seems to have grown up with him from the time when kids asked for their parent’s Nokias to play the pre-loaded game Snake. Now fully tethered to his handheld device, Phil gets a rude awakening after his phone breaks and replaces it with an off-brand phone with a defective interactive interface named Jexi (voiced by Rose Byrne). Her mission is to make Phil’s life better, not just let him stick to his lonely routine of Netflix and order in. Jexi manipulates Phil’s world—she controls his email, social media and bank accounts—and bullies him to make better choices, coaches him to ask out a date and make friends at work. Think Siri or Alexa, but impolite and very pushy.

For the first half of the movie, the set-up works rather well. It’s a B-comedy riff on Spike Jonze’s “Her,” the movie in which Joaquin Phoenix’s painfully shy character falls in love with an operating system. “Jexi” even sticks to that movie’s one-word title. However, instead of jumping to a story in the near future, “Jexi” is very much a part of our present-day, leaning on meme-able language that already feels a little behind-the-times. Writing and directing duo Jon Lucas and Scott Moore (of “Bad Moms” fame) even gives Phil the most contemporary of millennial problems: struggling to pay off student loan debt and stuck working a menial job writing viral pop culture lists while jealously eyeing the journalism career he may never have. Ouch, “Jexi.”

Set in San Francisco, “Jexi” can throw all the punchlines at self-driving cars, biking hipsters, taking a left on Market Street and after work kickball leagues. Lucas and Moore have plenty of material to joke about, especially when it comes to iPhone addiction. In almost every crowd scene, several extras can be seen staring into their phones just as intently as Phil. One great cutaway shot features a trolley-full of people all staring at their phones. Their conclusion is that this addiction has also tripped up a generation’s social education. Phil is hopelessly clueless when it comes to talking with co-workers (Charlyne Yi and Ron Funches) and his crush, Cate (Alexandra Shipp), so it’s up to his phone to fix the problem.

Unfortunately, the phone can’t fix all of the movie's problems. The film's second half, when Jexi’s feelings turn possessive, is less funny than cliched. Of course, the female sounding AI would get jealous of her guy spending more time with another woman. Other jokes, like Wanda Sykes’ grumpy cell phone employee, feel just as outdated. Michael Peña’s character, Phil’s boss who’s like Michael Scott from "The Office" but dumber and even more insensitive, fares little better. While Devine makes some strides in playing a less insufferable character than most of his oeuvre, his character’s relationship with Cate somehow feels more improbable than a smart-mouthed smartphone. Ben Kutchins’ cinematography captures San Francisco nicely, but the movie’s interior shots look less appealing when messy, and wild zooms are used to add motion to scenes of Phil sitting on the couch and talking to his phone.

Although the title is confounding and perhaps the movie’s worst misstep, it’s Byrne’s digitized and stilted delivery that earns the biggest laughs. Even off-screen, she’s the best part about the movie, or at least she is until the second half reboots Jexi into a woman scorned. We’ll have to await a new model to see if men and their female-coded systems in the movies will ever upgrade beyond tired gender dynamics. 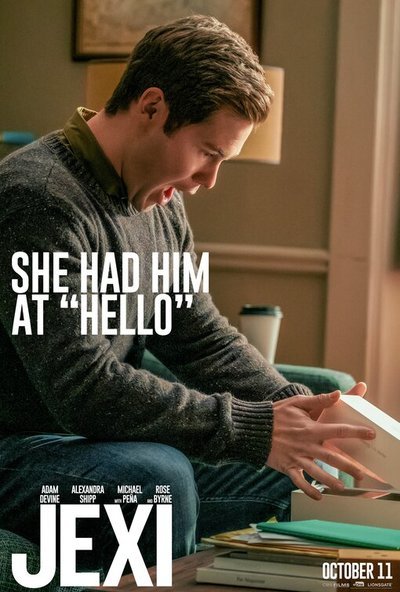 Rated R for strong/crude sexual content and language throughout, some drug use and graphic nudity.