"Jauja," a period drama set in Argentina's Patagonia region starring Viggo Mortensen, is one the most original and peculiar adventure films in recent memory; it's firmly in the wheelhouse of Argentinian director Lisandro Alonso's previous films ("Los Muertos," "Liverpool"), and your your affinity for it will depend mainly on your willingness to roll with its style, tone and pace. You'll describe it as "patient" or "deliberate" if you like it, "slow" if you don't, "gorgeous" if it pleases you, "pretentious" or some-such otherwise. In any case, it's a rare film one can describe as a series of paintings come to life. Shot on 35mm film in 4x3 aspect ratio (the shape of old movies, complete with rounded frame-edges), it allows Alonso to further hone his style of picking a shot and sticking with it as long as he possibly can, while characters move slowly through the frame, or sit still and talk, or think, or be.

There is a story: Danish Captain Gunnar Dinesen (Mortensen) leads a band of men assigned to kill Aboriginals living in the country's desert. During his sojourn there, his daughter, Ingeborg (Viilbjørk Malling Agger), who is stationed with him, runs off with a young soldier named Corto (Misael Saavedra), causing Dinesen to take off in pursuit. This sounds like a variant of the Western wilderness-kidnap film, and the scenery certainly would seem ripe for that.

But Alonso and his cinematographer Timo Salminen aren't interested in traditional beats. As the story moves us from calm to violence and back to calm again at the end, the storytelling, indeed the cutting from scene to scene (there are few scenes with more than one shot), thwarts any expectations we carried into the film, not just in terms of story, but rhythm. You never know how long a shot will last or what it'll emphasize.

The movie opens with a static image of two characters sitting on a rock for several minutes, and continues that way even when the story allegedly kicks in and Dinesen rides off to find his daughter. A shocking act of violence is revealed as aftermath, and you don't even see the moment of discovery in closeup. A conversation between Dinesen and a hateful underling who describes the aboriginals as "coconut-heads" and blithely argues for their extermination is chilling not just because of the content of the conversation, but because of the way Alonso lets Dinesen exit the frame while staying on the underling for a long moment, letting us observe his utter disgust at a man who thinks less of him because he's a white supremacist.

As in films by Werner Herzog, Terrence Malick and Theo Angelopoulos, the filmmaking encourages us to think less about what motivates the characters (their drives are often hazy) than their existence within the context of a land and an era that is ultimately indifferent to their dramas. The slow (or "deliberate") pace makes the mind wander away from the absence of expected values and focus instead on the presence of ones you don't normally get from scripted features. You may find yourself noticing a soldier's blazing red trousers against the green lichens and thinking about how inappropriate, and somehow strangely arrogant, they are, and how this juxtaposition of colors seems to summarize the mentality of those who would try to invade and subjugate terrain they barely understand.

The performances are entirely without vanity, including that of Mortensen, an international star who fits right into the period and seems unencumbered by contemporary neuroses (though the character has plenty from that era). The actor was born in New York City, spent his early childhood in Denmark but was raised in Argentina and speaks fluent Spanish; he would seem like a perfect fit for this extremely specific role even if he didn't have such extraordinary yet unaffected control over his face and body, always suggesting Dinesen's emotional interior but never indicating.

The performances mesh beautifully with the filmmaking, which is more keenly attuned to fluctuations in the natural world that all but a handful of modern motion pictures. The wind, the chirping birds, the gently lapping waves all center the mind, and this both amplifies the film's physical beauty and makes the increasingly shocking events seem eerier, more dreamlike. A title card informs us that Jauja is a fabled "earthly paradise" that many sought, and that they all "got lost along the way." The getting lost part is key to the experience. The whole film feels purposefully unmoored. That might sound like an oxymoron if you haven't seen it, after which point it feels more like a reason for being. The final few shots assert the supremacy of nature and time over human concerns. Their spareness is haiku-like. 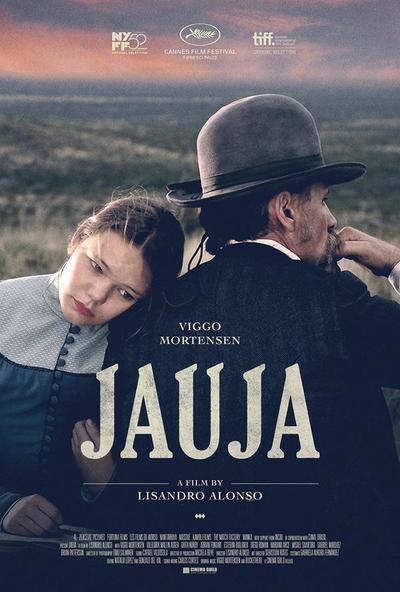