These days, there are a fair amount of films and TV shows that depict the difficulties of people who cope with the sometimes isolating aspects of autism, especially when it comes to romantic relationships. “Rain Man” might have started the trickle of such often hyper-smart yet socially challenged characters into mainstream entertainment, but sitcoms such as “The Big Bang Theory” (whose star Jim Parsons supports fan theories that his Sheldon has Asperger’s, a form of autism) and “Silicon Valley” (cast member T.J. Miller has described it as an “Asperger’s ‘Entourage’ “) as well as movies including “The Girl With the Dragon Tattoo” and “The Social Network” have carried on the trend with some regularity.

Into the fray arrives “Jane Wants a Boyfriend,” a sweetly-intentioned though somewhat awkwardly structured spin on a Hallmark Channel-style dramedy that strives to shed light on the disorder from a female perspective. It is clearly filled with good intentions, with a script inspired by real-life events and a reliance on rehearsals for a theatrical production of “A Midsummer Night’s Dream” to add thematic texture.

Producer Kerry Magro, who has autism, was called upon to ensure there would be an honest portrayal of Jane as she struggles with matters of the heart. Happily, Louisa Krause (who had supporting roles in “Young Adult” and “Martha Marcy May Marlene”) strikes a satisfying balance as Jane by being both winsomely free-spirited and wildly creative but also prone to explosive meltdowns and an inability to focus on detailed tasks while under pressure. Whether she is naughtily downing a margarita for the first time or miming the dialogue to the cult ‘50s crime-noir “Kansas City Confidential” (everything she knows about love, we are told, comes from old movies), Krause—who is reminiscent of a young Catherine O’Hara—is a pleasure to observe even during Jane’s more difficult moments.

Alas, any stereotyping to be had is found on the other side of this tale of two sisters. As Bianca, a waitress turned legit actress after landing the plum role of Titania—the Bard’s queen of the fairies who is besotted with donkey-headed Bottom (played by “Jane” screenwriter Jarret Kerr)—Eliza Dushku can’t help but initially command our attention. After all, this breakout alum of the Joss Whedon academy of cult TV hits (“Buffy the Vampire Slayer,” “Angel” and “Dollhouse”) is not only as striking as ever, but also is one of the few recognizable faces onscreen.

But her Bianca quickly becomes more of a cardboard convenience than a fleshed-out human on many levels. For one, she and future husband Rob (Amir Arison) can somehow afford to move into rather spacious digs (her closet alone could almost pass as a studio rental) in a Manhattan-adjacent location. It only gets worse when we learn they are serving a $100 bottle of wine at Bianca’s farewell-to-waitressing party. Rob also is lucky enough to be the rare journalist to get a promotion instead of an email announcing another round of layoffs. As for the running bit about Bianca’s need to sneak off to smoke cigarettes, it goes stale pretty fast as did my interest in these characters.

On top of that, Bianca is the very textbook definition of a control freak. Her uptight nature not only affects her onstage performance but also alienates her from Jane as she refuses to treat her sister as an adult and allow her to make her own decisions. That their flighty mom (Polly Draper of “thirtysomething” fame) thinks nothing of using the occasion of Jane’s 25th birthday to deliver the news that she and their father are moving to rural New Jersey, and that they expect Jane to move in with Bianca, only complicates matters.

Yes, Bianca was kind enough to get Jane an internship as a costuming assistant for the play, but she and Rob go a step too far when Jack (Gabriel Ebert), the somewhat emotionally stunted sous chef from her restaurant who is yearning for commitment himself, becomes attracted to Jane without suspecting she is autistic. He just knows that she is a refreshing upgrade from the hard-partying college girls he has been dating and thinks she is “pretty cool.” When Bianca realizes what is happening, she tells Jack to back off while Rob initially refuses to give him Jane’s number, with the decidedly non-PC warning that she’s “retarded.”

At this point, there is more to worry about Bianca and Rob’s wrongheaded attempts at protecting Jane than anything else. Besides, as her suitor, Ebert (a Tony-winner for his work in “Matilda the Musical”) does a fine job of evolving from potential jerk to perfect match in just a few scenes while believably bringing out the best in Krause’s Jane. As Shakespeare wrote, “The course of true love never did run true,” especially when the would-be top chef launches into an extended first-date metaphor involving recipes for “elusive soups.”

But soon enough, the course of true love runs very true. Predictably, yes, but pleasantly enough, as Jane gets what she wants—and deserves. 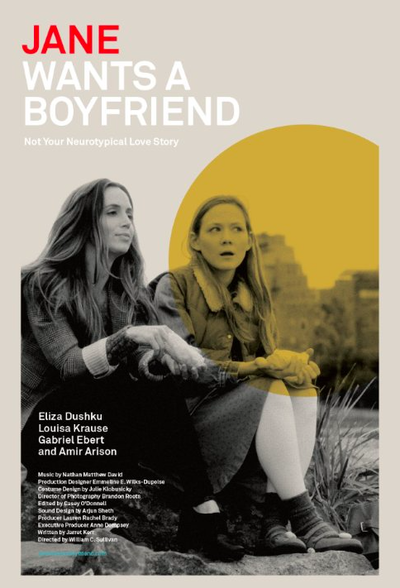