In the summer of 1995, you couldn’t go anywhere without hearing a song from Alanis Morissette’s breakthrough album, Jagged Little Pill. It was a hit factory, a source of non-stop radio fodder. From the cathartic and rage-filled debut single “You Oughta Know” to the upbeat and hopeful “Hand in My Pocket” to the catchy and shoutable “Ironic”—which may or may not depict a series of situations that actually are ironic—Morissette’s music defined an era.

Director Alison Klayman’s documentary “Jagged” captures the singer-songwriter’s stratospheric rise from Canadian pop and TV star to Grammy-winning global phenomenon. Her approach is entertaining and well-paced, yet frustratingly conventional and safe. With her brunette waves and baggy T-shirts, this is an artist who knew who she was and took real chances with her lyrics. She put herself out there, telling stories that were specific and vivid, deeply personal and raw, yet relatable to so many fans—especially to other young women who wanted to make their own voices heard. “The scarier it is, the more I know that I’ve hit paydirt,” Morissette says, sitting cross-legged and barefoot in a black leather chair before a wall of books in her home library. Klayman recognizes the distinctive power of her subject’s songwriting and often includes her words on screen while wisely letting long sections of her songs play out. But the structure of her film is a rather standard compilation of archival photos and footage from Morissette’s childhood in Ottawa, intimate backstage glimpses, concert clips, talking-head interviews with key players and cultural critics, and candid conversations with Morissette herself.

That last part is crucial, as well as a source of confusion. Now 47 and a married mother of three, Morissette is still as charismatic and quick-witted as ever. She still has the same accessibility and self-deprecating humor that allow her to connect instantly with her audience. She’s the one taking us on a tour of her own story. And with the exception of a couple of brief detours in darker directions, “Jagged” is singularly celebratory. As in recent documentaries about Michelle Obama, Taylor Swift, Billie Eilish, J. Balvin, the late John Lewis and many others, the access to these major cultural figures translates into films that are so positive, they border on infomercials. “Jagged” isn’t quite so fawning, but it features only voices of praise.

Which is why it’s so perplexing that Morissette has denounced “Jagged,” releasing a statement before its Toronto International Film Festival world premiere in September that she wouldn’t promote or support the film. What we're seeing is not the story she agreed to tell, she said, calling it reductive and saying it contains some falsehoods (although she hasn’t specified what those might have been). “I sit here now experiencing the full impact of having trusted someone who did not warrant being trusted,” she said of Klayman, whose previous work includes the documentaries “Ai Weiwei: Never Sorry” and “The Brink” about former Trump strategist Steve Bannon. She says Klayman interviewed her during a vulnerable time, and that she had a salacious agenda.

Seeing the finished product, though, it seems Klayman’s agenda was to remind us of what a thrilling, groundbreaking album Jagged Little Pill was a quarter century ago, and to inform us that Morissette remains a badass to this day.

We see the artist’s beginnings as a perky ‘80s pop star, complete with crimped hair and acid-washed jeans, writing her own songs and winning talent competitions at just 10 years old. Gen X kids get to revisit her role as part of that after-school sketch-comedy staple, “You Can’t Do That On Television.” But recording, touring, and shooting music videos with little supervision at age 15 placed her in several unsafe situations with predatory, older men in the industry, and Morissette recalls the statutory rape she now recognizes she suffered. “I’m gonna need some help because I never talk about this shit,” she confesses in a rare uncomfortable moment. Perhaps this is the content she’s objecting to in retrospect. No one from her family appears in the film, aside from long-ago snippets.

But the bulk of the documentary consists of Morissette, Jagged Little Pill co-writer and producer Glen Ballard and the bandmates she toured with talking about the whirlwind surrounding the album’s recording and release. Guy Oseary, the former executive at Madonna’s label Maverick Records, says he knew instantly how major Jagged Little Pill would be, shepherding it to the influential Los Angeles radio station KROQ, which launched it into ubiquity alongside MTV. Amusing anecdotes come from the likes of Taylor Hawkins, who was Morissette’s drummer on her 18-month global tour before joining the Foo Fighters. (Jane’s Addiction bassist Chris Chaney also was a part of that early crew.) Garbage lead singer Shirley Manson lends credibility in discussing how important Morissette’s music was for all female artists at the time. And naturally, Kevin Smith has kind things to say about Morissette—after all, he cast her as God in his 1999 comedy “Dogma.”

Jagged Little Pill has sold more than 33 million copies worldwide, making it the second best-selling album ever by a female artist. (No. 1 is Come on Over by fellow Canadian Shania Twain, in case you’re wondering.) It was nominated for nine Grammy Awards and won five, including album of the year, when Morissette was just 21 years old. Radiohead opened for her—that’s how huge she was. “Jagged” rides the wave of that excitement, but avoids opportunities to explore deeper below the surface. 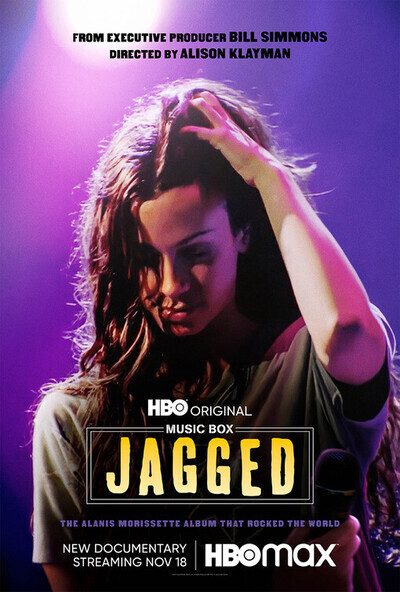 Alanis Morissette as Self