When Abbie, who thinks she is pregnant due to the bloating in her belly, instead gets a diagnosis of Stage 4 cancer, her reaction is stunned shock, followed by a quip to her fiance, "At least we won't have to pay for college." He replies, "Unless it's a really smart tumor." There's a pause and he murmurs, "Too soon." "Irreplaceable You," written by actress Bess Wohl and directed by Stephanie Laing, is filled with dialogue like that, self-conscious "quips" meant to be witty gallows' humor, an adorable spin on denial. Grief does not look a certain way (and the expectation it should does a lot of damage to those going through it), but the language here is off-putting, skipping off a too-beautiful and insistently color-corrected surface. The dialogue creates an arch and artificial mood, never sounding like real talk despite the clearly talented actors (Gugu Mbatha-Raw and Michiel Huisman) playing the roles. The film itself seems to be in denial about its own story.

The "adorable" quality starts early when it shows how Abbie and Sam met. They were eight years old on a field trip to an aquarium, and when the tour guide describes how the monogamous deep-sea angler fish bites its chosen mate, young Abbie leans over and bites Sam. They have been together ever since in an uninterrupted continuum of monogamous coupledom. Her cancer diagnosis is the first event to tarnish their eternal intimacy. Adding to the sense of unreality, the couple live in a gigantic sun-drenched loft in New York, which looks interior-decorated by a professional. Abbie doesn't know how to cook a chicken. They eat takeout. Why, then, do they have an industrial sized kitchen, the walls lined with professional-grade cookware? (The tendency to put New York film characters into completely unrealistic apartments is so common as to be mundane, and when a film accepts the space challenges most New Yorkers live with—even New Yorkers with good jobs—it's such a welcome breath of reality.) "Irreplaceable You" gives cancer the most glamorous backdrop possible.

Abbie's reaction to her diagnosis is to search for a new mate for Sam, someone who can take care of him when she's gone, who can make sure he doesn't wear mismatched socks. She creates an online profile for him and interviews potential candidates. She never seems sick, despite the seriousness of her diagnosis. She throws up from her treatment once. She's not exhausted or in pain. Nothing changes in her physically. Maybe it’s unreasonable to be annoyed by this, but if you’ve experienced the death of a loved one from cancer, you know how bad it can get, how extreme the challenges can be. In “Irreplaceable You”, cancer is used mostly as a plot point to get the story started. Abbie’s cancer diagnosis is implicit as opposed to explicit, and there is no sense over the course of the film—with one or two exceptions—that the cancer is having any effect on her at all. This is a huge missed opportunity.

The cancer support group Abbie attends is filled with characters played by heavy-hitting actors, many of whom far surpass both Abbie and Sam in interest. These scenes generate real sparks. There's Steve Coogan, as the group leader, who insists the crocheting he makes them do is "not a metaphor." Kate McKinnon plays a woman in such denial about her diagnosis she insists, with bright manic eyes, that she's "blessed.” Her positive attitude drives everyone crazy. She vibrates with a tragic intensity missing from the rest of the film. Christopher Walken plays Myron, a man with a terminal diagnosis, who befriends Abbie. They spend time together. Their friendship is a huge aspect of the film. Myron is mainly there to be a sounding board for Abbie's "project" to marry Sam off. He thinks she's insane and tells her she is displaying signs of "anticipatory grief," an insightful comment.

There are some good scenes between Abbie and her mother (the wonderful Tamara Tunie), where Abbie pushes her mother away, resenting the worried interference. There are some good scenes between Myron and Abbie, especially when Myron opens up about his own marriage. Walken's line readings are so his own the language takes wing for the first time. "Ugly. Purple. Couch," he says. "My wife put it in the living room and I was angry for two years." He brings with him the world-weary gravitas of a man who has seen it all, who still enjoys the simple things, who will miss his wife (Jacki Weaver), will even miss the ugly. purple. couch.

In an episode of the television series "thirtysomething," during the arc where Nancy (Patricia Wettig) develops cancer, Nancy spends more time with a new friend from her support group than she does with her family. This causes extreme tension with her husband who wants to soak up as much time with her as possible. But the people in Nancy's support group are the only ones who understand—and are not afraid of—what she is going through. These kinds of in-depth, difficult explorations are beyond "Irreplaceable You"'s capabilities. There's real poignancy in Myron's character and in Kate McKinnon's character. Abbie's journey—from denial to acceptance—is important, but it's wrapped up in a package that wants to be charming, wants to be inspirational from the first frame with its posthumous voiceover and swelling music.

I'm being hard on the film. It is not without its charms. But "Irreplaceable You" pays a price for prioritizing charm. The emotional process of accepting death—for those suffering and for those who will be left behind—is exacerbated by changes in the body, the impossibility of pain management, the medical bills, the sense survivors have of their loved one moving far away, even before death, into a realm where no one else can follow, the tide going out slowly, excruciatingly. Even though "Irreplaceable You" tries to avoid this reality, it shows up anyway. It's there in Kate McKinnon's desperate gleam of gaiety, in Christopher Walken's exhausted acceptance, in Tamara Tunie's sadness hidden behind a chipper competent surface. These all feel like emissaries from the real world. Too bad the main narrative doesn't take place in the real world at all. 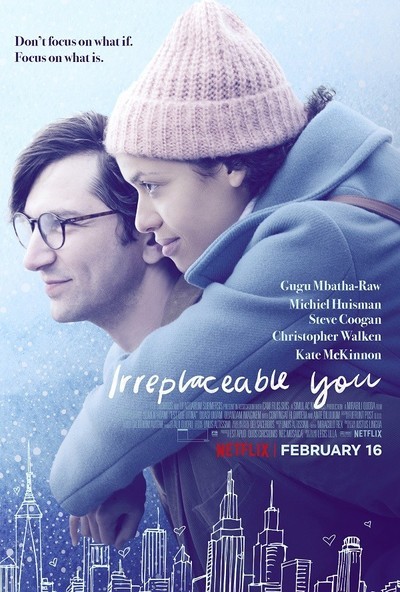