Invasion of the Bee Girls

"Invasion of the Bee Girls" is the best schlock soft-core science fiction movie since maybe "The Vengeance of She." It may, in fact, provide a clue to the most puzzling aspect of that 1968 epic. You will recall that Olinka Berova, who played She, was plagued by a strange buzzing in her ears. This was in fact the sound track calling her back to the trackless wastes of lost eons, although for a long time we didn't catch on. All we knew was that every time she heard the buzzing, Olinka started taking off her clothes. Members of the audience were even moved to float a few tentative buzzes themselves. Now comes a movie in which every time we hear the buzzing on the sound track a man drops dead of an acute coronary.

The doctor's diagnosis in each case is that the men seemed to be suffering from extreme sexual fatigue at the time of their deaths. I am not entirely sure how this diagnosis is made in an autopsy, but then perhaps I do not really want to know.

Anyway, the men are dropping dead around a high-security government plant, and so William Smith is dispatched to have a look into things. He plays a federal agent, which is a little startling if YOU are a B movie fan and the name William Smith means anything to you. He is the king of the motorcycle movies, known throughout the genre as Big Bill Smith. He always plays the leader of the other gang, a science he brought to an art in "Hells Angels on Wheels," not to mention "C. C. Rider," in which he took on Joe Namath armed only with a chain. Anyway, Big Bill doesn't get very far in his investigation until he stumbles onto an amazing hypothesis: The deaths are somehow linked to the sexual habits of the queen bee. I am not entirely clear how he figures this out, but there is a short documentary on bees in the movie to help us understand.

What's happened, you see, is that the beautiful female scientists at the secret plant have used radioactivity to change their cellular structure so that they are, indeed, queen bees. The queen bee's most compelling urge, of course, is to mate. Meantime, alas, the radioactivity has also made them sterile, but they don't know that and compulsively claim one victim after another.

What salvages this somewhat unlikely plot is the movie's sense of style. It looks good, it moves fairly well, the girls are pretty, Big Bill frowns impressively and there are a lot of near s-f gimmicks. My favorite was a sort of Redi-Whip cocoon that not only turns the girls into queen bees, but gives them a facial and a hairdo at the same time. 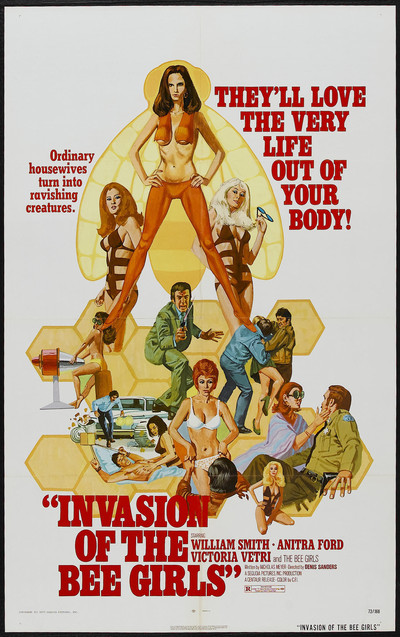