Into the Dark: My Valentine

“Into the Dark: My Valentine” starts with some of the most interesting themes in the history of this monthly Hulu/Blumhouse series of original horror movies. It’s a film about true toxic masculinity, the kind that sees women not only as possessions but interchangeable ones at that. You know the kind of guy whose girlfriends all seem vaguely the same because he manipulates, alters, and abuses them in the same way. It’s a strong place to start a horror movie, spotlighting the kind of monster who thinks anyone who doesn’t do what he says and gives him what he wants, especially women, are just “being mean to him.” Sadly, an idea is only part of the picture, and the execution of “My Valentine” varies from competent to truly frustrating. Adopting something of a pop princess aesthetic, but not even committing to that enough to make this visually exciting, “My Valentine” is a movie that’s constantly on the cusp of finding the right tone before veering off into another one.

Valentine (Britt Baron of “GLOW”) is a pop singer who returns to the stage for the first time in a long time, but it’s come with a flurry of controversy. She’s performing at a small club some of the songs that have been made popular by a pop star named Trezzure (Anna Lore), and her fans are furious that Valentine is taking someone else’s tunes. Valentine claims it’s the other way around—Val wrote these songs and Trezzure has stolen them, put in her place by her boyfriend/manager Royal (Benedict Samuel). Through flashbacks, it’s revealed that Royal dated Valentine before Trezzure. He stole the songs and replaced his pop princess girlfriend with a near-identical person, thinking no one would notice or believe Valentine. When Royal comes to the club with Trezzure to insist that Valentine disappear back into the shadows, it leads to inevitable violence.

Royal is an absolute monster, the kind of abusive manager/boyfriend who has made headlines recently in the pop world as young performers are claiming their work and identities more than ever. He’s an interesting character, but Levin and Samuel never quite find the right tone for him—oscillating wildly from cartoonish caricature to something more dangerously real. Similarly, Lore is caught playing a plot device as her character bounces from believing Valentine to standing by Royal as the film demands. Only Baron ekes out a memorable character, but even she is playing a sense of realism that the rest of the film doesn’t seem interested in exploring. With quick cuts, odd angles and split screens, there are times when “My Valentine” reminded me of Brian De Palma but with nowhere near the same understanding of sex and violence as that influence.

The plot allows writer/director Maggie Levin to shoot a few long music videos—the film even ends with an entire one to pad out the running time—and they look exactly like the rest of the movie, washed in blues and pinks of interior nightclub lights. Is there a statement to be made about how we’re all living in a pop music video? I don’t think so. I think someone just thought it looked cool. And a film about image obsession and how easy it can be to use pop princesses needs to drop the veneer at some point, otherwise it just rides along the surface of meaning, feeling about as thin as a mediocre music video. I kept waiting for “My Valentine” to really dig its nails in, up the stakes, connect emotionally or even viscerally, and was crestfallen when I realized that was simply never going to happen. This is the cinematic equivalent of a disposable pop tune that alludes to something serious but refuses to actually say anything real. And that’s coming from someone who genuinely likes pop music—I just want something different from it than I do from a horror movie. 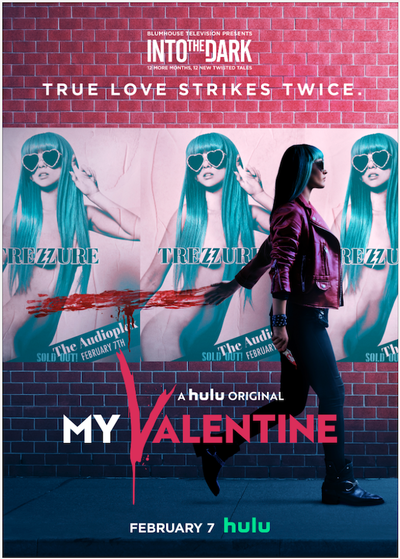