Don't go alone if you must see the tepid, but mostly adequate ghost story "Insidious: The Last Key." Really, don't even bother to see this third sequel in theaters unless you really, really want to. Yes, I too know the Siren call of a new horror film on opening night.

But really, whatever you do, don't watch "The Last Key" without the emotional support of a buddy who can confirm that you're not just imagining this: these movies are still getting incrementally better, a trend that began with "Insidious: Chapter 2." And "The Last Key" does feel like it's 70-minutes dripping wet (even if it's a shocking 103 minutes?). And the makers of "The Last Key" do pull enough punches that you'll actually wish the rest of the movie weren't as dependent on jump scares to establish terror. No, you may think you should see "The Last Key" with a friend because being sociable is a good excuse for poor life choices. But the best rationalization for seeing "The Last Key" with another person is being able to look at another soul, and realizing you're not losing it when you think: wait, this one is almost good.

If you must know what this one is about, you should be forewarned that plot, themes, and characters barely matter in the "Insidious" films. That's not a good or a bad thing, it's just something you should accept now that you're presumably committed to watch the third sequel in a cheapo horror series. That said: when we last saw broody psychic Elise (Lin Shaye), she was more convinced than ever that she must use her ability to communicate with ghosts to help unfortunate home-owners who are too stupid to cut bait, and move into less supernaturally busy environs. In this lofty goal, Elise is aided by ostensibly lovable tech-savvy goofuses Tucker (Angus Sampson) and Specs (series co-creator, and "The Last Key" screenwriter Leigh Whannell). And that's about it, that's their story.

Now, Elise must return to her childhood New Mexico home to relive formative traumas involving the mysterious murder of her angelic, but powerless mother Audrey (Tessa Ferrer). Mind you, the house where Elise was raised overlooks some kind of oil derrick and a prison too. It's also where she and her poor brother Christian (Pierce Pope, who is replaced in the film's present day with the somewhat more mature Bruce Davison) were given corporal punishment by deadbeat dad Gerald (Josh Stewart), who may or may not have been haunted by a demon. Also, Christian has two adult daughters, and they're also in danger, even if they don't live in that one house.

None of that really matters here since "The Last Key" is, like its predecessors and the other horror franchises begat by "Saw" and "The Conjuring" co-creator James Wan, as programmatic as a Rube Goldberg machine. These shock-dispensing mechanisms are all so shoddily produced that you should know by now that they will inevitably go off the rails when they must wrap up with a good climactic jolt.

Thankfully, the build-up to several major scare scenes in "The Last Key" is relatively subtle. There are even several moments where the filmmakers psych you out, and make you believe that something's going to jump out at you ... but then nothing does. Which is usually when something really jumps out at you. But in this film, you have to wait a little longer. That kind of defiance of expectations is much appreciated if you go into this new "Insidious" film expecting it to not be good enough to coast on its artful sound design—some really nice floor-boarding creaking, and doorknob jiggling—and even some (dare I say) atmospheric sets.

Ultimately, "The Last Key" just isn't good enough to break the years-hardened mold of expectations that was established and then confirmed by the last three "Insidious" movies. Everything looks different, but nothing has changed: Shaye performs a thankless task admirably, and constantly looks vulnerable enough to cry at the drop of a hat. Whannell never develops his ideas enough to offer a sensible take on personal loss, survivor's guilt, or domestic abuse. And there are several moments where you can't help but wonder "Are these characters really that dumb," "Why aren't they calling the cops," or "What does that even mean?"

So yes, "The Last Key" is still rather ... limited in its appeal. But it's also good enough to feature a momentarily clever twist (if you don't overthink it), and it's got a couple of good fake-outs. And it is awfully fun whenever you can contrive an excuse to turn to your neighbor, and (discreetly) whisper a joke whenever something silly happens (even when it's not always intentionally silly). With these limbo-low expectations in mind: you may enjoy "The Last Key" well enough. Just don't forget to bring a friend. 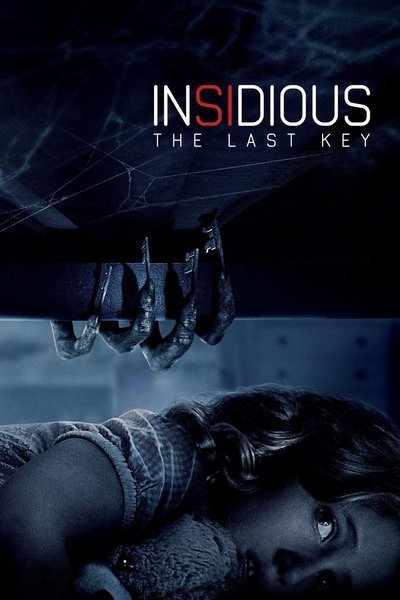