It almost feels like ticket buyers should have to prove that they've seen Brandon Cronenberg's "Possessor" before being allowed admittance to his newest film, "Infinity Pool." That way, they know what they're in for. Once again, the increasingly impressive son of David Cronenberg has made a wildly surreal, unapologetic, violent, and pornographic movie about privilege, morality, and things I couldn't possibly begin to explain in a review. Cronenberg takes unbelievably big swings here—maybe even more than his last movie—and he does not bother to hold your hand along the way. He is a fascinating filmmaker, one who I think has not quite yet made his masterpiece, but I'm becoming increasingly convinced he will soon.

In a set-up that's like "The White Lotus" meets body horror, "Infinity Pool" opens at an exclusive resort in a fictional country. Author James Foster (Alexander Skarsgard) is looking for inspiration while his partner Em (Cleopatra Coleman) tries to support the writer's block that has led to no new books in six years. When a beautiful young woman named Gabi (Mia Goth, phenomenal again) approaches James and tells him that she's a fan, he's instantly captivated. He convinces Em to go off the resort grounds with Gabi and her partner Alban (Jalil Lespert), even though that's against the rules. After a night of drinking, James gets into an accident on the way home, which leads to the death of a local man.

All four travelers are taken in by ominous authorities, led by a perfectly refined Thomas Kretschmann as Thresh. He explains to James that the country they're in has a very explicit policy: murder must be avenged by the victim's son. However, this country also has a way out, a cloning process for the extremely wealthy that will create another James to be murdered while the original one watches. It's a fantastic concept, one that comments on how the uber-rich can pay their way out of anything while also asking what it would do to a person if they watched their own murder.

What it does to James and all the other rich people at the resort is to essentially remove any sort of moral compass. If there's no consequence, why not steal, screw, and murder your way through a hedonistic lifestyle? As Em looks on in horror, Gabi basically pulls James into a world of unadulterated pleasure and violence, and Cronenberg seems to be suggesting that it is only our fear of repercussion that keeps us from indulging in every possible pain and pleasure. The travelers wear local masks that look like deformed faces, which allows even more anonymity. And then there's the ultimate question that would nag at a person—what if the clone was actually the original and you're no longer even the first version of yourself? Someone refers to these people as zombies, and they have a similar amorality.

Although no one would mistake this for a traditional zombie flick. Cronenberg gets increasingly surreal as he takes bigger and bigger chances, obviously excited by the potential of his own premise. They don't all work. I wish the film had a sharper POV and came together in the end with a more coherent message. However, even when "Infinity Pool" is just playfully experimenting with chaos, it's confidently made and compelling. It helps to have committed performers who are all in on Cronenberg's vision, especially a physically demanding performance by Skarsgard and another riveting one from Goth. She has a scene on a car hood that rivals the acclaimed ones she had in Ti West's films last year. She rules.

And I'm starting to think Brandon Cronenberg does too. He keeps developing as a filmmaker by finding new high-concept ways to interrogate what we think we know about human decency. It's got to be a bit frustrating to constantly be compared to his father, but David Cronenberg is one of my favorite filmmakers in the history of the form. And so it's a great compliment to say that "Infinity Pool" works completely divorced from the lineage of the man who made it. Brandon has become his own captivating filmmaker on his own terms. He's no clone.

This review was filed from the Sundance Film Festival. "Infinity Pool" opens on January 27th. 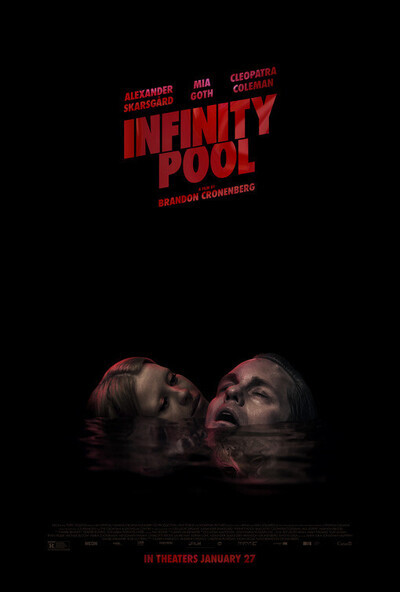