If you’re going to check out the social media “Bonnie and Clyde” riff “Infamous,” do it for Bella Thorne’s performance. From the get-go she has the classically great presence of someone like Sandra Bullock, but with her own scraggly edge. As Arielle, an irascible mix of anti-Florida angst and social media delusion, Thorne dominates numerous scenes that catapult her character from clout-hungry wannabe to gun-selfie superstar, all because she’s been live-streaming robberies with her boyfriend Dean. Within her don’t-give-a-damn freeness, Thorne adds a biting darkness to it as well, naturally building a Millennial who would feel entitled to an audience, and value them more than the human lives that cross her path.

It’s an added bonus to this context that Thorne has her own real-life background as social media master, the kind who gets paid $65,000 for an Instagram post. She's the perfect person to take viewers through the looking glass of Instagram infamy, and that's what makes the clumsiness and shallow nature of "Infamous" all the more frustrating.

This film from writer/director Joshua Caldwell has few good original ideas of its own, and even starts with a stubborn antiquity: Arielle works as a waitress at an old-fashioned diner, and her partner in crime Dean (Jake Manley) is introduced working on a car, as if he were cosplaying Martin Sheen in "Badlands." Minutes into “Infamous,” Arielle has become convinced that something greater awaits her in Hollywood and has told off her friends, ditched her job, attacked her mom's boyfriend for stealing her money, and paired up with the troublesome Dean. The two take off from their small Florida town after accidentally killing Dean’s abusive dad, and because they need cash, decide to rob a gas station. In an undersold eureka moment, Arielle decides to film it, and then post it. They quickly gain a lot of followers, because this is America, the script shrugs.

Here’s the bad news: the Clyde to Thorne’s Bonnie is a total dud, and so too for the most part is the rebellious spree they go on, which takes them across America's southland, and with an escalating number of followers with each crime. Manley's character is so underwritten that it's more fun to imagine what this movie would be like if Arielle did the bank robberies solo, holding a gun and a phone at the same time. You'd much rather follow Arielle than be weighed down by Dean, who is technologically averse to the point of being irrelevant in his own story.

Aside from "Bonnie and Clyde," this is also like a synth-heavy cover of “Badlands,” with specific dreamy montages meant to recall Terrence Malick's brand of romance, especially in the moments where Arielle and Dean are falling in love and taking on old-fashioned rebels just as much as they are taking off their clothes. Here, the white and pink of a descending sun is matched with their candy-colored clothes as they wander the beach, re-contextualizing Malick’s magic hour with a neon aesthetic. It’s a more successful visual brush than the action scenes in which Caldwell lets the camera run for longer than usual, like when they rob a weed dispensary in one take, or have a high-speed shoot-out with Arielle shooting at cops behind them, and frantically yelling at Dean in the driver's seat. You can see what the filmmakers are going for here, but the moments still feel like there's not enough happening, making them more stagnant than they are thrilling.

And yet as much as the movie directly begs for references to classic movies, it makes you wish there were more going on with the inherent ideas of modern violence and social media. There's very little that's provocative about "Infamous," despite these generational treatises being designed to be just that, and far more that's plainly dumb—broadcasting your crimes is a dumb idea, just as ill-thought out as some of the robberies here. Is the script trying to say something about how social media has made us illogical? You can't trust that it is.

The intellectual void shows most in the dialogue that comes in between the bank robberies, where the script repeats its idea that Arielle is suicidally focused on fame to the point of endangering their mission, creating a tedious back-and-forth between new school Arielle and old school Dean. As the film gives up its larger ideas, it’s a cop-out to the kind of conversation this movie should be having—about how Bella Thorne could legitimately do all this in real life, and America would let her get away with it.

What’s lacking here is a vital sense of its elements, in that it’s a road trip movie with a generic sense of Americana aside from how much Arielle hates Florida, and it's a social media riff that name-drops Twitter and Instagram once or twice, but does not represent them visually. The effect is completely distancing—instead of their crimes seeming like a direct reflection of something we could see in our own feeds, it fails to play on how scrolling desensitizes violence. Sporadically splashing the rising number of followers in bright pink texts, or their “OMG!”-level blurbs, is too generic.

As Arielle and Dean trail far behind "Bonnie & Clyde," "Badlands," "Natural Born Killers" and more, the movie does get one spiky, generation-specific idea: Arielle believes to her core that getting to Hollywood is their key to survival, that the privilege of being famous will protect them. Bonnie and Clyde didn’t have that certainty of sanctuary, nor did Mickey and Mallory. But "Infamous" stumbles again when it takes viewers to its own gory end that's meant to damn us—one of many moments that comes off as a bit disconnected, and well, dumb.

Available at drive-in theaters and on VOD today 6/12. 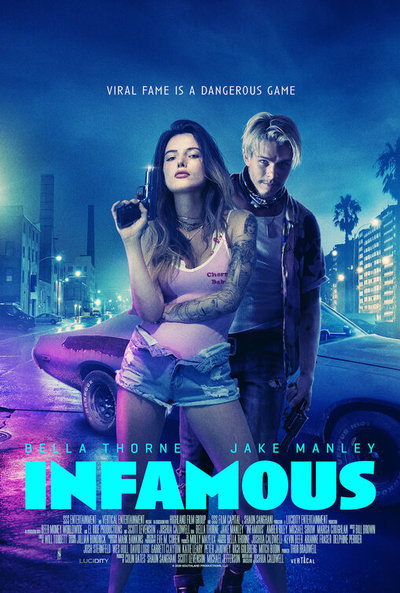