In the Tall Grass

Based on a novella by Stephen King and Joe Hill, Netflix’s “In the Tall Grass” is a fascinating push and pull between a visually striking director and a sometimes-leaden screenwriter, who just happen to be the same person. Vincenzo Natali (“Splice”) wrote and directed this adaptation, and he brings a striking sense of space and visual poetry that feels influenced by his excellent work on shows like “Hannibal” and “American Gods,” but the characters and dialogue often betray the overall mood of the piece. This should be a haunting, claustrophobic nightmare, but Natali over-complicates the source material—just like his characters, our reasons for investing in what happens next get lost in the fields.

The concept for “In the Tall Grass” is one of those wonderfully vicious little things that must have popped Stephen King up in the middle of the night, eager to write it down. A brother and sister named Cal (Avery Whitted) and Becky (Laysla De Oliveira) are driving across country when they stop near a remote church across from a massive field of tall grass. Through the open window, they hear something startling—the sound of a boy crying for help. He’s lost in the grass and can’t find his way out. After some back and forth, Cal and Becky walk into the field to find him, and are quickly lost themselves, but in a way, that doesn’t seem possible. Even though neither is moving, their voices seem to get closer than farther away. In the film’s best moment, they both jump to see where they are in relation to one another, seeing that they’re only about ten feet apart. They jump again and they’re now hundreds of feet apart. They are somehow stuck in a moving maze. Then things get even weirder.

Cal and Becky come across the boy, whose name is Tobin (Will Buie Jr.), and he is unsettling to say the least. When he meets Cal, he’s carrying a dead bird, noting that the grass doesn’t move the dead things. That's a nasty bit of foreshadowing, kid. Tobin may be a little disturbing but he’s nothing compared to his dad, Ross (Patrick Wilson), who seems like the kind of person one shouldn’t trust or follow in any situation. Has the grass driven him insane? Or was he that way before? We will also eventually meet Tobin’s mom (Rachel Wilson) and even another young man named Travis (Harrison Gilbertson) in a film with a very limited cast and almost only one setting that wouldn’t seem like a great one for a horror flick: a field of grass.

The early scenes of “In the Tall Grass” are its most effective, such as the aforementioned jumping scene and the panic that sets in when Cal and Becky realize there’s no way out of their predicament. Imagine being caught in a maze that’s always moving and changing. I wish Natali had spent more time in this phase of his story, allowing the true horror of the dynamic to seep into our bones. Would you just curl up and cry? And how would you respond if you found someone in the grass like Ross, someone who sets off all alarm bells in terms of trust but could be your only salvation? Natali moves too quickly from the atmospheric dread of Cal and Becky’s situation to, without spoiling anything, the more "unusual" aspects of what’s going on in the field, including a rock that may have special powers. He even introduces a bit of temporal displacement to the source material that feels unnecessary. It’s as if everyone involved thought the story needed more than it really does to be effective.

Having said that, there is more visually going on with Natali’s film than the vast majority of streaming originals we’ve seen lately, most of which seem designed to be watched on a phone or out of the corner of your eye while you’re playing with a phone. “Hannibal” was a show that often played with haunting images of threatening cycles of nature, and there’s some of that DNA in the black mud and undulating waves of green in Natali’s film (he directed six episodes of that NBC show). If “In the Tall Grass” didn’t have someone with Natali’s striking visual sense, it could have been a complete disaster.

Horror has a long history of using the natural world as its enemy. “In the Tall Grass” is at its best when it follows this tradition. We all know what it’s like to be lost, far from home and safety, but what if even the traditional rules of direction were completely haphazard? As it gets less relatable, it gets less interesting, but there’s still Wilson’s all-in performance and Natali’s craftsmanship to keep us engaged, stuck in the grass, praying for a way out. 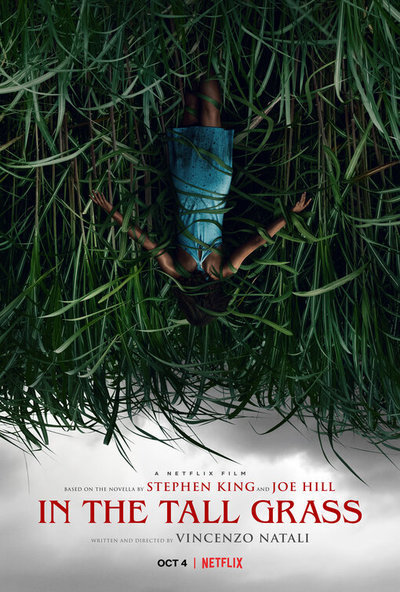 Will Buie Jr. as Tobin Humbolt

Writer (based on the novella by)