In The Mouth Of Madness

Stephen King has a lot of fun playing with the line between reality and fiction - his "Misery" was the story of a fan who takes a horror writer's work a little too seriously - and now here is a movie to turn the tables on King.

John Carpenter's "In the Mouth of Madness" begins with the disappearance of a horror writer named Sutter Cane, whose latest book has caused some of its readers to go mad. The book is a best-seller, and when stores sell out, they're besieged by angry mobs. (It is a sign of our times, I suppose, that citizens are fanned into a frenzy by the book even before they read it.) Enter an insurance fraud investigator named John Trent (Sam Neill), who is sitting in the window of a coffee shop one day when a man across the street picks up an ax, walks through traffic and slams the ax through the shop window. (This shot, showing the man approaching in the background while a quiet conversation proceeds unaware in the foreground, is one of the movie's best.) Turns out the would-be ax murderer is Sutter Cane's former agent.

As an epidemic of apparent paranoid schizophrenia spreads, fueled by the latest Cane novel, we meet Cane's publisher (Charlton Heston) and his book editor, named Linda Styles (Julie Carmen). She hires Trent to investigate the apparent disappearance of Cane; she wants a fraud investigator because she suspects everything is not as it seems. No kidding.

Now the movie lifts off into fantasy, as Trent and Styles go in search of Cane.

There are lots of cross-references to Stephen King, as when Trent cleverly pieces together a map of New Hampshire out of the covers of Cane's books, and when a town named Hobb's Corner figures heavily, just as Castle Rock is the locale of many of King's stories.

As Trent and Styles drive through the night, strange nightmarish apparitions appear by the roadside: innocent ones, like kids on bicycles, and more disturbing ones, like ghouls. They arrive at a town that is not on any map, check into an inn with weird creatures in the basement, and are constantly startled by threats that leap in from out of frame, the oldest trick in the horror movie book.

It's about here - still fairly early in the film - that "In the Mouth of Madness" begins to lose its way. The notion of a book that drives its readers mad is intriguing (especially in a movie where no one thinks to take it off sale), but after the heroes arrive in Hobbs Corner what we essentially have is a horror house movie, in which the protagonists creep along while creatures leap at them.

The novelist Sutter Cane (Jurgen Prochnow) does eventually turn up, with lines like "More people believe in my work than believe in the Bible," but not much is done to develop him, and the movie does what no horror movie can afford to do, which is to play tennis without a net. Stories like this need rules; it's not enough to send the beleaguered hero on a roller-coaster ride through shocking images.

One wonders how "In the Mouth of Madness" might have turned out if the script had contained even a little more wit and ambition.

The fact that the book was driving its readers mad might have provided an opening for some entertaining satire. The Charlton Heston character, a publisher who stands to make millions by selling the book, might have been expanded into more of a hypocrite. What about the government? Is a book that makes you paranoid protected by free speech? The movie starts out with lots of intriguing ideas, and then sidesteps most of them in order to provide a special effects sideshow that looks inspired by the "Nightmare on Elm Street" series.

Ironically, the most recent "Elm Street" movie, "Wes Craven's New Nightmare," about a movie director who finds that his horror films are seeping over into real life, covers similar ground in a much more original way - and it has better special effects. 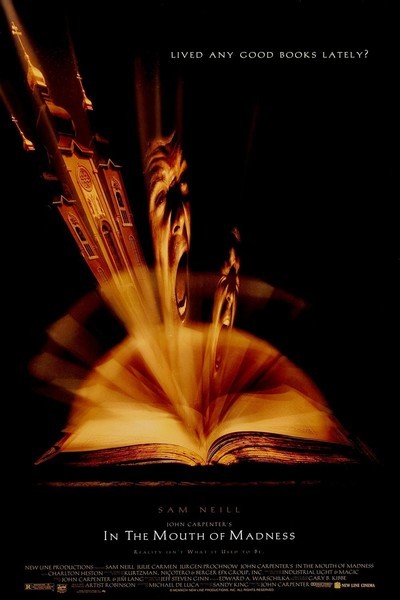 Rated R For Images Of Horror, and For Language