There is a gentle, fable-like aura in Thomas Stuber’s “In The Aisles,” which finds beauty and glimmers of hope in the drab and mind-numbingly symmetrical corridors of a German wholesale supermarket. But never mind where this delicate love story is specifically set—the location is so generic that it can be anywhere in Europe, or even some Costco here in The States. But that’s all a part of Stuber’s modestly universal intentions he gives life to with unassuming casualness. Throughout “In The Aisles,” we feel like we know the blue-collar people the film follows and somehow walked among the towering crates of foods and beverages they are in charge of before. But what we don’t know or haven’t necessarily experienced formerly is the level of kindness that sweetly flows through the layers and layers of familiar-looking shelves. While Stuber’s film acknowledges the soul-sucking nature of these colorless environs—at times, the enormous yet empty aisles resemble a ripe setting of an after-hours zombie apocalypse—the filmmaker loves his characters so much that he can’t help but prioritize their humanity that rises above the surface of it all.

One of those figures is the introverted Christian, played by Franz Rogowski of “Transit” with reserved, observant calm. Sometimes, you do wish he were a little more active or talkative, just to enliven the film’s tempo a touch. And yet, Christian appears a bit shy, a bit awkward. It’s his first day on the job under the command of a gentle boss named Rudi (Andreas Leupold). There, Christian would be in charge of the night shift in the Beverage Department, guided by the caring wings of veteran worker Bruno (Peter Kurth). In the opening moments, Bruno patiently shows Christian the ropes and teaches him the confusing art of operating a forklift. OK, perhaps it’s not strictly art—we’re merely talking about an indoor vehicle that is meant to be driven sideways here. But thanks to Stuber’s insistence on seeing poetic rhythms everywhere he looks, Peter Matjasko’s cinematography approaches something reminiscent of a romantic dance, scored to Strauss’ “The Blue Danube Waltz,” no less.

And we haven’t even gotten to the above-mentioned love story yet, which sees Christian grow an innocent crush on his charming co-worker Marion. Played by a feather-light Sandra Hüller—nothing like the austere character she superbly portrayed in “Toni Erdmann”—Marion engages in mild flirtation with Christian, but being married and carrying scars of her own, doesn’t push the envelope too far. While the duo tiptoe around their mutual affection for one another during stolen moments across the orderly aisles and in lifeless break rooms, Stuber continues to build a big world inside somewhere so conceptually small and limiting. We witness the workers’ after-work beer sessions, Christmas celebrations and various trivial matters throughout ungodly work hours. Always filmed with a strong sense of composition and handle on negative space, these scenes accentuate the tight-knit quality of this makeshift community, while occasionally highlighting the respective loneliness of its members.

Thankfully, the film’s overall optimism doesn’t come with oblivious dust pink hues—no one here is without problems; everyone is clinging onto something to make ends meet or simply, to make it to the next day. With the risk of spoiling things slightly, some aren’t quite that lucky. Eventually, a grim tragedy cuts through the film’s overarching sense of peace and harmony, a troubled past for Christian gets revealed and hardships for Marion, who mysteriously disappears from the shift for a while, are hinted at. Still, occasional flickers of light shine through in abundance whenever workers gather around for cigarette breaks or freely help themselves to expired snacks they are supposed to be disposing, not eating. (It’s a shared secret among the employees.) It’s these patient moments that build a palpable sense of camaraderie.

“In The Aisles” is not so much a film about “what happens in the end”—it’s a bit predictable in that regard—but about how every slice of one’s life matters in making a whole. A lot might be happening when, in fact, nothing seems to happen. Matjasko’s probing camera expresses this sentiment beautifully, capturing the little people of the market from various angles, and sometimes even from the top, like a divine eye. What it sees is a collective soul that dreams of the world outside, refusing to be drowned by the insistent waves, and even hoping to catch a lucky one some day. 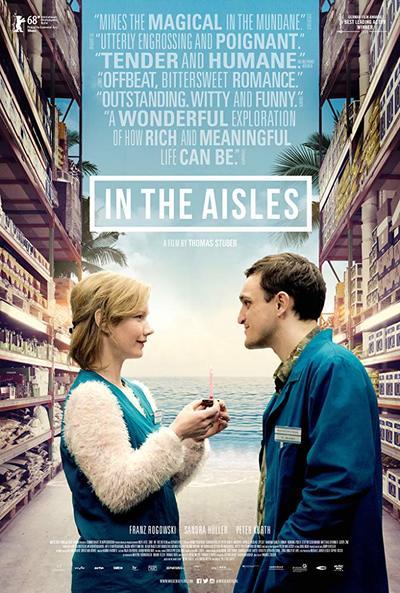