Joe Gatto, Salvatore Vulcano, Brian "Q" Quinn, and James "Murr" Murray hit comedy gold when they came up with the concept of being the Impractical Jokers—a quartet of friends where one person (with an earpiece) is put into an embarrassing candid camera situation, following the instructions of the other three until they can’t anymore. As their pranks turn real people into marks (with various degrees of patience) it’s like “Jackass” without the inevitability of an emergency room visit, the buddies all sharing big laughs behind monitors. And as much as the show has escalating budget sizes for the set-ups, nothing requires them to be exceptionally funny, just a little creative in their cruelty. You don’t get entirely skilled comedy from the Impractical Jokers, but you do get to see four guys who have turned forcefully messing with each other into a welcoming idea.

“Impractical Jokers: The Movie” never provides any good reason for its pranks to be packaged in a movie, but it does speak to the fruitfulness of its concept. The film introduces Joe, Sal, Q, and Murr playing themselves as teenagers in 1992 (a funny idea) who try to sneak into a Paula Abdul concert as security guards, and proceed to wreak havoc. 25 years later, they have evolved into the not-so-practical, professional clowns that the real world knows them as, pranking parents and kids with a Mall Santa segment in the middle of the summer. Afterward, they go to Red Lobster for some blatant product placement (including chatter about the revered biscuits), and Paula Abdul happens to be eating there. Having forgotten that they once trashed her concert, she’s now a fan of theirs and gives them three VIP passes for her show in Miami. But who will be the one left out? The four decide that they’ll go on a road trip and do hidden camera pranks, and whoever loses can’t go. When they crack this plot, they all look right at the camera and pause.

A prank premise like this doesn’t need a movie to achieve an ultimate form, and these four Staten Island stooges know that but try to have some fun with it. Later on, they even incorporate “tell them the plot of the movie!” as part of the directions they give each other during the candid camera pranks. "Impractical Jokers: The Movie" doesn't worry about establishing characters, and any drama between the guys comes with a big wink. It’s kind of refreshing, if not liberating to see it stop from being the movie you think the show might be mutated into, but it still sometimes feels like you’re one of their marks—you bought a ticket for something you could wait to see at home and binge earlier shenanigans instead.

Here’s where the conceit of the premise goes a long way. Just as the skits are easy to binge online (especially when seeing all four of the guys take part in a scheme, like a job interview gone wrong), the movie itself can fill up a fair amount of of its run-time time these different hidden camera pranks. The fun factor is very much like the show: Did you like the improvised presentation pranks from earlier episodes? "Impractical Jokers: The Movie" has the biggest one yet, with hundreds of people watching Q embarrass himself about social media. And like the pranks, it usually comes down to the off-the-cuff stuff that they get each other to say, and if a particular premise is funny enough. “Impractical Jokers: The Movie” made me laugh out loud when Murr has to read off a fake eulogy to a stranger; the words given to him mortify Murr as much as they comically shock us. When the series (and the movie) are successful, it’s that punchy mix of watching embarrassment from a distance, and sharing in everyone's passing laughter.

Co-writer/director Chris Henchy's minimum effort when it comes to the conceit of plot is more obvious in the cheesy interstitials, where the guys best show off their skills for fake laughs in sequences where ideas just pop into their heads as they drive in Q's grandma's car to Florida. The editing can be especially junky during these barely amusing scripted bits, as if still taking after the more scattershot approach of assembling candid camera footage. It’s not the type of sloppy cuts that take you out of a film, but the laziness does show a line that was drawn about just how seriously everyone would take this entire project.

But, as I’m sure you’re thinking: “Is ‘Impractical Jokers: The Movie’ cinema?” Well, it does have the runtime of a feature movie, and a hokey auto-tuned title rap song over the end credits, so yes. Still, it’s not worth the ticket price unless you absolutely need to see the latest episode of "Impractical Jokers" before it becomes available at home. It's a feature film event that still looks like the TV show, where bigger set-ups doesn't necessarily translate to funnier. 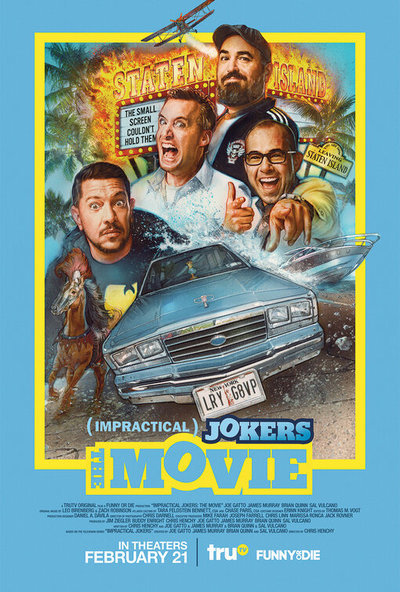 Paula Abdul as Herself