Maria Schrader’s “I’m Your Man,” which won an award at Berlin earlier this year before a limited theatrical release from Bleecker Street next week, is a clever little movie, a film that defies its set-up as a familiar, quirky rom-com to become something deeper and more poignant about the human condition. Of course, using unimaginable technology to highlight what it really means to be human has been the foundation of science fiction for generations but Schrader and co-writer Jan Schomburg (working from a short story by Emma Braslavsky) imbue their genre hybrid with eloquence and intelligence. And it helps a great deal to have two delightful performers to deliver their themes. “I’m Your Man” may not break the mold, but it operates within it with confidence and grace.

Maren Eggert, an actor prize winner at Berlin, plays Alma, a worker at the kind of museum that struggles to find funding (which is basically all museums in 2021). An archaeologist at the Pergamon Museum in Berlin, Alma has the kind of job that gives her unique expertise in how people have (and haven’t) changed over generations of human existence. It’s also kind of a lonely profession, especially lately for Alma. Her ex-partner Julian (Hans Löw) still works in her field, adding to some melancholy, and her only real partner in life is her father (Wolfgang Hübsch), who is succumbing more to dementia every day. Her boss Roger (Failou Seck) encourages her to participate in a daring new project regarding human companionship in order to obtain more funding for her work and because, well, she’s the only single candidate, and the project? It's testing out an android boyfriend.

A suspiciously cheery facilitator (the great Sandra Hüller) introduces Alma to Tom (Dan Stevens of “The Guest” and “Downtown Abbey” fame, speaking German with a slight British accent because Alma likes “exotic” men but not too exotic), who is a dream guy. Tom meets Alma at an event that looks designed to heighten romantic feelings. Beautiful couples dance in the background as Tom woos Alma. It's all a façade. The couples are holograms and Tom is an android, specifically designed to meet all of Alma’s needs. And yet the dynamic feels almost too perfect right from this rom-com set-up. No one wants a partner who breaks down how the likelihood of a car accident improves if the driver adjusts her chair a bit. He’s right. He’s protective. He’s boring.

There’s something wonderfully childlike about Stevens here as he dials down his natural charisma ever so slightly while still understanding why he would be a model for a perfect male partner. Tom has a childlike wonder as if he senses he’s not quite getting it right with Alma, trying to adjust to his partner’s needs with each exchange. There’s a great line about his disconnect with the world in “He’s never understood, yet he understands everything.” When he says something that doesn’t get the programmed response, he knows it, but Stevens doesn’t go broad with that dynamic, almost making him into a classic straight man, looking sideways at a world he’s trying to understand.

Eggert is even better, taking what could have been a generic rom-com leading lady and making her much more complex than that. Not only is Alma hesitant to open up even to a non-human partner, but “I’m Your Man” becomes most fascinating as it starts to examine how perhaps technology hasn’t always been the best thing for humanity. We have this assumption that every tech advancement is also an evolutionary one. Maybe not. Eggert perfectly balances Alma’s intellectual skepticism with the emotions that this forced relationship starts to bring up in her, without making those into classic rom-com clichés. In fact, what starts with a set-up for a relatively predictable comedy gets more poignant and complex in its final act in very rewarding ways.

As Tom starts to unpack Alma’s emotional baggage, he helps clarify how her imperfections are essential. She describes her pain as banal and pathetic, and his response is one of 2021’s best: “It is pathetic. Your pain is pathetic because it’s relative. But it’s also not pathetic, because it’s part of you, and that’s why I love it.” So many movies are about loving each other’s beauty and grace—“I’m Your Man” becomes about how we have to love each other’s pathetic pain too, and, more importantly, we have to love our own. What’s more human than that?

This review was originally filed from the Toronto International Film Festival on September 15th. The film opens theatrically in limited release on September 24th. 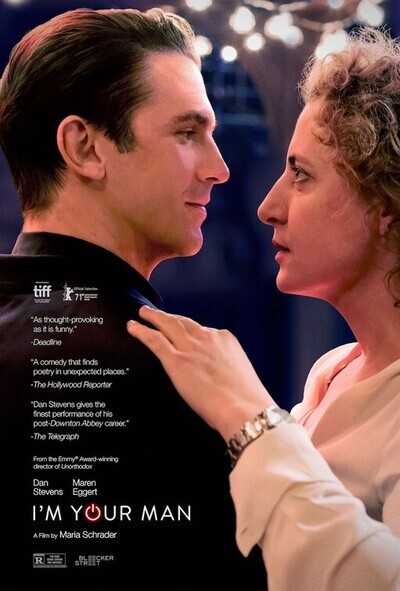 Writer (based on a short story by)