The last thing I want to do is knock a documentary about a topic as vital as the long-unspoken and heavily stigmatized psychological and emotional struggles endured by the men and women in sports. In high school, I found myself gravitating towards theatre in part because I rejected the brand of masculinity too timid to embrace vulnerability. Of course, sports is as universal a language as the arts, and both of which have proven to have their share of toxicity. Even someone as detached from sports as I am couldn’t help cheering on the six-time championship-winning Chicago Bulls team of my youth, or getting swept up in the excitement of watching the Chicago Cubs finally break their century-long losing streak to win the World Series in 2016. The flip side of that euphoria, however, is the frustration that accompanies a loss of one’s favored team and the detrimental effect it can have on fans powerless to control the performance of their idols. If Darryl Roberts’ documentary, “I’m Fine, (Not) Really,” can open the hearts of viewers by giving them a better understanding of the tremendous strain undergone by professional athletes, who are repeatedly told to fight through pressure that has been heightened exponentially by social media, then it will have fulfilled its purpose.

Unfortunately, there are numerous obstacles that this TV special—which can’t really be called a feature at a scant 45 minutes—has embedded in its path toward enlightenment. As Roger Ebert wrote, “It’s not what a film is about, it is how it is about it,” and while this documentary has a four-star topic, it only earns half of that rating for its execution. A reported forty elite athletes were interviewed by Roberts for this program, along with distinguished experts, high school students and various people dubbed “superfans” who are referred to only by their first names. This overabundance of talking heads results in a breathless array of sound bites with jump cuts that gut the silence—and therefore the nuance—between words. In many instances, a tearful subject’s answer is accompanied by an egregiously intrusive score that instantly cheapens the moment, as if the film itself is too timid to linger in the emotion it is supposedly championing. So desperately in need is this special of another pass in the editing room that it cuts off a news commentator mid-word around the three-minute mark. That’s the sort of basic error that could easily be tweaked.

Any thirty-second stretch of “I’m Fine, (Not) Really” could be excerpted and aired as a perfectly adequate promo for Mental Health Awareness Month, but as a cohesive work, the program’s lack of focus results in its message quickly becoming repetitive and glib. Had Roberts took time to involve us in the specifics of a particular subject’s experience, he would’ve built his case much more effectively. Neither top-ranked tennis player Naomi Osaka nor record-setting Olympic gymnast Simone Biles, whose controversial decisions to withdraw from competitions at the peak of their powers to focus on their mental health, are among the interviewees, though it’s clear that their high-profile decisions are what kickstarted this necessary and overdue conversation. Roberts does potently illustrate the racism of angry white male commentators who condescendingly tell Biles that she should be somehow ashamed for prioritizing her health. The only time we see Roberts challenging an interview subject is when he asks superfan Kimberly about her claim that she would’ve “helped” Osaka had she been open about her struggles, as if the athlete and admirer were close friends. This speaks volumes about how important athletes can be to those they entertain, and how that can lead them to become the target of overblown expectations.

A glaring example of the film’s surface-level exploration of its own subject matter is its failure to supply more than a passing glance at the reasons behind Biles’ need to pull out of the team final at the 2021 Olympic Games. Apart from being hindered by the disorienting phenomenon known as “the twisties,” Biles was also grappling with the trauma of being among the over 300 female athletes sexually abused by disgraced USA Gymnastics doctor Larry Nassar, who was subsequently sentenced to life in prison. The filmed testimonials of these abuse survivors at his trial, which were chronicled in Bonni Cohen and Jon Shenk’s great 2020 documentary, “Athlete A,” are among the most powerful and courageous speeches ever delivered. By joining together to speak out about what happened to them, these women were reclaiming their mental health, among other essential facets of themselves, while encouraging others to do the same. Yet all we see of this in “I’m Fine, (Not) Really” is a fleeting image of Nassar that is accompanied by a vague reference to “all the sexual stuff that happened.” Such is the overstuffed nature of this project, which has no time to do proper justice to any of the worthy issues it raises.

What we’re left with are fragments that are, at best, interesting on their own terms, even if they don’t ultimately connect to the bigger picture. Olympic sprinter Michael Johnson reveals that his opinion has shifted during the pandemic years regarding an athlete’s responsibility when using one’s platform—he now believes that if you don’t fight for change, you are part of the problem. Roberts opens the film by claiming that confrontations between players and fans have been on the rise in recent years, likely resulting from society’s general lack of civility perpetuated by Trump, though it can be traced back to 2004’s notorious NBA brawl, The Malice at the Palace. Adding fuel to the fire of enraged fans is the legalization of online gambling, which further raises the stakes for each win and loss. It’s clear that Roberts had the best of intentions when partnering with Olympic track manufacturer, Mondo, to get his message out to the world. Since the version airing this month of “I’m Fine, (Not) Really” plays like a rough cut, my hope is that the director will take his footage back to the editing room and craft a more focused work that is as laudable in its execution as it is in its intent. 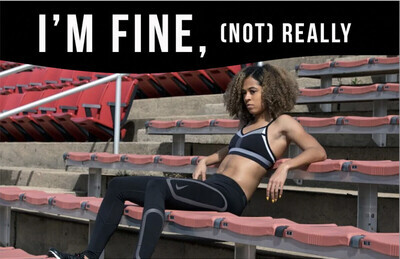