The scruffy, stoic man goes from house to house on one silent street after another, entering gingerly yet working methodically.

He scours the homes for the basic survival necessities he seeks—food, batteries—but he also plucks family photos from their frames. Finally, he finds what he’s ultimately looking for: the bodies, in varying states of decay, which he rolls up in a blanket or shower curtain, wraps in duct tape and lugs away to bury.

At the end of this process, he marks the street in front of the home with a giant X in white spray paint. This place is clean. Then it’s on to the next one.

Watching Peter Dinklage repeatedly go through this process at the start of “I Think We’re Alone Now” is subtly mesmerizing. As director and cinematographer Reed Morano intimately observes this daily routine, she builds a steady, gripping mystery. We wonder to ourselves: What happened to everyone in this upstate New York town, who is this man, and why didn’t the same deadly fate befall him?

Working from a script by Mike Makowsky, Morano lets some of those questions linger while overly explaining others. The lyrical ambiguity of the film’s early moments is far more intriguing than the literal philosophizing of its conclusion. Much of that has to do with Dinklage’s grounded, steely presence. (Truly, he can do no wrong.) Del, as we’ll later learn his character’s name is, seems to thrive within this eerie solitude. At the end of his arduous days, he fishes and cooks what he catches, enjoying his nightly meal with a glass of wine at sunset from the comfort of the library where he worked. He’s alone—or at least he thinks he is, hence the title—but he isn’t lonely. Or to borrow from another famous song, it’s the end of the world as we know it, and he feels fine.

But the arrival of another survivor of this unnamed apocalypse shatters his reverie, and ours. “I Think We’re Alone Now” shifts from being an artful meditation on the nature of isolation to a more traditional study of contrasting characters before ultimately taking a hard turn and becoming a totally different piece of paranoid science fiction. Morano’s imagery remains vivid and often quite haunting; a long tracking shot of a corpse in a colorful comforter being dragged along the ground to its destination, thump-thump-thumping over dirt and rocks along the way, is a standout. But it’s in the service of a story that grows frustratingly conventional. By the end, it almost feels as if Morano—an Emmy winner for her work on “The Handmaid’s Tale” —made two different films, then tried to smush them together, to unsatisfying effect.

Del’s daily rhythms are interrupted when he finds Elle Fanning’s Grace bloodied but breathing behind the wheel of her crashed car. Tall, young and lively, she is conveniently his exact opposite: chatty where he is reticent, free-spirited where he is cautious. (Wouldn’t you know it? That manic pixie dream girl magic is powerful enough to withstand any mass-casualty event.) But Dinklage and Fanning forge a compelling chemistry as their characters feel one another out – as he inspires her to settle down and start helping, and she inspires him to loosen up and start talking. Predictable, sure, but these are actors who consistently make inspired choices, so their ever-evolving dynamic still holds some allure.

And yet, although they’re the only two people in the film (and perhaps on the planet), they remain tantalizingly elusive. This is especially true of Grace. We feel as if we know Del because his process is so revealing of his priorities, but Grace is more of a concept, a device. Still, Fanning infuses the film with a welcome sense of joy and even anarchy, whether she’s banging her head in slow motion in the car or cheerfully looting the supermarket.

But then everything gets upended in the film’s final third, when its languid pacing gives way to sped-up plotting, with Grace as the pawn at its center. The twisty denouement may offer wows for some viewers, but I found it dispiritingly gimmicky rather than profound. Or to borrow from yet another song that was popular in the ‘80s: Help, I’m slipping into The Twilight Zone. 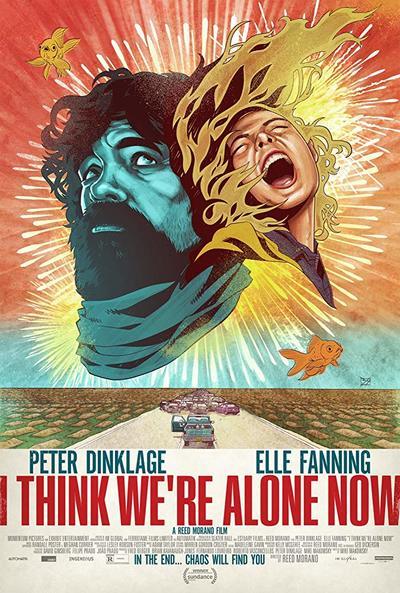