I Know This Much is True

Critics see movies through different lenses. Individual critics have different sweet spots. Does the story work? How are the visuals? Is it cliched? For me, performance is the "way in." Performance is story; performance can redeem clumsy execution, and even bad dialogue. HBO's "I Know This Much is True," a six-part adaptation of Wally Lamb's 1998 best-selling novel, is, often, "too much," in its unremitting misery, trauma, and tragedy. Putting aside for a moment the fact that many people live desperate lives, trapped in self-destructive narratives, "I Know This Much is True" is filled with riveting performances, and not just from Mark Ruffalo, one of our best actors, astonishing here in a double role as twins Dominic and Thomas Birdsey. Everyone, from supporting characters on down to actors who show up in just one scene, is so good that it's a joy to sit back and watch. (Casting director Bonnie Timmerman deserves a shoutout for her instincts in casting, especially the smaller roles). Brought to the screen by Derek Cianfrance (who also did the adaptation), "I Know This Much is True" is often a tough watch. There are times when "compassion fatigue" sets in, particularly in the final episode. But seeing actors do what they do best, with Cianfrance giving them the space to do it, makes "I Know This Much is True" a real feast.

Dominic and Thomas Birdsey were born into a family full of secrets. Their mother, a submissive downtrodden Melissa Leo, never revealed their real father's identity. Their abusive controlling stepfather (John Procaccino) picks out Thomas in particular, perceived as "soft," for punishment. Decades later, Dominic is relatively stable compared to Thomas, who developed schizophrenia and has been in and out of institutions for years. Dominic and Thomas grew up in Three Rivers, Connecticut, a onetime mill town, built by the immigrants who flocked there in the early decades of the 20th century, including Dominic and Thomas' Sicilian grandfather. The opening scene of "I Know This Much is True" is a doozy, showing Thomas in a public library, moaning about God, before chopping off his own hand with a knife, sending the patrons screaming from the room.

Ruffalo's performance is reminiscent of Jeremy Irons in "Dead Ringers," where you literally forget you are watching an actor playing a dual role. The difference between Dominic and Thomas is not just surface-level. This is such a highly skilled performance that the "skill" itself is invisible. As painful as so much of the series is, watching Ruffalo tackle an enormous challenge like this—and pull it off without showing any strain—is thrilling. Kathryn Hahn plays Dominic's ex-wife Dessa, tied to Dominic through memories, both painful and loving. Imogen Poots is Joy, Dominic's new girlfriend, a much younger woman, less inclined to be sympathetic towards Dominic's moods. Rob Huebel is very funny as Leo, Dominic's best friend from way back, a wannabe actor and used car salesman.

But it's the people Dominic meets as he tries, with increasing desperation, to get Thomas out of the facility where he was locked up after the hand-incident, that really ground the story, give it its true structure. The "facility" is a prison, and Thomas has been tossed in with the general population. Dominic is not allowed to see him, and flips out repeatedly, yelling, screaming, even punching a policeman at one point. Lisa Sheffer (Rosie O'Donnell), the social worker advocating for Thomas, finds Dominic almost as difficult to deal with as his disabled brother. Dr. Patel, (Archie Panjabi), the psychiatrist working with Thomas, recognizes almost instantly that Dominic may not be hospitalized or "sick" but he is emotionally disabled, completely trapped in anger, aggression, and pain.

"I Know This Much is True" flows back and forth in time, even going back decades to show what exactly happened with the Sicilian grandfather (Simone Coppo), and the family legacy passed on down to the brothers. This revelation comes because Dominic's mother gave him a manuscript, the memoir written by this mysterious grandfather. Since it's in Italian, Dominic hires a translator (a completely unpredictable Juliette Lewis), who translates some of it and tells Dominic he is not going to like what he reads. Dominic's reading of this eventual translation provides revelations, but also further conviction that his family is "cursed." Breaking up this calcified family narrative makes up the final sequence of "I Know This Much is True."

Shot on 35mm, Derek Cianfrance captures the wintry bleak colors of New England towns: the rains, the sodden leaves, the quiet moody darkness of woods and waterfalls. Cianfrance keeps very close to Dominic's point-of-view, often filming Ruffalo in not just close-up, but close close-up, where his entire face fills the screen, twisted with anguish, or quivering with rage. This recalls Cianfrance's sensitive work in "Blue Valentine," where he kept super close to Michelle Williams and Ryan Gosling, as they fought for their marriage in that mirrored motel room. Cianfrance prioritizes reality, the humdrum quality of many conversations, their repetitions, their pauses. It's an understated approach, which picks up on small bits of behavior, facial expressions, subtext, which really works with such potentially melodramatic material. Cianfrance cares about actors. You can tell in how he films them.

Rosie O'Donnell has the perfect blend of tough-talk realism and bone-deep compassion, evocative of social workers in general, who advocate so hard often against insurmountable odds. Her scenes with Ruffalo are some of the highlights of the series. It's gratifying to see O'Donnell get a role so right for her, which shows us just how good she is. Hahn is often devastating, and you can see why Dessa walked away from Dominic, so caring in many ways (look how devoted he is to his brother), but so trapped in other ways. The scenes between Ruffalo and Panjabi in their therapy sessions crackle with Dominic's tension and resistance, and a completely different dynamic than the scenes with O'Donnell. Dominic walks in demanding Patel to tell him what is going on with Thomas behind those prison walls. And Ruffalo really understands the exhaustion of having to deal with a family member who has a mental illness. He feels trapped. No wonder he is so accident-prone.

I read a review that called this series "poorly timed." The assertion is that no one wants to see all this misery during a pandemic. Speak for yourself. I think the opposite is true. People may still not want to watch, but not because the timing is off. Tragedy and unmanaged pain don't have much cultural cache right now. "Self-empowerment" is where it's at. People making good choices and triumphing in the end. But there's nothing quite like a pandemic to strip away the ballast and make people realize what they have been taking for granted: family, commitment to the people in our lives. "I Know This Much is True" is not pleasant viewing. In many cases, it is very unpleasant, and the flashback to the grandfather's life story, coming so late in the game, works better in the book. But this is about one brother's ferocious advocating for his compromised brother, so much so that he ignores his own life in the process. This is so true, this is what happens in sick family dynamics. We all have our share of old griefs resistant to healing. There is a valued place for fantasy, escape, wish-fulfillment. But a film that doesn't play by those rules isn't doing anything wrong. It's just telling a different story, with equal value.

Dante Alighieri's Divine Comedy starts, famously, “In the middle of the journey of our life I came to myself within a dark wood where the straight way was lost.” I have thought of this line often, at different phases of my life, when I felt myself "within a dark wood," with no "straight way" out. Being lost in a dark wood is the essence of the human condition, which is why it plays such a huge part in dramatic narratives dating back to the Greeks. The final line of the Divine Comedy brings us into the blinding light of God, of Love "which moves the sun and all the other stars."

You can't get to the light without going through the dark. 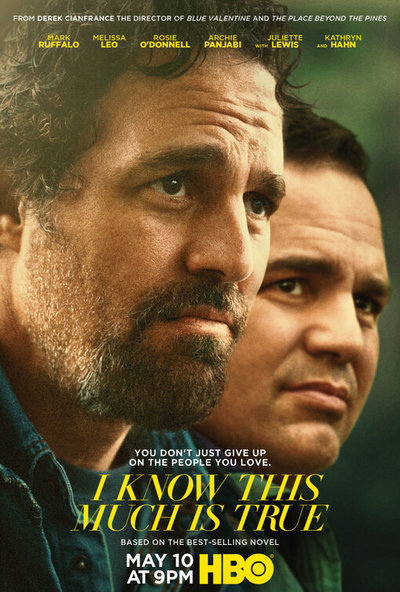 Mark Ruffalo as Dominic and Thomas