I wonder if Aaron Eckhart knew, when he signed on to play eventually-horrifically-disfigured Gotham City District Attorney Harvey Dent in Christopher Nolan's "The Dark Knight," that "it," such as it is, would ever come to "this." Surely it is only his performance as the Batman universe character also-known-as "Two-Face" that gave the makers of "I, Frankenstein," a grievously ill-advised motion picture on every level, the inspiration to cast Eckhart as the undead creation of horror lore.

This particular envisioning of Frankenstein's monster might just as well be called Scarface, for a cut-up visage, and, for the 18th-Century-set intro, some Seattle-grunge-rocker hair, are all that disguise Eckhart's fratinee-idol good looks here. The intro, with narration from the monster—who is very articulate and speaks just like Aaron Eckhart—gives what at first seems an only slight variant on the Shelley original. Frankenstein's all tormented, he took a life for a life, he's alienated and doesn't trust anybody…but wait! As the creature is burying a body, he's confronted by a bevy of demons who want to kidnap him for some reason. And then he's rescued by once-stone gargoyles who fly down to do battle after taking the form of smoking hot winged warriors. They bring the pitiful but unusually powerful fellow to a cathedral where he is given some further back story on the apparently age-old conflict between gargoyles and demons by Leonore, the queen of the gargoyles (played by Miranda Otto, trying hard to look like Jodie Foster).

Anyway: no, I am not making this up. While Frankenstein's monster is not generally understood to be a denizen of the supernatural world as derived from half-digested John Milton, this picture, adapted from a comic book and written and directed by Stuart Beattie (who also concocted the risible scenarios of "Pirates of the Caribbean: The Curse of the Black Pearl" and "G.I. Joe: The Rise of Cobra"), apparently is seeking to reboot the character into some kind of "Underworld" mode. Circumstances and perhaps good luck have prevented me from seeing any of these (an interesting state for a cinephile who was largely raised on horror movies; make of it what you will), and if they are as…hmm, what's the technical term I'm looking for? Oh yes—if they're as goofy as this picture, I can't say I'm sorry to have missed them.

Once "I, Frankenstein" makes it to the present day, the creature, renamed "Adam" (get it?) by the gargoyle queen (no, I can't believe I'm typing this either), has a respectable haircut and he's still pursuing the prince of the demons, who conveniently turns up (in the form of Bill Nighy) overseeing a big science lab run by beautiful doctor Yvonne Strahovski, and they're all about reanimating rats. Or so they think—underneath the lab there's this "Dark City"/"Matrix" style pit filled with elaborate clockwork-style scaffolding holding tens of thousands of corpses that the prince of the demons plans on reanimating and filling with the souls of the "descended" demon. But first he needs the secrets of Frankenstein's creator! Or the creature himself! So when the creature, hell-bent on…something, strolls into the lab, beautiful doctor Strahovski actually says "So the rumors are true."

All this and elaborately mediocre production design, oodles of mediocre CGI-action scenes, and, in the version I personally paid about 20 dollars to see, really uninspired 3D. Earlier in the day yesterday, I had lunch with a few filmmakers I'm friends with, and while we had a bunch of laughs I also heard a lot of career strategizing on how to keep active in a business that doesn't want to make movies period anymore, let alone make movies for adults. The absolute travesty of "I, Frankenstein" thus played slightly less amusingly than it might have otherwise. But, alas, not too much less. 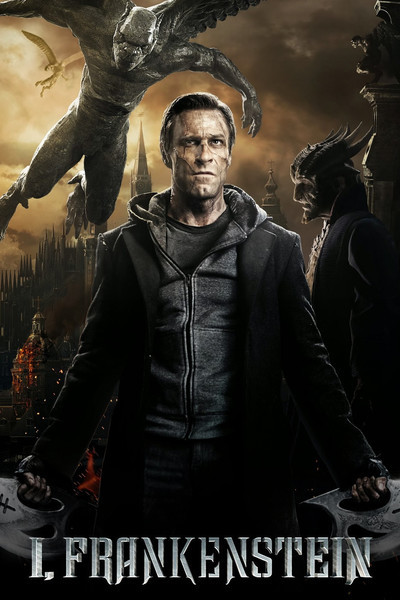