Even if “I Do… Until I Don’t” were not the work of very promising actor/writer/director Lake Bell, it would still be a strange disappointment. Bell is just one of the notable actors here, as joined by Ed Helms, Mary Steenburgen, Paul Reiser, Amber Heard and Wyatt Cenac. It’s baffling, more than anything, as to how all of this talent could create something so uncharacteristic to their collective abilities to make us laugh, or feel something.

“I Do… Until I Don’t” offers scenes from three different marriages. Alice (Bell) and her husband Noah (Ed Helms) run a blinds business that is in need of a boost, and not just from a good pun, which makes for a stale sequence where the couple brainstorm out loud different puns for their business. Alice is also struggling to get pregnant, which is Noah’s fixation even when the power goes out at their small store.

Across town, an older couple, Cybil (Mary Steenburgen) and Harvey (Paul Reiser), are years into their marriage and can’t believe they made it this far. Harvey gets a motorcycle in order to appease some type of crisis, while Cybil tries to reconnect with her estranged daughter, Milly (Hannah Friedman). They might be the most interesting couple in the story, even if their beats are familiar.

The couple written with weakest writing are the young hippies Fanny (Amber Heard) and Zander (Wyatt Cenac). Their problem, if it can be considered that, concerns the fragile bond of their polyamorous ways (which we soon learn are more complicated). They mostly serve to offer the movie cheap hippie jokes about them not understanding personal space, or that they haven't even told their young son that TVs exist.

True to the unimaginative way in which this movie visually tells its story, these subjects become the focus of a documentary by BBC talent Vivian Prudeck (Dolly Wells), a hammy, snooty woman who seeks to prove her thesis that marriage is a sham. Instead, she pitches her film subjects on the idea that marriage should be treated like seven-year contract, and renewed if so desired. This idea isn’t followed through so much in the documentary that Vivian does make with her subjects, but it soon becomes apparent that she will do anything to get footage to prove her point. Aside from making her a tiresome idea of a phony intellectual, she becomes an easy villain, while pushing the couples to the bullet points this movie treats like epiphanies: Relationships are hard; communication can save relationships; love is the answer, etc.

There is a baffling lack of originality to the story that always arises. It starts with Vivian’s English accent doing a voiceover about how love and marriage are not sustainable, which is revealed to be a lecture that Alice is attending. Large jokes then include easy targets like Fanny and Zander’s hippy existence, or a massage parlor that emphasizes on happy endings. The framing device of a documentary about relationships proves not just common as well but underutilized, with most of the marital strife taking place where Vivian is not filming. There’s even a baby about to pop in the finale. It’s ideas like this thrown into the story, along with the group’s idea to later get revenge on the marriage cynic, that show how this movie merely wants to be liked while struggling to have personality.

As well, there’s a strange slightness that comes with its rough draft construction. It’s a movie that’s working through something, as with its portrayals of different relationships that are challenged by communication (spouses, mothers, sisters, friends). But the stakes are rendered low from the start concerning the lifespan of the couples, even with Bell’s game cast trying to sell different depictions of marital strife. Resolutions seem to come rather quickly, with little more than the script’s nice gesture to show lovers resolve their differences.

There's little to take away from this film, aside from the anamorphic view of Long Beach, where bright sunny days contrast a desaturated look with some Woody Allen free flow. And as Bell seems to own clichés more than challenge them, or let comic jokes lay flat, “I Do… Until I Don’t” marks a strange turn from the characteristic creativity of her previous efforts. It isn’t as painful as breaking up, but it gets close. 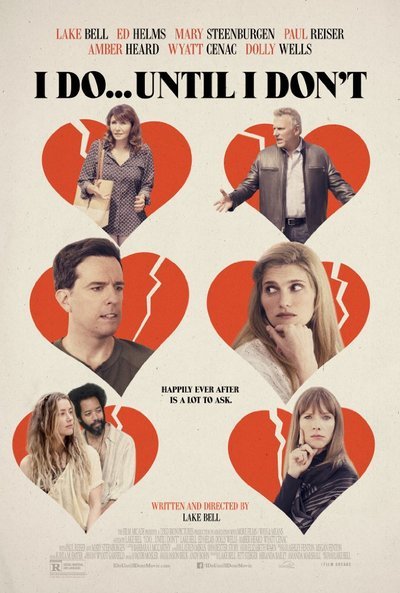