“In 39 years, I have never written these words in a movie review, but here they are: You owe it to yourself to see this film. If you do not, and you have grandchildren, you should explain to them why you decided not to.” This is what Roger Ebert wrote in his review of Davis Guggenheim’s Oscar-winning 2006 documentary, “An Inconvenient Truth,” which sounded the alarm on climate change by providing enormously persuasive evidence that our species must alter its way of living in order to halt the devastating impact of greenhouse gases. Most of the people who saw the picture praised its message—and then moved on, not because they didn’t care so much as they had more pressing matters vying for their attention. Greta Thunberg was only three years old when the film was released, and in Nathan Grossman’s new documentary, “I Am Greta,” we see home video footage of the future climate activist in 2006 before her Asperger’s syndrome and empathy for the planet caused her to become laser-focused on global warming. Simply ignoring the world’s inaction on tackling the catastrophic crisis proved to be an impossible act for Thunberg, and when she was only 15, she began sitting outside the Swedish Parliament while brandishing her now-infamous sign reading, “School Strike for the Climate,” in the days leading up to her country’s 2018 general elections.

After politicians were elected who refused to prioritize the environment, Thunberg decided to hold her school strikes every Friday. Little did Grossman realize during his early days of following Thunberg with his camera that he was chronicling the origins of what would become a global movement. “I Am Greta” is being released on the 117th day of Thunberg’s weekly “Fridays for Future” strikes, which have been held virtually throughout much of this year due to the COVID-19 pandemic. In a way, the film is perfectly timed as a crucial reminder of how the battle for change, regardless of the recent U.S. election results, has only begun. Climate change requires us to remove ourselves from our comfort zone, just as coronavirus has, and create new sustainable ways of living in order to prevent our own extinction. President-elect Joe Biden has already committed to supporting transformational measures that aim to combat environmental destruction, which includes having the United States rejoin the Paris Agreement, which our country under the Trump Administration officially exited earlier this month. Though Trump has continuously branded the decrease of greenhouse-gas-emissions a “job killer,” investing in renewable forms of energy would create new jobs that wouldn’t put the health of our planet—and the employees themselves—at risk.

Since Thunberg is one of the most gifted and arresting speakers alive today, “I Am Greta” is inherently compelling as a behind-the-scenes document of the vulnerabilities masked by her forceful persona. We see the mounting concern of her supportive father, Svante, who is hyper-aware of her social anxiety and tendency to ignore her own needs. There is genuine tension between them when he plucks her out of a rally and insists that she eat something. He also attempts, without success, to dissuade her from using disquieting yet truthful terms such as “sixth mass extinction” in her speeches, which she edits to the point of exhaustion in order to remove any grammatical or translational errors. Her determination to not be viewed as a hypocrite inspires her family to adjust their way of living accordingly by refusing to eat meat and dairy, travel via airplane or purchase nonessential items. The most harrowing sequence occurs during Thunberg’s much-publicized two-week voyage from Plymouth, England to the U.S. Climate Summit in New York City, a staggering act of conviction worthy of Herzog’s lens. As waves crash onto the roof of her small boat, Thunberg cries into her phone about the weight that has been placed on her shoulders, exuding a frustration that later fueled her subsequent speech at the conference, designed to chastise those who look to young people for hope without joining the cause themselves. There are also endearing glimmers of Thunberg’s youthful spirit that are far removed from her purposefully grim composure at the podium, such as her look of embarrassment when a passenger disrupts her workout routine on an electric train.

What’s surprising is how little Grossman’s film is concerned with explaining the science Thunberg tirelessly champions (the Albedo Effect and Keeling Curve are referenced but never explained) or fighting against the criticisms of naysayers who claim she can’t come up with specific solutions to the crisis. Of course, her shattering eloquence has repeatedly made her adult opponents—President Trump included—look all the more like mud-slinging infants with their bullying rhetoric. Suggestions of impending doom are only viewed through visual juxtaposition, such as when news reports of escalating heat around the world are heard over a shot of endless gas-guzzling cars on an assembly line, headed for a road to nowhere. Thunberg’s plea for us to act as if “our house is on fire” has been chillingly reflected by the monstrous forest fires that have annually ravaged the west coast in recent years and are prominently featured in the opening credits. No viewer who has already schooled themselves in Thunberg’s life will find any new information regarding her backstory. We are simply reminded that her trauma triggered by climate change began after she saw a documentary at age 8, leading her to be diagnosed with selective mutism, a disorder that impairs her ability to speak with others. After three years of silence, Thunberg’s voice has resonated across each continent, emerging as the world’s conscience at a time when science has been routinely dismissed by various leaders as fake news.

“I Am Greta” warrants a recommendation purely on the basis of Thunberg herself, whose formidable passion and disarming humanity shine through in every frame. Of course, she has zero interest in her own popularity when it is removed from her cause, and detests taking patronizing selfies with politicians who fail to enact concrete change. In a recent virtual conversation with iconic nature historian David Attenborough, held as part of the Wildscreen Festival, the now 17-year-old Thunberg spoke thoughtfully of how Grossman’s movie is more about the “absurdity of celebrity culture” and how it misses the point of her efforts. All that matters to her it is that others will do their homework, and a first essential step would be viewing the recent Netflix documentary, “David Attenborough: A Life on Our Planet,” directed by Alastair Fothergill, Jonathan Hughes and Keith Scholey. Taking the form of a witness statement from its revered 94-year-old broadcaster, the picture illustrates the devastating impact of carbon on our atmosphere, and how we must increase the biodiversity on our planet if our species hopes to survive the next century. You owe it to yourself to see that film. Thunberg couldn’t care less if you skipped this one. 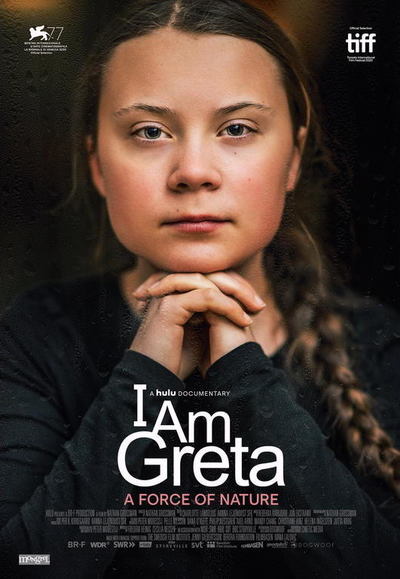 Greta Thunberg as Self

Arnold Schwarzenegger as Self

António Guterres as Self

Malena Ernman as Self

Svante Thunberg as Self