Australian filmmaker Genevieve Bailey hopscotched around the globe to make her feature documentary debut “I Am Eleven,” in which she interviews 11-year-old boys and girls about every topic imaginable. From love and marriage to war and religion to culture and the environment, they speak honestly, often humorously, and from the heart.

Why this age, specifically? Bailey explains in an opening voiceover that making the movie occurred to her during a low point in her life, and she wanted to go back to a happier time. For her, that was age 11, “when the world feels big, in a good way, and it was at our feet.” Serving as director, producer, cinematographer and editor, Bailey traveled the world and talked to a wide variety of young people in hopes of making a film that’s both optimistic and real.

It’s impossible not to appreciate her desire to shine a light on corners of the planet that so many of us will never see – that so many of us would never even think to consider. “I Am Eleven” should be especially beneficial for viewers who are around this age themselves – probably even more so than for adults. The sense of universality it achieves should serve as a source of comfort and maybe even inspiration. It’s a small world after all.

But in an effort to gather as many diverse viewpoints as possible, Bailey actually has included too many kids – 25, to be exact – to the extent that the impact of hearing from them becomes repetitive and diluted. She bounces around so quickly between all of them that there’s no sense of context, no real deep connection that ever forms with any of them. There’s a sameness of pacing and tone that ends up being a little dull; very little stands out substantively.

She and her crew went to the effort to make all these treks and talk to all these kids, and surely she wanted to honor the time commitment and the trust they placed in her. But the result too often feels frustratingly superficial – and, to be honest, some kids are way more interesting than others.

Take Jamira, a part-Aboriginal girl from Australia, for example. She’s radiant and inquisitive and she discusses her mixed heritage while posters of Justin Bieber and Miley Cyrus adorn the walls of her bedroom behind her.

Or Remi, the very serious and sensitive French boy who decries his country as rich and arrogant: “I am not a citizen of France,” he says, his voice already changing. “I am a citizen of the world.”

Or Billy, a hilarious and sweet-natured Londoner whose accent is so thick, Bailey thought he required subtitles. Apparently somewhere on the autism spectrum (the film doesn’t specify, but his father alludes to the great developmental progress he’s made), Billy has immediate and outspoken opinions on everything from soccer to girls to the “Dirty Dancing” movies. (He likes them “because they have great dancing moves, and plus nice romance.”)

Or Siham, a Moroccan girl who’s surrounded by kids of various ages, all of whom are living in a small village in poverty. She smiles nervously as she tells her interviewer: “We are only poor people here.” But she also shares that she likes studying, sports and travel.

These are among the kids whose experiences stick with you, the ones the film could have dug more deeply with to let us get to know them better. These are rich, enlightening, moving stories. But too often, Bailey presents them as a series of talking heads on a particular topic, briskly skimming when stopping and chatting a little longer would have been more powerful.

A group of girls in an Indian orphanage are essentially interchangeable, we get to know so little about them as individuals. Same with Osama and Sahin, the two Iranian boys living in Sweden who want to be rappers. How often do you see that combination on film? Now that’s different.

Bailey has achieved the purpose she set out at the film’s start. She’s made a film that’s optimistic, ultimately. But it would have benefitted from being a lot more real. 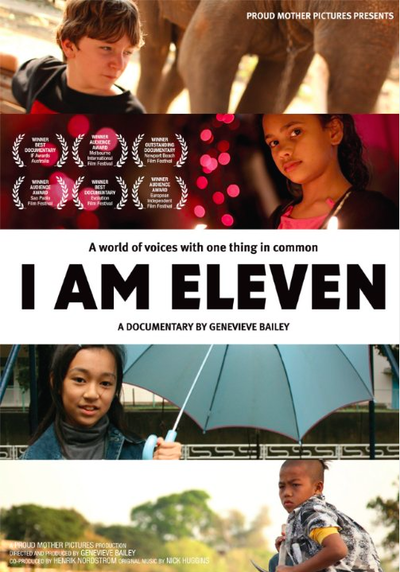