"I Am D.B. Cooper" opens in 1974 with a shot of a raggedy-looking guy with two black eyes hoovering a white powder up his nose in the back seat of a car. (It could be cocaine, but as we learn later, it could just as well be an amphetamine referred to by the denizens of this movie's world as "criss-cross speed.”) We then cut back to "3 years earlier," with a depiction of the same guy, cleaned up, wearing a parachute, carrying a satchel, and jumping out of a passenger plane.

Apparently, this is what a criminal who called himself D.B. Cooper did in 1971. Boarded a plane in Portland, Oregon—its final destination being Seattle, Washington, only a half-hour away—told a flight attendant he was carrying explosives, demanded a $200,000 ransom, got it in Seattle, instructed the pilots to chart a course to New Mexico—he also got some parachutes, sure—and, a half-hour into the second flight, jumped from the plane and was never seen again. The case is still unsolved.

Until now? With this queasy mix of documentary and fiction from director T.J. Regan, the film's opening sequence climaxes, so to speak, with footage set in the present day in which one Rodney Lewis Bonnifield asserts, "I am D.B. Cooper."

Bonnifield is an old white guy, overweight and unshaven. Wow, what are the odds that D.B. Cooper would turn out to be such a person, right? Anyway, the documentary portion of the movie focuses on real-life bail bondsmen Carlos Rocha and Mike Rocha, the movie's executive producers, and how their fulfillment of a warrant for Bonnifield yielded the fantastic story Regan and company recreate in fictional mode.

"The people got a right to know what I am and who I am," Bonnifield asserts. Mostly, he comes off as the very guy the Rochas caught up with: a dumb slob who got into a knife fight. But the tale Bonnifield weaves includes sweeping adventures in criminality, as well as an on-the-road affair with singer Rita Coolidge. The filmmakers include an "interview" with a young, fictionalized Coolidge, played by Rainee Blake. As well as a fake interview with Bonnifield's parents, also played by actors, which is structured like a bad comedy routine. "He was a little entrepreneur," Fake Mom says. "He was a little bastard," counters Fake Dad.

All this is tiresome enough on its own. (And Ryan Cory's performance as the criminal, styling young 1970s Bonnifield as a thoroughly 21st century, well, dickhead, compounds the tedium.) But wait, there's more: It's interwoven with an equally tiresome account of the Rochas looking for D.B. Cooper's loot—Bonnifield has provided them with instructions on where to find it. Spoiler alert: if you caught the Geraldo Rivera "Al Capone's Vault" live television event, you know how this is going to turn out.

Also, if I were Rita Coolidge (whose sole factual association with Cooper was contributing a couple of songs to the soundtrack of the Treat-Williams-starring "In Search of D.B. Cooper"), I'd sue these guys.

The whole enterprise brings up a question, though, which I will state in all caps, since it was playing in all caps as it repeated itself in my head, over and over, all through the movie. The question is: WHO CARES?

Yes, Cooper's crime was notable in some of its particulars. The particulars are kind of mind-numbingly stupid. (Perhaps underscoring the "This is Spinal Tap" adage about the thin line between stupid and clever.) The fact that "Cooper" has never been apprehended I think we can put down to a quirk of fate, rather than an achievement of any particular ingenuity. (And, indeed, that's how it's more or less depicted in the Bonnifield narrative, for whatever that's worth.) And, you know, $200,000 is a lot of money, but it's not a lot of money. Remember in the "Austin Powers" movies where the 1960s standard was a million? These days, people have won billion-dollar lottery prizes spending less money than "D.B. Cooper" did on his plane ticket. From where I sat during the 1970s and beyond, the so-called legend of Cooper was one of the least consequential crossings of pop culture and true crime ever. Even if you disagree, I don't think you'll find much satisfaction or pleasure in this grievously ill-conceived exercise. 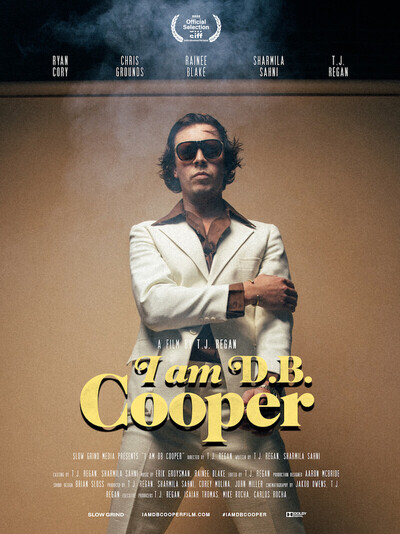