How to Be Single

Think of “How to Be Single” as a cinematic Whitman’s Sampler: There are enough pieces that work to offset the pieces that don’t. And “pieces” really is the key word here, because this romantic comedy about the dating adventures of young people in the big city feels like it consists of several bits scattered about and then loosely tied together.

Cohesively, it’s just a snip or two away from those insipid Garry Marshall ensemble comedies that come out around various holidays. (And on this Valentine’s Day, it’s certainly preferable to his 2010 film “Valentine’s Day.”) One subplot here seems so disconnected from all the others, it could have been eliminated entirely and not made much of a difference to the central story.

From a tonal perspective, though, director Christian Ditter pulls off a pretty tricky feat in balancing the film’s pervasive bawdiness with moments of real substance and heart. And he’s got such a winning cast—including Dakota Johnson, Rebel Wilson, Leslie Mann, Jake Lacy, Damon Wayans Jr. and Anders Holm—that the whole experience ends up being way more enjoyable than you might expect.

Loosely based on the novel by Liz Tuccillo, co-author of “He’s Just Not That Into You,” “How to Be Single” follows several characters and their romantic entanglements—or their strenuous efforts to avoid them. At the start, we see Johnson’s character, sweet and shy Alice, insisting to her longtime boyfriend at Wesleyan, Josh (Nicholas Braun), that they should see what it’s like to date other people before settling comfortably into a lifetime of monogamy together.

Then it’s off to that hotbed of singledom known as New York City, where Alice accepts a job as a paralegal at a prestigious law firm and quickly sparks up a friendship with the brashly confident and unapologetically promiscuous Robin (Rebel Wilson), who takes Alice under her wing and teaches her … how to be single. Hence the title. This means random, late-night hookups with Tom (Anders Holm), the flirty party boy who owns the local bar, but also the possibility of something more substantial with handsome and successful single dad David (Damon Wayans Jr.), whom she meets at an alumni mixer.

One of the best parts of the script from Abby Kohn & Marc Silverstein (“He’s Just Not That Into You”) and Dana Fox (“Couples Retreat”)—although those previous films theoretically wouldn’t provide much cause for optimism—is the way that it judges none of the characters for their sexual choices. Robin, who proudly proclaims that her apartment is just a place where she goes to shower in the morning after staying out all night, is having the best time of everyone in this movie—and everyone in Manhattan, for that matter. And, not to give away how any of these story lines turn out, it’s rather refreshing to find that not everyone ends up coupled up and happy. Some end up alone—and happy. There are actual permutations and unpredictable outcomes here.

Also in the mix are Alice’s sister, Meg (Leslie Mann), a fiercely independent obstetrician who insists she doesn’t want a baby of her own—until she does—and the adorably goofy Ken (Jake Lacy), with whom she’s reluctant to get involved because he’s so much younger. (And if you’re keeping score at home, yes, it’s a bit distracting that Johnson and Mann are 17 years apart but they’re supposed to be sisters; having said that, the two actresses also share several scenes together that radiate real warmth and tenderness.)

Which brings us to the one piece that doesn’t really fit: a subplot involving Alison Brie as Lucy, who’s scientifically broken down all the online dating services in hopes of marrying the perfect man. She’s sort of a preppy, Type A-cliché, which is intentional—and which is supposed to make her potential romantic connection with Tom such a surprise. (Her entire existence in his bar, which is directly beneath her apartment, consists of using it for free Wi-Fi and meeting bad blind dates there.) The fact that Brie makes this crazy-eyed character tolerable is a testament to the likability of her presence. But there’s really nothing that ties her to the rest of the narrative, which renders her a bit of an afterthought.

When Lucy shows up at Alice’s rooftop birthday party with yet another would-be soul mate (Jason Mantzoukas, enjoyably odd as always), it’s like: How does she even know Alice? They’ve never had a single conversation. Did everybody who hangs out at the bar get an Evite? That’s the tough part, though, of telling a story with an ensemble cast and giving everyone time to shine. It would have been lovely to see more of Wayans Jr., as well—although he gets one brief scene toward the absolute end that’s just devastating. (You will sob. And it’s earned.)

At the film’s center, though, Johnson serves as our sweetly relatable guide through a sea of big personalities—a woman in her early 20s who questions both her loneliness and the need to be someone’s girlfriend. As in “Fifty Shades of Grey,” Johnson once again reveals a naturalism on camera that’s magnetic, and a keen sense of sly comic timing.

Director Christian Ditter, meanwhile, displays a surprising amount of artistry in depicting her journey: He creates the sensation that we’re watching one long, fluid process as Alice moves into her tiny Brooklyn apartment, piece by piece. And when she descends a fire escape staircase to catch a quiet moment alone during her birthday party, it looks as if she’s floating on the night sky.

Like “Sex and the City,” which will surely come to mind as you’re watching this, “How to Be Single” exists in a magical New York City full of stylish wardrobes and sprawling apartments—but there are worse places to visit, especially on a holiday weekend in February. 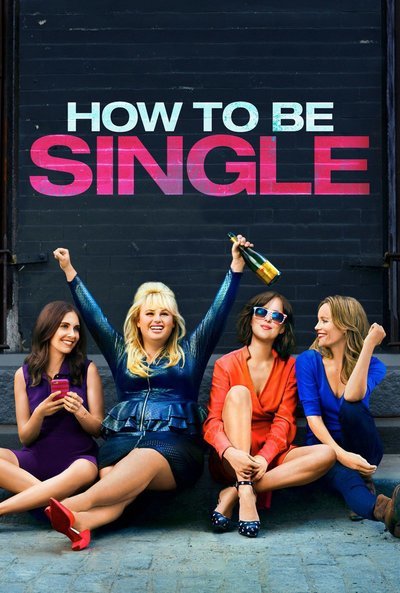 Rated R for sexual content and strong language throughout.

Writer (novel "How to Be Single")