"Hotel Transylvania: Transformania," the fourth in the animated series about the vampire who runs a residential hotel for monsters, is the brightest, funniest, sweetest, and all-around best one yet. Roger Ebert liked to describe movies as “empathy machines.” “Hotel Transylvania: Transformania” is a good example. The struggle of monsters and humans to understand each other is taken to its ultimate stage by switching places thanks to a transforming ray that works and then breaks, leaving them stuck that way until they can find a replacement just in time for a happy ending.

Devoted single dad Drac (Brian Hull replacing Adam Sandler) has never been comfortable with his human son-in-law Johnny (Andy Samberg). It is more than just the difference between monsters and humans. Drac is by nature restrained, anxious, and resistant to change while Johnny is ebullient, adventuresome, and impulsive. As the movie opens, the hotel is celebrating the 125th anniversary of the hotel and Drag is getting ready to turn the hotel over to his daughter, Mavis (Selena Gomez, now producer of the film as well as star) and Johnny. But Johnny’s enthusiastic reaction and plans for changes make him reconsider. Drac lies to Johnny, telling him he would give them the hotel, but. “real estate law” forbids transfer of property to a human. Johnny does not want to disappoint Mavis, so he impulsively visits the basement lab of mad scientist Van Helsing (Jim Gaffigan), who happens to have a transforming ray on hand. Prudently, he first tests it on an actual guinea pig. Satisfied with the monster-fied results, he trains it on Johnny, who is delighted with his new dragon-like monster self.

When the ray accidentally hits Drac, though, the results are not nearly as welcome. No powers! No fangs! Receding hairline! And worst of all, a dad bod! Talk about terrifying! The magic monster-making crystal breaks, and the only way to return them to their original forms is to find another one, following a monster-ific GPS to a rainforest in South America. And so, it is a road movie, with two very different people, now suddenly different from their own selves as well as from each other, learning to work together along the way.

That is part of what makes it so much fun, because the characters are so far from their most fundamental sense of who they are. Drac goes from frustrated fury at not being able to fly or use mind control, to delight at experiencing what seems very ordinary to us—sunlight. He may be a vampire, but he is horrified when he is confronted by another species of blood-sucker—mosquitos.

The animation is exceptionally detailed, supple and dynamic. The interplay of the images with the action and dialogue adds emphasis and clever twists that will reward a second and third viewing. There is a lively plasticity to the characters that is exaggerated enough to take advantage of the animator’s unlimited imagination while staying completely consistent with the internal reality of the world where, after three other movies plus shorts and video games with these characters, we feel at home. The gestures and facial expressions are hilarious but always in service of story and character.

And the animators have a blast with the various transformations. After three movies, it's a lot of fun to see the human side of the other monsters. And that means “see” in the most literal sense. Griffin the Invisible Man (David Spade) had been nothing but a pair of glasses until his transformation; his friends are surprised to find out he’d been naked the whole time. For Griffin himself, the equally disconcerting surprise is that he is balding. We also learn what, or rather who, has been inside the thousands-of-years-old wrapping around Murray the Mummy (Keegan-Michael Key) and what Wayne the Wolfman (Steve Buscemi) looks like without all the fur (though still pretty hairy). The un-pieced-together Frankenstein (Brad Abrell) turns out to be a selfie-taking dreamboat. At least he thinks so. His wife, Eunice (Fran Drescher) is not convinced.

Gomez’s wry, understated delivery made her a perfect foil for Steve Martin and Martin Short in the Hulu series “Only Murders in the Building.” Here it works well as the voice of reason in the midst of all of the insanity, and she adds enough warmth to show her love for both Johnny and Drac. She and Ericka Van Helsing (Kathryn Hahn) bring the other wives to chase after the monster/humans and human/monster (in a zeppelin!) to find the crystal before it's too late to transform back.

With its Indiana Jones-style adventure, "Hotel Transylvania: Transformania" combines monster powers lost and found (love those innumerable wolf cubs), pure joyous silliness, and surprisingly touching insights into family relationships. My Yelp review for this hotel is “would do business again.” 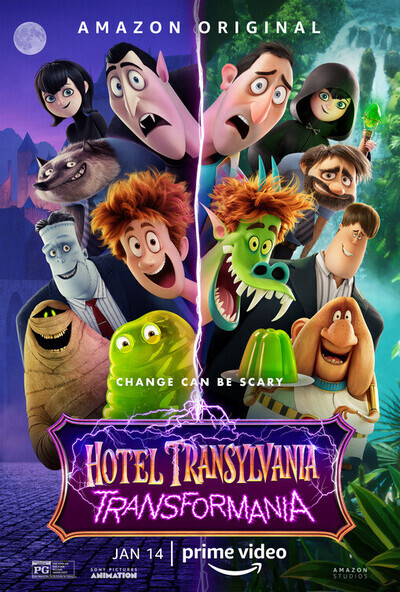 Rated PG for some action and rude humor including cartoon nudity.