How do we establish a proper ethics code around a narrative film that dramatically recreates an act of real-life terrorism? How much time do we need to allow between the tragedy’s actual occurrence and its Hollywood-ized on-screen reflection, with which people would eventually fill their entertainment-hungry eyeballs while munching on their popcorn? When should these movies be released—is the unlucky timing right after a deadly attack in Christchurch, New Zealand a touch … insensitive? Taking it a step further, do these films that give unspeakable carnage, like the Mumbai terror attacks of 2008, a “The Poseidon Adventure” action movie treatment, need to be made? I won’t pretend to have the answers to these questions. I will just say, it’s complicated—cinema has always served as a reflection of its times and storytellers are still feeling their way through the unique horrors of the 21st Century. And we aren’t even a quarter of the way there yet.

I bring up these questions because they kept crawling in my mind as I watched and wrestled with Anthony Maras’ searing, startlingly confident debut “Hotel Mumbai,” where every fatal bullet fired out of the ruthless terrorists’ semi-automatic weapons hit me at my core. I must admit: this skilled, historical action film was one of the toughest, most disquieting sits I can remember in a while—tougher than Paul Greengrass’ “July 22” and on par with the same filmmaker’s masterful “United 93.”  So much that I almost (almost) resented Maras’ first-rate filmmaking chops and unflinching command of camera and action that managed to mentally and physically place me among the countless victims and survivors of the majestic Taj Mahal Palace Hotel, where the majority of his film (co-written by Maras and John Collee) is set.

A small amount of relief: In “Hotel Mumbai,” the writing duo persistently emphasizes the complex humanity of the characters. In that, we are not just watching a jingoistic, thinly sketched battle between the good and the bad. There are shades of nuance in the good here and an abusive hierarchy within the evil, delicately portrayed not to make the audience feel for the terrorists but to help them understand the chilling indestructibly of terror networks and the terrorist mindset. The ones that murder dozens at random in the hotel are a group of merciless yet disposable men; brainwashed by religious lies, radicalized and sent to carry out massacres by the powerful those who coldly give commands at the other end of a phone line.

Before we reach the glorious hotel, Maras swiftly familiarizes us with the players, starting with the Lashkar-e-Taiba jihadists, who approach the city by boats and begin their fatal attacks across the bustling metropolis, including a major transportation hub and a restaurant. We then meet the happily married father Arjun (an astonishingly brave Dev Patel, carrying most of the narrative), an employee and waiter at the Taj, who is about to lose a lucrative shift of large tips after misplacing his shoes. His (soon-to-be-a-hero) boss Hemant Oberoi (the legendary Anupam Kher of “The Big Sick”) surely won’t let him run his errands in sandals at such a highbrow, first-class establishment that takes pride in treating the guests as God. Borrowing a pair too small for his feet at the last minute (a tiny but rich detail you will hold on to while following him), Arjun earns his spot back in the service roster. The evening would be populated by a number of VIP guests, including an arrogant, womanizing Russian businessman (Jason Isaacs with a curious accent) and a well-off family consisting of the architect David (Armie Hammer, excellent with little to do), his wife Zahra (Nazanin Boniadi, who steals the film), their newborn baby (his cries while in-hiding are a recurring source of suspense) and a heroic babysitter (Tilda Cobham-Hervey).

The characters (apart from Oberoi) are fictional for the most part and come with plenty of dramatic embellishments that supplement the basic story. Along the way, phones run out of battery (among the most Hollywood plot details that repeat), families get separated, egotism becomes certain individuals’ worst enemy and racial profiling plagues a group of exhausted survivors’ unity. Thankfully, Maras and Collee don’t give white privilege an easy pass when the circumstances grow direr by the second. (Except, in an earlier scene, they somehow grant David the overconfidence to order an extremely Americanized burger meal at Taj’s world-class restaurant.) Maras establishes unassailable directorial authority throughout, guiding the viewer through a maze of rooms, hallways and backdoor escape routes with clear orientation, even when one loses count of the fallen bodies. Nick Remy Matthews’ documentary-like cinematography and the work of co-editors Maras and Peter McNulty weave together a massive canvas, making all of it feel like a claustrophobic horror film unfolding in real-time.

Still, after the substantially scaled catastrophe comes to an end, the question remains: what do we do with all this filmmaking dexterity when it serves an effort that, despite the best of intentions, feels exploitative and too soon? I will leave that decision up to you, as I suspect the answer will depend on your tolerance level. For my part, I will look forward to seeing what the promising Maras does next. 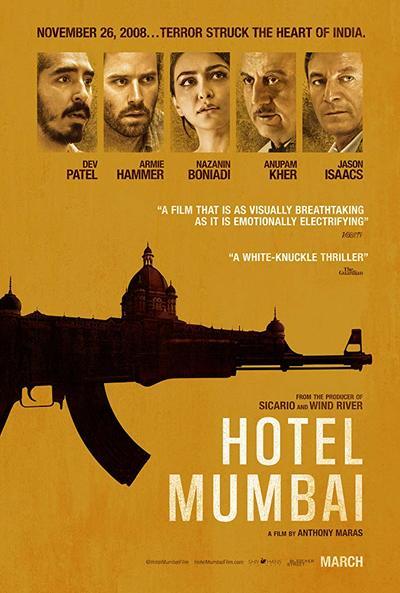 Rated R for disturbing violence throughout, bloody images, and language.