Trinitie Childs (Regina Hall) is the “First Lady” of Wander to Greater Paths, an Atlanta Southern Baptist megachurch run by her husband, Lee-Curtis (Sterling K. Brown). They are 25,000 parishioners strong—or rather, they were 25,000 parishioners strong. When writer/director Adamma Ebo’s film “Honk for Jesus. Save Your Soul.” opens, they are down to five of their former faithful. A mysterious scandal has depleted their ranks, and a documentary crew helmed by an unseen woman named Anita is shooting footage for the Lee-Curtis Childs redemption tour. The disgraced pastor tells his wife that his comeback is going to be like the film “Rocky.” “But Rocky lost,” she informs him. This comparison is the first of many portents of doom.

Trinitie and Lee-Curtis try to keep up airs whenever they’re on camera. Ebo changes the aspect ratio to inform us when we’re seeing the mockumentary footage and when we’re witnessing private details meant only for us. For Anita’s viewfinder, the Childs sit in golden thrones at the front of their empty church, explaining to future viewers certain types of worship like “praise miming,” which is exactly what you think it is. Like all Protestant pastors of this particular sect, Lee-Curtis is all razzle-dazzle, an entertainer who is always on and who has the attire to back up the flash. “I love Prada,” he says as the camera swoops through his massive closet filled with suits of so many colors they’d shame Joseph’s coat. The only thing more outrageous is the Childs’ shoe collection.

Trinitie, on the other hand, is the quintessential pastor’s wife: faithful, supportive and more than a little bit petty. Keeping up appearances seems to be her modus operandi, so it’s no surprise that fate will make her life a living Hell of embarrassments. A scene between her and Sister Denetta (Olivia D. Dawson) a former parishioner she runs into during a shopping frenzy at the mall is a hilarious and realistic exercise in good, old-fashioned Southern passive-aggressiveness. If you are a Church Lady, or if you know one, this scene will ring true while offering all the cringeworthy comedy the situation deserves.

And to where did all the worshippers of Wander to Greater Paths wander? To a new church run by a younger married couple, Keon and Shakura Sumpter (Conphidance and Nicole Beharie, respectively). Heaven’s House church not only makes a very loud and joyous noise unto the Lord on Sundays, it’s grown so big that the Sumpters have to open a second location. Unfortunately for the Childs, that grand opening corresponds with their plans to use that same Easter Sunday for Lee-Curtis’ triumphant return to the pulpit.

“What good are disciples when they are not disciplined?” Lee-Curtis asks when confronted with the accusation that he fired his deacons. “Honk for Jesus. Save Your Soul.” asks the same discipline-based question about Lee-Curtis. It’s pretty easy to figure out just what kind of sexual misconduct he’s been accused of perpetrating, and Ebo gets some mileage out of snippets of a call-in radio show where Atlanta residents voice their opinions. Footage of Rev. Childs’ sermon against homosexuality is used as more than just a reminder of the numerous times my church informed me that Jesus hated me and my LGBTQ brethren. Of course, Lee-Curtis blames the Devil for his sins. “The Devil is a roach under the floorboards” he says. The only way he’d know that is if he were under the floorboards looking for him.

When Ebo concentrates on the satirical aspects that mock the hypocrisy she’s exposing, “Honk for Jesus. Save Your Soul.” hilariously fires on all cylinders. It’s when the film tries to juggle the darker aspects that its seams start to show. The last 15 minutes or so juxtapose some very absurd imagery with deep, painful confrontations. It’s to Hall and Brown’s credit that the film manages to stay afloat. Hall’s face is a wonderland of expressions both subtle and grandiose, and she knows which ones to deploy at the perfect time. Not many actresses could survive playing scenes of devastation in full mime makeup. The last shot of the film mirrors her face with a garish Black Jesus statue Lee-Curtis demanded she use to promote their comeback. Hall milks it for all the pathos it’s worth, and more.

The usually stoic Brown jumps at the chance to go large, showing his comedic chops as if he’ll never get the chance to do so again. Lee-Curtis is a strutting peacock, but he’s also selfish, delusional, and self-loathing. He believes in saving souls, but can’t see that his own is in dire need of salvation. When he drops the showmanship during his practice sermon and gives an Oscar-show clip of an impassioned plea for forgiveness, Trinitie sees right through him. “You need to make it more convincing,” she tells him.

Beharie is just as good as the leads. Her facial reactions are as priceless as Hall’s, and she subtly relishes the schadenfreude of the Childs’ bad luck. When Trinitie politely asks her to move the grand opening of their church, Shakura just as politely tells her no dice. So much of the film’s humor comes from this playacting of niceties. It’s too bad that Ebo can’t successfully stick the landing for the darker scenes.

Still, what is here is choice material, especially if you grew up in the church or currently attend one of the many prosperity gospel megachurches. There’s real bite here, and I can’t think of another movie ballsy enough to include “Knuck If You Buck” and “Never Would Have Made It” on the same soundtrack. Hall and Brown’s car ride performance of the former is today’s equivalent of the "Bohemian Rhapsody" scene in “Wayne’s World.” That these two “people of God” are rapping a profane song just goes to show that even the most devout of us can’t resist a good, sinful set of bars. “I’m not a pervert,” Lee-Curtis pleads at one point, “I’m a sinner!” I’ll leave that judgement up to God and the viewer.

Now playing in theaters and streaming on Peacock. 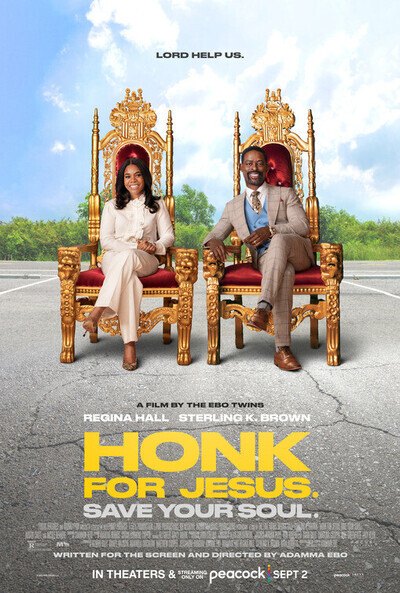