Liam Neeson once again plays a man with a very particular set of skills—safecracking and bombmaking among them—in “Honest Thief,” a no-frills, low-thrills version of the kind of gritty action picture that has marked the veteran actor’s late-stage career.

These movies can be gripping and visceral, as in the first “Taken” and “The Grey.” They can be strained and flimsy, as in the third “Taken” and “Non-Stop.” “Honest Thief” falls somewhere in the middle of that range. It is extremely mediocre, giving its strong supporting cast little to work with beyond car chases and shallow characterizations. Neeson is solid and reliable at the center, as always. He takes everything seriously—every gravelly threat, every gut punch—and at 68, he’s an incredible physical specimen to behold. But while he gives it his all, he’s not getting much in return. Perfectly serviceable and utterly forgettable, “Honest Thief” nonetheless offers a few pleasing details to keep it from being a total slog.

The premise alone is intriguing from director and co-writer Mark Williams, co-creator of the series “Ozark.” Neeson stars as Tom Carter, a legendary bank robber known as the “In and Out Bandit.” (It’s a moniker he loathes, since it makes him sound haphazard, and he prides himself on his precision.) Tom has stolen $9 million from 12 banks across seven states over several years. But when he steps into a Boston storage center to stash all that loot, he immediately connects with the pretty, quick-witted woman behind the counter: Kate Walsh’s Annie, who works there to help pay for grad school. A year later, they’re in love, and he’s so taken by her (pun intended) that he wants to go straight and forge a new life together.

So he tries to turn himself in and turn over all that money to the FBI. Sure, he could have just dropped it off anonymously and started over. But Tom is an honest thief, and he’s hoping that by cooperating, he’ll get a reduced sentence. As patient as he was planning and executing all his crimes, he’s in a hurry to get them behind him. Trouble is, the old-school agents he dials up (Jeffrey Donovan and Robert Patrick) don’t believe him. They’ve heard way too many false confessions over the years. So they humor him by sending their underlings, a scenery-chewing Jai Courtney and an underused Anthony Ramos, to pay him a visit at the hotel where he’s waiting for them. And what should be a straightforward transaction turns violent when Courtney’s Agent Nivens gets the bright idea that he and Ramos’ Agent Hall should take the money for themselves instead.

Such seemingly complicated characters traveling in such murky circles should be compelling. But everything happens so quickly, and with so little build-up of suspense, that the many shady dealings and double-crosses throughout “Honest Thief” don’t register as powerfully as they should. There’s nothing to Courtney’s character beyond greed. Donovan provides some substance as the wisecracking, level-headed agent trying to get to the bottom of the case, and there’s an amusing running bit involving the adorably scruffy dog he inherited from his ex-wife in their divorce. But much of what constitutes the meat of the script from Williams and Steve Allrich is generic car chases, fistfights and shootouts, punctuated by an insistent, percussion-heavy score.

Neeson has a decent, sparky chemistry with Walsh, and there’s a bit more to her character than the typical damsel in distress (although the beating she suffers late in the game is gratuitously brutal). The pieces are there for a stronger film, which makes “Honest Thief” so disappointing. Still, we probably don’t have long to wait for the next vehicle in which Neeson puts his particular set of skills to use. 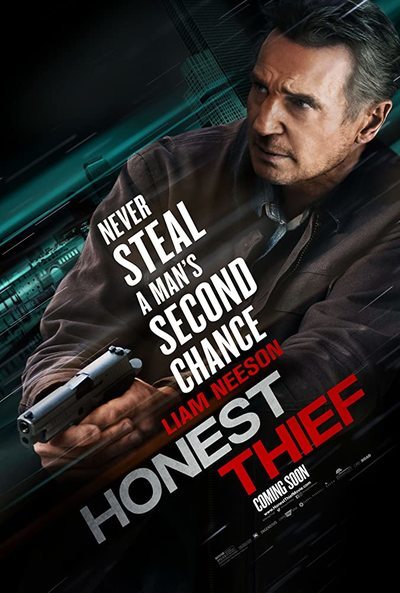