The first time we see Rahimi (Zar Amir Ebrahimi), she’s trying to check into a hotel in Mashhad, Iran’s second largest city. The year is 2001 but the exchange we witness surely could happen in exactly the same way in today’s Iran. When the desk clerk realizes the Tehran-based reporter is a single female traveling alone, he tells her the hotel is full. She replies she has a reservation, then produces her journalistic credentials; he reluctantly gives her a room. Then he tells her head scarf is showing too much hair and that they could get in trouble with the morality police. She scoffs at this though she surely knows the threat isn’t baseless.

It's an eerie coincidence that this scene early in Ali Abbasi’s taut, enthralling crime drama “Holy Spider” resonates so strongly with current events in Iran. As constant news reports have detailed, six weeks ago the morality police in Tehran pulled in a young woman named Mahsa Amini because they thought her head scarf wasn’t properly adjusted. While in their custody, she ended up dead, which set off nationwide protests that are still continuing. Though Iran has seen several popular uprisings against its Islamic regime in recent years, this one is unusual due to a single fact: It’s being led by women.

It's been charged that misogyny is at the heart of the Islamic Republic’s rules that women must cover their hair in public, and the same issue is central to “Holy Spider.” The film dramatizes the true story of a serial killer who murdered 16 prostitutes in 2000-2001. Saeed Hanaei was a laborer and Iran-Iraq War veteran who reportedly began his crime spree when someone mistook his wife for a prostitute. During and after his rampage, he claimed he had God on his side, saying he was on a jihad to rid Mashhad’s streets of its most corrupt elements. Perhaps the most disturbing aspect of his story was that the killer became a hero to some before his execution.

“Holy Spider”’s rendition of this grisly tale is powerful and precise, commendably lacking the sensationalistic tone of some serial killer movies. Abbasi constructs his narrative in three main strands, one following Saeed (Mehdi Bajestani) not just on his murderous crusade but also in the mundane day-to-day of his family life; another observing some of his victims (most of the women are poor and drug-addicted) before their murders, and a third following Rahimi as she tries to investigate the killings, which at times puts her in harm’s way.

From a sociopolitical perspective, the third strand is especially fascinating. While there was a female reporter named Roya Karimi who covered the Spider Killer story—the name came from the supposition that he lured victims into his deadly web—Rahimi is Abbasi’s creation, and she’s a striking and memorable character, not just for her intrepid, methodical way of pursuing the story but also for her self-possessed way of dealing with the men she encounters. One is a reporter who shares information with her (he has tapes of the calls the killer made to him declaring his crimes and disclosing where the bodies could be found) and is collegial enough but also displeases her by revealing that he’s heard rumors about her problems with an editor in Tehran (according to her, she was fired for refusing his advances). Another male, an officer in charge of the case, can’t explain why the police have not a single clue six months into the killer’s spree, but offers to tell her more if she will date him. And then there’s cleric who brusquely rejects the killer’s claims of divine sanction but also seems more concerned with the negative image he assumes Rahimi’s stories will create.

In all of these interactions, we get a clear, multi-faceted picture of many obstacles and challenges that Iranian women face—the menace of serial killers of course being far less common than countless everyday slights. Abbasi’s depiction of this reality has nothing polemical about it; it’s persuasive precisely because it’s so realistic and nuanced.

Likewise, the film doesn’t portray Saeed as some kind of drooling monster. He’s obsessed with his terrible work, of course, but pursues it with a craftsman’s calm deliberateness. When his wife and three kids are off at her parents’, he goes on the prowl on his motorbike, finding a prostitute and taking her back to his apartment, then strangling her with her head scarf (a bitter irony that needs no emphasis). He seems “normal” most of the time apart from his crimes, though there’s evidence of war’s PTSD when he blows up at his son during a family outing.

Though this story has inherent fascinations akin to those of other such tales—and let’s face it, we’re currently inundated with true-crime stories of every description—“Holy Spider” succeeds as a work of art because of Abbasi’s great skills as a filmmaker (his previous film was the endlessly creepy “Border,” which received wide international distribution). Moment to moment, scene after scene, both dramatically and stylistically, the film impresses with its careful control, attention to detail and unerring subtlety. And the performances Abbasi gets from Zar Amir Ebrahimi (she won Best Actress at Cannes) and Mehdi Bajestani are simply two of the most compelling and finely realized that I’ve seen this year.

When “Holy Spider” premiered at Cannes, some reviews called it an Iranian film. But it’s not an Iranian production nor was it filmed in Iran. It’s a Danish-Swedish-German-French co-production, which in some ways reflects Abbasi’s life and career trajectory. Born and raised on Iran, he went to Scandinavia for college, studying architecture in Sweden and filmmaking in Denmark, where he began making films. He reportedly wanted to shoot “Holy Spider” in Iran but was denied permission by the authorities, so he mounted the production in Jordan.

In some ways, that move was both fortunate and necessary. The film’s sexual content, drug use and violence are not excessive by Western standards, but they would be completely verboten in Iran. Given the challenge of filming in another country, Abbasi and his collaborators have done a phenomenal job of conjuring the look and feel of Mashhad, a city of great spiritual and culture import to Shia Islam. Having visited Iran numerous times in the last quarter-century, I was amazed at how authentic “Holy Spider”’s vision of the country looks and feels—a vision bolstering a story that collides provocatively with the headlines now coming out of Iran. 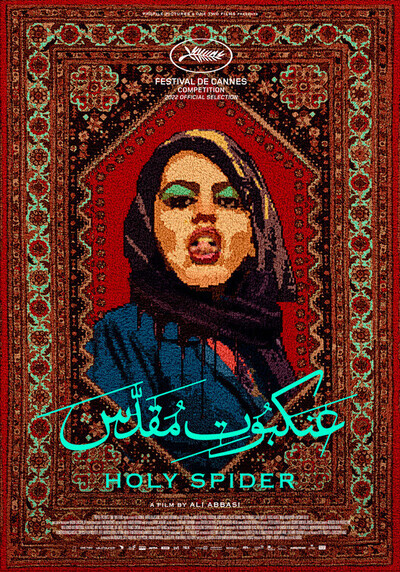