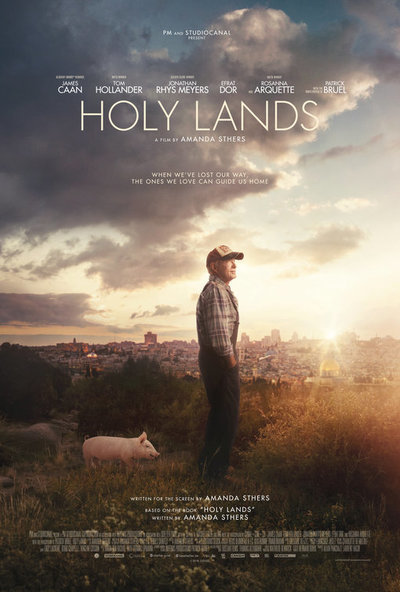 There's a lot going on in the unwieldy melodrama “Holy Lands,” including but not limited to the following characters and conflicts:

1. A cantankerous New York cardiologist (James Caan), who has abandoned his family to start a pig farm in—wait for it—Israel.

2. The unlikely friendship that develops between said pig farmer and the Orthodox Jewish rabbi (Tom Hollander) with whom he’d initially, crassly clashed.

3. The pig farmer’s gay playwright son (Jonathan Rhys Meyers), whose latest avant-garde production is a painfully literal and autobiographical depiction of his estranged father’s disapproval. He doesn’t even change the characters’ names.

4. The pig farmer’s dilettante photographer daughter (Efrat Dor), who’s still reliant on him for money to pay for things like therapy, even though she’s in her mid-30s.

5. The pig farmer’s beautiful and vivacious ex-wife (Rosanna Arquette), whom he claims is a hypochondriac but who may be suffering from an ailment that’s quite serious.

6. The rabbi’s wife and many sons, including his eldest, who’s on the verge of joining the Israeli army.

8. The pig farmer’s actual pigs, who are extremely cute, especially the runt who wears a red bandanna and eats from a baby bottle.

French novelist-turned-filmmaker Amanda Sthers jumps around between all these various plot threads in ungainly fashion. And in adapting her own novel of the same name as both director and screenwriter, Sthers smothers scene after scene in voiceover, as the characters read aloud the florid letters they’ve written to each other. The ones from Rhys Meyers’ David Rosen, for example, go unanswered by his father, Caan’s Harry Rosenmerck, although Harry clearly receives them. The first time we see him, he’s retrieving an envelope from the mailbox, dressed in full farm garb of overalls and a beat-up baseball cap.

“Do you not want to see me? To hear my laughter?” David wonders as he scribbles away on a notepad during rehearsal. “Strangely, the less I see you, the more I become like you.” Perhaps this device worked better on the page; to the ear, these words clang and too often prompt unintentional giggles.

“Holy Lands” follows the travails of a scattered family where miscommunication is the preferred modus operandi. Eventually, they must all find a way to get over their regrets and resentments to reconcile with each other. But there’s so little to these characters beyond a few superficial traits that when serious things happen—and boy, do they happen—it is impossible to be moved the way Sthers intends for us to be. And the patriarch whose absence has caused this devastating familial rift remains the most enigmatic, even though he’s at the center of the story. Has he really moved to Israel just to be near his mother’s grave? And has he really taken up pig farming in the midst of so many observant Jews just to be provocative?

Sthers has amassed such a strong cast of veteran actors that they manage to create some resonant moments now and again. Caan and Hollander have decent chemistry, especially in one scene in which they’re forced to make awkward small talk while they’re stuck waiting together at a bus stop. (Hollander most closely resembles a complete human being in this film, full of warmth, wisdom and humor.) Sthers actually accomplishes much more with her actors wordlessly, their silent reactions to major developments registering more effectively than any flowery narration.

Unfortunately, her tendency more often is to spell everything out. This is especially true in one scene in which Arquette’s character confronts a snarky theater critic for writing a scathing review of David’s play. She throws a glass of water in his face at a crowded restaurant and tells him not to be so mean, a moment that’s meant to be rousing and redemptive but instead rings hollow. And the overstuffed third act features jarring shifts from joy and reverie to gore and sorrow. Even the adorable pigs can’t save us.