Charlie Berns, played by director and co-writer Billy Crystal, is a writer who is so well known for being funny that when his behavior is a little off, everyone thinks he is doing a bit. On stage with Barry Levinson, Sharon Stone, and Kevin Kline, all playing themselves as stars of a fictitious Berns-scripted movie classic celebrating an anniversary, Berns gets disoriented and forgets the names of the other people on the panel. The audience laughs appreciatively; what a cut-up! Stone good-naturedly reminds him: "I'm Meryl Streep." Another laugh. That Charlie!

Charlie's daughter Francine (Broadway star Laura Benanti) is not amused. She thinks he must be drunk or that he does not care enough about her to respond to the invitation to her daughter's bat mitzvah. And his colleagues at a "Saturday Night Live"-style late night sketch comedy show just think it's a quirky eccentricity that he insists on a typewriter instead of a computer.

But Charlie is in the early stages of dementia. He is lonely and he is scared. He holds onto what he can: his routine, as he walks to his job reciting, "Turn left at the stop sign," and the one thing that he has always been able to count on—Charlie is funny. He may not come up with sketch ideas, but he can spot the weaknesses in other people's ideas and make them better, and he also can spot the talent in a shy new writer who just needs a little bit of support. There is nothing funny about losing the core of himself, his memories, his ability to come up with fast, witty comebacks. And so, the only one who knows what is going on is his doctor (Anna Deavere Smith, every bit the warm, dedicated health care professional we all wish for).

Lunch with Charlie was raffled off at a charity fundraiser, and Charlie is looking forward to spending time with someone who was interested enough to bid on him. But the person who shows up is Emma (Tiffany Haddish), who has no idea who he is. She's only there to spite her ex, who was the one who bid just $22 to meet Charlie. And to order a gigantic seafood platter, which immediately triggers an allergic reaction requiring an emergency trip to the hospital. Charlie pays for everything and Emma promises to pay him back. But as they keep seeing each other, they find an easy connection. Having no preconception of who Charlie was allows Emma to see his struggle. And being with someone who knows the truth helps Charlie begin to accept it, and to resolve some issues with his family (how his son got the name "Rex" is a lot of fun) while he still can.

Crystal largely avoids the pitfalls of a movie about friends of different races. Emma is not a Magical Negro and Charlie is not a White Savior. They are not there to teach each other important life lessons or help each other overcome obstacles. They are just good people who get along well. The easy chemistry between the characters reflects the real-life friendship of the two stars and it is clear to see that like Emma and Charlie, Haddish and Crystal get a kick out of each other. Indeed, they get so much of a kick out of each other that Crystal the director was too reluctant to cut their scenes, which impairs the pacing. It would work better with a shorter running time, with some scenes as DVD extras. This is a particular problem in the parts of the movie where we are supposed to see how funny Charlie is. The material for the sketch comedy show in the film is not as funny as the movie needs them to be.

Crystal wrote the script with former "Saturday Night Live" writer Alan Zweibel, who also co-wrote "North," the film based on Zweibel's book that led to Roger Ebert's legendary review: "I hated hated hated hated hated this movie." No one would say that about this film. I liked liked liked it, but that I wish they'd had someone like Charlie to sharpen the script. 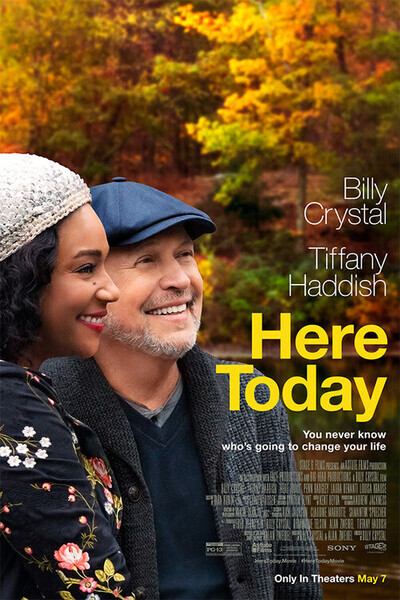