"Herb & Dorothy 50X50" is like a more cheerful version of "The Art of the Steal." That 2009 documentary chronicled how an art collection valued at over $25 billion was moved from its humble environs to a glitzy museum in violation of the express wishes of the person who collected it, and at great profit to the violators. The subjects of this film, Herb and Dorothy Vogel, were faced with similar circumstance, but responded in a way that averted disaster and benefited art fans throughout the country.

The Vogels, whose intriguing story was depicted in the acclaimed 2008 documentary "Herb & Dorothy," were an ordinary New York couple—he a postal inspector and she a librarian. Starting in the early 1960s, they began an art collection with a heavy focus on the then-emerging field of modern, conceptual works, partly because they genuinely responded to those works and partly because they were affordable. Their collection grew to nearly 5000 pieces from artists ranging from well-known names like Roy Lichtenstein, Cindy Sherman and David Salle to those who never quite made it. All were stored in their one-bedroom, rent-controlled apartment. Most of the pieces were done on paper, but there are a few eye-popping shots of the apartment with stacks of paintings jammed into every available space.

Eventually the collection proved to be too much, and the Vogels decided to donate it to the National Gallery of Art, but even that institution was incapable of handling such a bequest; even under the best of circumstances, most of the pieces would have wound up hidden away in storage. They devised an ingenious plan wherein 50 carefully selected pieces would be donated by the Vogels to a museum of their choice in every U.S. state. This would enable the works to be seen by people at venues that rarely received donations of that size and scope, or that have been struggling to simply survive in the face of an unsteady economy.

As the film watches the overseeing the distribution of their collection, the film quietly but effectively raises questions about the very nature of art collection and what responsibilities, if any, collectors have towards their purchases. The Vogels could have either sold their works to other private collectors, or to museums that would have most likely regarded them as just another acquisition to be filed away. By giving their collection away in the way that they have, the Vogels have found a more democratic method of dispersal, one that places artistic value over commercial considerations and allows others to experience the work in ways that will hopefully inspire them as much as they did the Vogels all those years ago.

Some of the most amusing moments come from seeing the ways in which the donated art challenges those who have come to see them in their new surroundings. Some may be experiencing modern art for the very first time. Young children seem to respond the best, maybe because they have not yet been conditioned to think of abstract art as weird or difficult. The adults are more of a mixed bag. Some find a deep connection with the pieces. Others shrug them off. One man says, "I tend to like the ones that are a little more finished."

That said, some of the pieces perplex even their owners. At one point, Dorothy is seen checking a gallery's website, unsure if a black square is a blank spot where a picture of the work in question has yet to be added, or the work itself.

Directed by Megumi Sasaki, who also made "Herb & Dorothy," "Herb & Dorothy 50X50" does not exactly reinvent the documentary form, though I would take its simple and unadorned style over the ham-fisted gibberish that is "Salinger" in a heartbeat. More importantly, the film taught me something of value about a subject that didn't much interest me before. Most of this is due to charm of the Vogels, a couple who dedicated their lives to something that they truly loved, then found a way to pass their enthusiasm on to others, in a manner consistent with their own directness and ability to surprise. As the saying goes, I may not know art, but I know what I like. I like this movie. 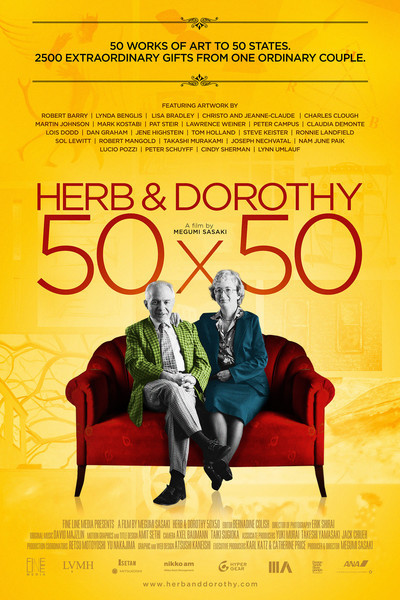 Dorothy Vogel as Herself

Herbert Vogel as Himself

Paula Antebi as Herself - Herb's sister

Robert Barry as Himself - Artist

Lisa Bradley as Herself - Artist

Christo and Jeanne-Claude as Themselves - Artist

Chuck Close as Himself - Artist

Charles Clough as Himself - Artist