"Heavy Trip," a Finnish ensemble comedy about a wannabe black metal band, is probably the only film you'll see this year with a crowd-surfing corpse. Don't let the last part of that sentence dissuade you from seeing "Heavy Trip:" it's a real crowdpleaser.

Granted, many of the film's jokes are at the expense of the small-town residents of Taivalkoski, a little Finnish burg where reindeer meat is sold and the slur "homo" is regrettably used to put down outcasts. Painfully shy metalhead Turo (Johannes Holopainen) is one such misfit: he and his band—later named "Impaled Rektum"—have been practicing for 12 years, but have never performed live once. That all changes when the Rektum bump into the director of a Norwegian metal festival. Their ensuing hero's journey-style story is a heart-felt and surprisingly well-timed comedy with just enough self-deprecating humor to make even the most shop-worn cliches work. "Heavy Trip" is a feel-good comedy about the members of a subculture that simultaneously embraces and pokes fun of its subjects.

You don't even have to enjoy heavy metal music to like "Heavy Trip," though it definitely helps. Turo and his band are good at what they do: Turo's singing voice sounds like a possessed diesel engine; drummer Jynnky (Antti Heikkinen) keeps time even when he's choking on his food; guitarist Lotvonen (Samuli Jaskio) shreds his instrument as quickly and as gracefully as a free-falling rollercoaster cart; and bassist Pasi (Max Ovaska) gives such a solid, low-thrumming foundation to the group's glass-shattering music that he makes even goofy KISS-style ghost paint and nail-studded bracelets seem like reasonable fashion choices.

You can tell that these guys are serious about what they do just from the way that they solemnly talk about metal. Thankfully, their passion is never really the butt of the film's jokes. Sure, Pasi, a part-time librarian, recommends Uruguayan grindcore metal to two unsuspecting patrons who only want to hear Justin Bieber's latest record. And yes, Pasi's fellow band-mates are the kind of guys who have starry-eyed conversations about what their band should be called--"Fetal Death." "Let's not get small children involved in this"—while they push Jynnky's broken down van. Pasi also quotes former Black Sabbath frontman Ronnie James Dio with grave earnest-ness and can recall the opening chords to all his favorite songs by Pantera, Children of Bodom, and Mors Subita. Turo means it when he says "This music is our thing. Other guys can play hockey and drive around chasing pussy. We play metal." And Holopainen's apparent sincerity and conviction makes you want to overlook the wounded macho pride inherent in his second sentence. He convinces you that Turo's crass declaration makes sense in his world, a place where he and his friends are credible under-dogs.

Co-directors Juuso Laatio and Jukka Vidgren and their three co-writers' rare sensitivity and knack for comic timing makes Turo and his group's generally familiar story arc—Impaled Rektum's Norway gig gives them an immediate ego boost, but they become so overwhelmed with their imminent success that they cause an international incident involving a stolen van and an illegally exhumed corpse—that much more convincing. You can see some plot twists coming, just as you can tell that Turo will inevitably overcome his timidity and show local florist Miia (Minka Kuustonen) how he feels about her.

But Laatio, Vidgren, and the gang deserve major credit for nailing their scenario's most predictable elements. They spin things out until eventually, you start to wonder why you're watching the Swedish border patrol attack a "Jesus and the disciples"-themedbachelor party. Thankfully, even this shaggy dog-style scenario pays off. Twice. Laatio and Vidgren are so good at establishing their film's internal logic that it's even hard to find fault with their most seemingly chauvinistic, bro-y jokes, like when Jynnky's reindeer-slaying dad tells Impaled Rektum's members that "The meaning of life is like a clitoris: you move around it, but you can never be sure you've found it." That joke may seem icky, but it's not finished until Jynnky's mom adds "You haven't."

Likewise, a fratguy-worthy paraphrase of "The Blues Brothers"—"We're on a mission from Satan"—isn't over until a Swedish border patrolwoman says "Listen, I love Satan as much as any woman in their 40s. But you're coming up for interrogation right this moment." The rest of the film's jokes are similarly raunchy, but never in a mean-spirited way (Just wait 'til you see how Turo ultimately deals with being called a "Homo"). That spirit of inclusivity makes "Heavy Trip" a cult hit waiting in the wings. Come for the brutal music, stay for the charming DIY optimism. 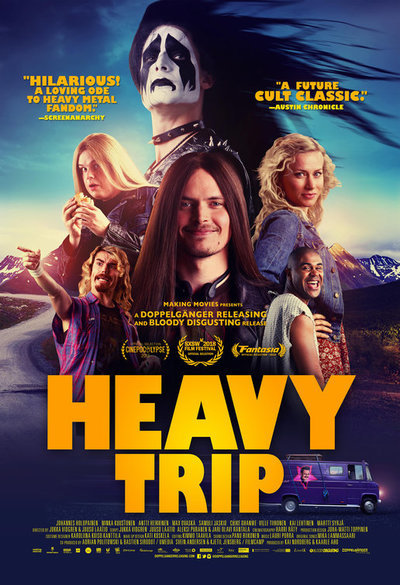