Great movies (and "Ted Lasso") set in the world of team sports find a way to add fresh, distinctive details to the classic formula: talented individual players must learn to put the team first with the help of a wise coach, including setbacks and training montages plus some romantic storylines with some setbacks (and occasional dating montages), leading to triumph. First-time screenwriter Vojin Gjaja, who rowed crew in college, is better at conveying his love for the sport than he is in making us care about the characters. An intriguing note: it is a tradition in some rowing competitions for the losing team to give the winners their team jerseys. Knowing that will help you understand some of what goes on in director Michael Mailer's film, "Heart of Champions."

We first see the team at a fictional Ivy League school, reacting to a disappointing loss to their bitterest rival, Harvard. Their captain, Alex (Alexander Ludwig), berates his teammates and his father (David James Elliott) berates him. We get some sense that this team needs a new direction. Alex's father, a wealthy and influential alumnus, is determined to have his son selected for the Olympic team and has brought in a new coach, Jack Murphy (Michael Shannon). Meanwhile a transfer student, Chris (Charles Melton), has arrived on a rowing scholarship. Both have past traumas and connections hinted at (more like HINTED AT).

But before we can get there, Coach Murphy has to make an impression on the team. In one of the film's highlights, he asks each of them to explain why they are there. Because he told them to meet him there? What he wants is not their task but their purpose. "You are not ready for the water," he says. "A team does not disintegrate and then point fingers at each other." He tells them they are there to learn how to be a team, "how to work together to achieve the impossible."

Another important "why" question: why is Alex the captain? Because he has the top score on the rowing machine. Murphy tells them that strength and speed are important, but "leadership is measured in the hearts of those that follow." He switches Alex out of the leadership spot on the boat and puts John (Alex MacNicoll) there instead. Alex's father is furious. To make it even more painful, because this movie wants to put all of the relationships in italics instead of letting the characters show us what they are feeling, John is now dating Alex's ex, Sara (Lilly Krug). The lessons are in italics, too, to make sure we understand that sports teach us about life.

Chris just wants to keep the lowest profile he can while maintaining his scholarship. He asks to be put on the junior varsity team where he can do the rowing version of coasting. Murphy will not let that happen. As Chris begins to connect to his teammates, it opens him up to another connection, with Sara's best friend Nish (Ash Santos, the most natural performance in the film).

There will be conflict between Alex and his dad about doing what's best for the team versus what is best for his Olympic aspirations and between Alex and John about rowing issues and about Sara. There will also be training exercises and drills that initially seem "wax on/wax off" and "use the Force" peculiar but turn out to have profound lessons. The Force equivalent here is "Swing" (an earlier title of the film), referring to the kind of instinctive coordination only possible after training and teamwork.

When we are not watching the rowing, gorgeously photographed by Edd Lukas, we are stuck with thinly sketched characters who have backstory revelations instead of layered interactions. There is a lot more telling than showing. A completely unnecessary act of vandalism is never addressed along with some other storyline disconnects, suggesting some poorly thought-through last-minute recuts.

There is also an un-earned tragic twist that throws off the movie's pace and tone. Adding Chris to the team may be an effort to skirt the sport's long #rowingsowhite history of excluding BIPOC athletes, but pairing him with the only other major character of color is reductive. And the only other character of color is ineffectual and marginal. Addressing the issue more directly would have given the movie a far fresher and more interesting setting for its beautiful images of boats in glistening water.

There is no sporting event more beautiful than rowing. "Heart of Champions" makes such good use of the sun glistening on the river as the slender boat slices through the water, with oars almost balletic in their perfectly synchronized sweeps barely disturbing the calm surface, that we almost forget its predictable storyline and one-dimensional characters. 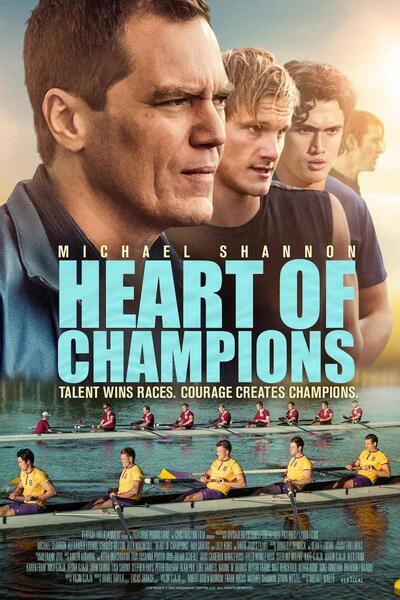